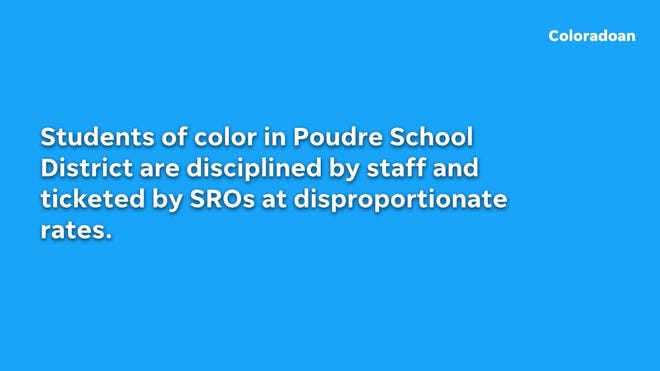 Last June, Poudre School District’s board of education voted 6-1 in favor of keeping student resource officers in its schools — but with one caveat.

The board instructed the school district to complete a “comprehensive review” of the SRO program to determine whether it should continue, pledging that the board would vote again the following year after hearing the district’s findings.

Thus, the Community Advisory Committee, or CAC, was created.

While this group wasn’t the only part of the district review, it had a large role and was tasked with ultimately making a recommendation to the board regarding the future of SROs.

On Tuesday night, that recommendation — or at least a majority consensus— was delivered.

Related:PSD students of color are twice as likely to be disciplined as their white peers

The group told the board it could not come to a consensus on implementation of its findings, but the majority opinion was that PSD should remove SROs from its schools “to reduce the likelihood of potentially traumatic experiences for students.”

The group proposed that SROs be replaced with “police liaisons” who would patrol nearby areas, but would not be an ever-looming presence in school buildings.

In this model, “officers would be assigned to patrol areas adjacent to their designated schools to reduce response time when called to the school to address issues consistent with the consensus recommendations.”

Board members were receptive to the presentation and thanked the presenters and committee for their hard work over the course of eight months, a number of them noting it was now their turn to act on the recommendation and make change.

“We may or may not implement everything that’s in that report, but there’ll be some changes, at least if I have anything to say about it,” said board vice president Rob Petterson.

The CAC acknowledged that its suggestion could not be implemented overnight and there would be challenges, such as creating oversight and monitoring to make sure safety concerns are addressed, but 11 of the 15 members supported officers’ removal from PSD schools.

Johanna Ulloa Girón, program director for The BIPOC Alliance and a CAC representative who presented the decision, said the lack of consensus was “a good indicator” of how hard the group worked to achieve middle ground.

“Overall what you’re going to find is a group of people where nobody left super happy about the end result,” she said. Ulloa Girón noted that all committee members recognized the current SRO model is problematic and needs some kind of change; the implementation was the only place consensus was not achieved.

The four dissenting committee members “felt strongly that SROs remain embedded in the schools,” citing response time to violence. These members did recognize that BIPOC students being referred to law enforcement disproportionately was “a large concern,” but that improved data collection and understanding of roles could be the solution.

While there was not unanimous agreement on how to implement the recommended changes, the CAC reached consensus on 50 different items, something that board member Kristen Draper, who worked with the CAC, said she wouldn’t have imagined possible in the beginning of the process.

“I know that this was a very challenging time … and probably not your favorite thing to do every week,” Draper told members of the CAC. “But I also know that what you did is going to make Poudre School District better.”

When should law enforcement be brought in?

As part of its recommendation, the CAC outlined situations that should, and should not, involve law enforcement in school settings.

The report made clear that the committee knew “many of the roles SROs currently play are essential,” but that a number would be better provided by mental health professionals or social workers.

The committee recommended SROs not respond to nonviolent incidents in schools, minor drug offenses, serious drug use or disorders or threats of suicide. The group also determined it’s not appropriate for SROs to be the sole people able to sign off on mental health holds, develop risk and threat assessments, serve as a guest speaker in classes, conduct emergency drills if students are present or build relationships with students.

When asked why officers in schools shouldn’t work to build relationships with students, Ulloa Girón answered on behalf of the CAC, saying that the district shouldn’t be paying police to build good relationships, that’s simply something they should do as a part of their job.

Erin Wilson, a Fort Collins High School senior who presented the recommendation alongside Ulloa Girón, said SROs “shouldn’t be going out of their way” to build relationships knowing that some students are not comfortable with their presence.

The committee also detailed situations in which police should be the first response: emergency response to violence inside of a school; serious drug sales, offenses or investigations; emergency response to violence outside of school grounds if students are involved; sexual assaults and other crimes with a victim; implementing risk and threat assessments; emergency planning; missing children; and co-responder checks.

The CAC also requested that there be broader training for officers who may respond to events in schools and more clear expectations for how police respond. They also felt there should be detailed reports kept and data collected that should be accessible for the community.

Board president Christophe Febvre said the board of education is planning to discuss the CAC’s recommendation at its upcoming meetings and “give guidance on whether and how to proceed with negotiations with the police departments” that work with the district.

Wilson, who is graduating next month and plans to study education in college, said she felt lucky to have spent eight months working on something that will be a “catalyst for change, regardless of what that might end up looking like.”