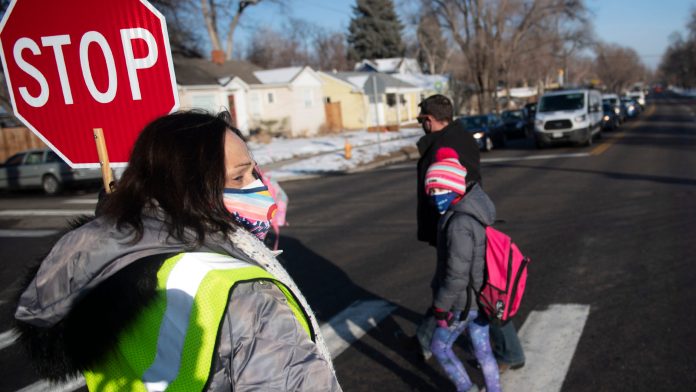 Poudre School District will spend approximately $40,000 to provide advanced traffic control at six elementary schools for the remainder of this school year.

Lightfield Enterprises Inc., a local concrete and construction group, was signed on in an effort to better manage and control increased traffic congestion at elementary schools following the return to in-person learning last month. Starting Feb. 8, Timnath, Bethke, Bacon, Zach, Tavelli and Eyestone elementary schools have had assistance from Lightfield.

“These are actually traffic control specialists, they’re actually licensed and certified to do this type of work to control these intersections and these entrances and exits. So we felt like that was a safer option for us,” PSD’s executive director of operations Matt Bryant said.

Lightfield is providing seven people to the different sites in PSD “to help the traffic flow ingress and egress out of our school sites,” Bryant said. He added that because schools now have to stop traffic on active roads instead of just in parking lots and pick-up areas, it was safer to contract the work out to professionals than have existing school staff do the work.

The traffic monitoring happening at these schools is more similar to what one sees driving through a construction site than a school drop-off, PSD spokesperson Madeline Noblett said.

Bryant said that while the traffic control help has been well received and effective, PSD does not expect to expand these services to other elementary schools or high schools.

Though it’s too early to be sure, Noblett said the district doesn’t expect these services to continue in the fall, providing busing is able to increase.

Bryant said normally the district would be busing between 13,000 and 14,000 students, but due to COVID-19 safety protocols, only about 3,000 are being bused.

The district has made a number of other efforts to relieve the increased traffic around its elementary schools and allow for distancing.

Schools have adopted staggered bell times so not all students are released at once and implemented the use of technology so a student can wait inside until his or her parents have arrived. Traffic monitors have also been hired across school sites to help with dismissal and arrival processes.