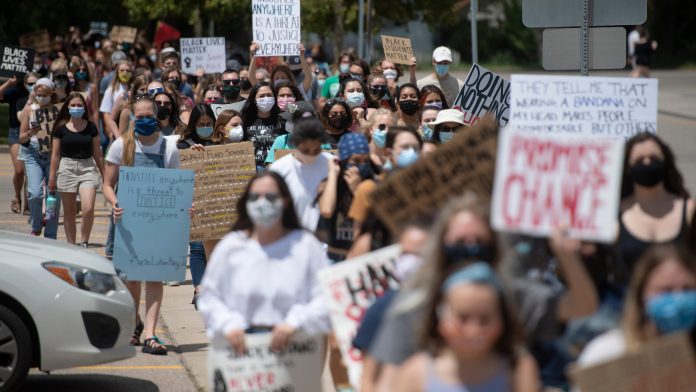 Addressing issues of equity, diversity and inclusion against the backdrop of a global pandemic is proving to be slow, painstaking work for Fort Collins’ public education leaders.

“Our community can expect us to listen to diverse thoughts and opinions as we move forward. We recognize that these are challenging and difficult times, and we will only succeed with your perspectives and input,” Poudre School District said in an email update on its equity, diversity and inclusion efforts, also known as EDI, on Feb. 10.

The district’s update shared progress made in four areas — inclusive leadership, curriculum, professional development, and climate and culture — since PSD amped up the EDI team last summer. It was signed by the board of education, along with representatives from PSD, PSD’s language, culture and equity department, and the district’s three unions representing teachers, executives and classified employees.

John Robinson, president of the teachers union at PSD, said in an email that this work “is a step in the right direction” and his organization looks forward to working with the next superintendent and school board in the future “to give equity, diversity and inclusion for all staff and students the dedication it deserves.”

But the update didn’t detail many concrete steps toward improvement.

John McKay, director of PSD’s language, culture and equity department, said that’s in part because equity work can be hard to measure and PSD is simultaneously in phases of “investigation, discovery and action” around its equity goals.

“I think that what you’re seeing right now, in this most recent statement, being able to say, these are the things we stand for,” McKay said.

“I don’t want to use a framework, because I don’t think that we’re there yet to say that ‘this is officially our framework.’ But these are the areas that we absolutely are working on in response to what our community has said.”

As the perfect storm hit in summer 2020 with nationwide social justice movements and a pandemic that shined a light on inequities in education, the district’s governing board felt there was an opportunity to engage with EDI work, said board president Christophe Febvre.

PSD spokesperson Madeline Noblett said, “This is long-term work that we’re talking about that will have impact for decades to come, when done well.”

Noblett added that if done right, “the work of equity is never done.”

But what has been started in terms of equity at PSD?

When asked for concrete examples of change since the summer rather than things the district hopes to implement in the future, McKay pointed to the creation of student and staff equity coalitions that meet monthly.

He also said they’ve had growing interest in the Equity Diversity Advisory Council, made of members of the community, which he said is being reinstituted to better reflect community wants around diversity and inclusion. Applications to join that committee will be released in the spring, McKay said.

He said these groups are in their early stages and the work is not completed, but “we’ve got processes that are up and running” and will be refined as the district learns what does and does not work.

“The worst thing that we can do is do nothing,” McKay said. “And I’m proud of our district because we’re doing as much as we can right now.”

The district is also creating a bias incident reporting mechanism for students and families to use to report incidents that happen to them. McKay said they hope to pilot this in the spring. A library of resources to support educators, staff, students and communities with EDI efforts is also being created to live on the district’s equity, diversity and inclusion website.

Development for employees and board members who want to learn more about incorporating equity and inclusion into their work has been introduced, though it remains optional at this point. One mandatory training that McKay said served as an “introduction to EDI” was required at the beginning of the school year, and more are in the works.

The update also stated that PSD curriculum will be reviewed “to determine where bias exists in our materials and to determine whether they meet our EDI standards,” but there was no further information on when this would begin.

One major item introduced in the update was the creation of a fifth district end (or goal) for the board of education. This end, which serves as a leading goal for the board, “will have associated benchmarks to assess measurable progress,” said the email.

While no date was provided to the community, Febvre told the Coloradoan the board hopes to look at a first draft as soon as March. Once the end is adopted by the board, Febvre said he expects to see measurable change.

“It will further change and further drive the behavior inside the district. So we’re very excited about that,” he said. “It is top priority to the board.”

The board seemed to acknowledge this criticism at its Feb. 16 retreat. Board members discussed not rushing the creation of the end and making sure the language is as inclusive as possible and the timing is right.

Kristen Draper, a board director who has worked with McKay on the language in the end, told other directors she and McKay had discussed that people are “tired of hearing about diversity, equity and inclusion right now … they want their kids in school.” Surveys in the community have shown that there is substantial interest in EDI efforts, but the board recognized community focus is currently on other things.