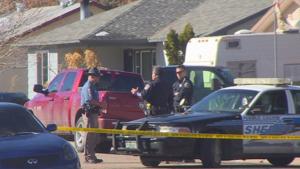 Police say the district attorney will decide if body camera footage and the 911 audio call will be released once the investigation is complete.

A crying woman could be heard during the 911 call to the police department, along with a male in the background who was making threats, police said. Sgt. Franklyn Ortega confirmed the threats on the 911 call matched with what officers heard at the home in the 3200 block of Rex Street.

Officers forced their way into the home due to concerns of the woman, police said, where Estevon Cruz was reportedly armed and fired at officers. The investigation later revealed that Cruz fired a CO2 pistol.

Four police officers are currently on paid administrative leave, which is routine following an officer-involved shooting.