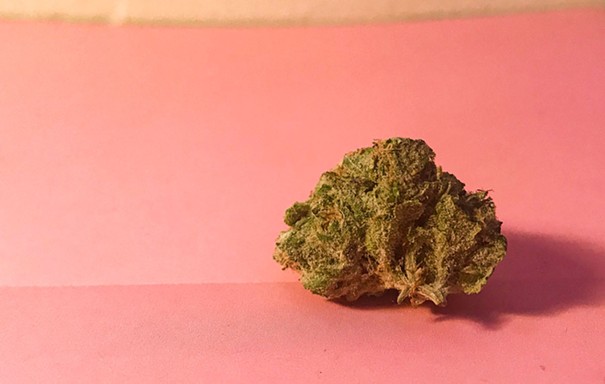 We must begin with this noxious, goofy-ass name. We’re in straight-up sleaze territory with this Alaska-originated Indica/Sativa hybrid combining Peyote Purple and Thunder Fuck Mountain (TFM) called Purple Mind Fuck — a combination of words and associations conveying the vibe of say, some flyover state morning shock jock wearing Affliction gear and giving away free Five Finger Death Punch tickets (which he would call “tix”): DRUGS! SOMETHING LOUD! THE WORD “FUCK”! EDGY! Oh boy. This strong and singular strain though has little to do with any of that and is instead a tad psychedelic, unmooring most of what’s around you, which is at first terrifying and exciting after that and lastly, curiously calming (THC’s at 28 percent here).

I guess all of that might constitute a “mind fuck” but dear G-d, let’s try and find another way of saying it. There’s an essay in writer and filmmaker Hito Steyerl’s 2012 book The Wretched of the Screen titled “In Free Fall: A Thought Experiment on Vertical Perspective” that discusses (among other things) this idea that our present moment lacks (metaphorical) solid ground in most ways that matter and with that, a lack of linearity, which means we are all in a sort of figurative free fall.

Maybe the best way to think of this is the disassociative jumble of the internet (better yet, the endless, depressing scroll of Netflix) but it also has to do with “alternative facts” and generally, postmodernism getting a little too postmodern for most of us, leaving us with little to firmly wrap our minds around. “With the loss of horizon also comes the departure of a stable paradigm of orientation, which has situated concepts of subject and object, of time and space, throughout modernity,” Steyerl writes. “In falling, the lines of horizon shatter, twirl around, and superimpose.”

Well, Purple Mind Fuck does something like that to you. It eliminates the horizon, it extracts you from wherever you are and leaves you indefinitely hanging — “in free fall,” which can feel dramatic and scary or like nothing is happening at all. Purple Mind Fuck’s effects snuck up on me and I only got the latter. Frozen, hit with a Zen-ish joy celebrating our awful colonial holiday, I was in the moment, and then a series of associations hung in the air, never quite connecting, a cut-rate clarity that gave way to a chaotic mind spew brought on mostly by a decrease in anxiety I imagine.

I didn’t mind letting my mind fly and maybe even sounding a bit like a dumbass. Usually you understand a heavy high like this in terms of plateaus or phases, but this is more like a maze (Steyerl again: “The horizon quivers in a maze of collapsing lines and you may lose any sense of above and below, of before and after, of yourself and your boundaries”). A high you wander with, an incontinent, beatific buzz.

Freaking out when a crazy person approaches you: 2