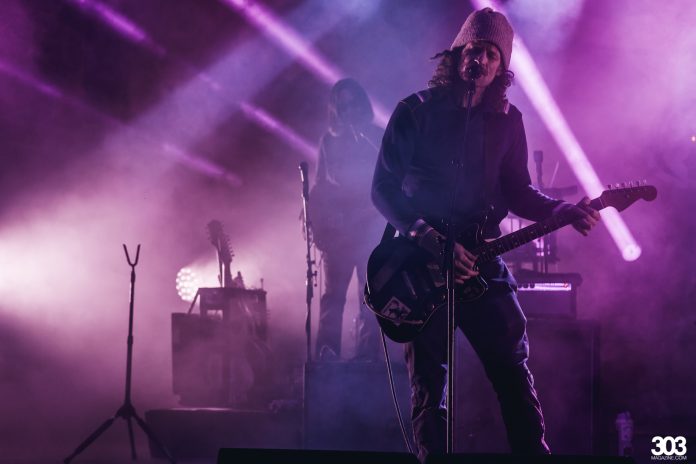 Lately, it feels like every headline in the mainstream is full of bad news. With the current tumultuous political climate, many are looking for ways to unify and bring people together. However, while finding ways to bring people together is one of the beautiful things that artists and creatives work towards, there are plenty of artists who would rather focus their creative work towards standing up for what they believe in. A long-time fan of protest songs, Chadwick Stokes is one of the few artists who successfully points out injustices without losing hope for a better future.

A founding member of the indie-folk band Dispatch, former frontman of State Radio and solo artist, Stokes is an activist at heart and his art provides his platform. His most recent release, Chadwick Stokes and the Pintos is an album full of protest songs that carefully walk the line between desperation spurred by current social issues and optimism that things will change for the better. Stokes is currently touring on that album and will end his run of shows with two performances here in Colorado later this month. We caught up with Stokes ahead of those two shows to talk about the music, his work as an activist and where the two overlap.

303 Magazine: I was able to catch Dispatch’s show at Red Rocks this summer, which was tons of fun. At that show, you focused on raising donations for Pine Ridge, how did that go?

Chadwick Stokes: It went great. I didn’t go, but we were able to, over the course of a couple of days, we were able to put up – for a foster home – we put up a fence all around their property so that the kids could play outside. For complicated reasons, the kids couldn’t go outside on the reservation because there was all of this danger of being kidnapped. So, a fence allowed the foster home to kind of let them go out and keep an eye on them without worrying too much about losing the kids. It was really neat to see it go up. Brad [Corrigan] was FaceTiming me during the day. 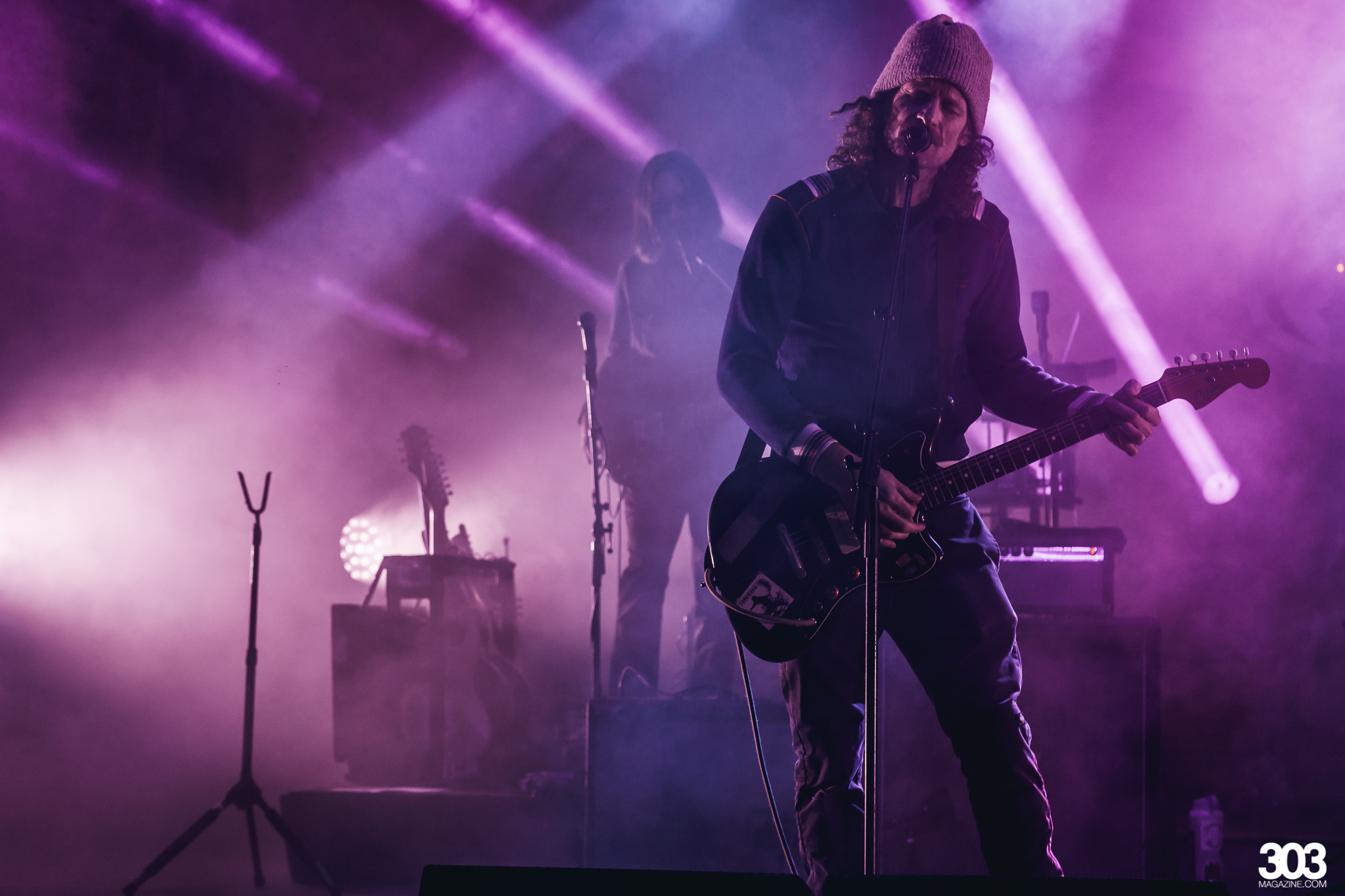 303: You’re involved with a number of projects like this, specifically your nonprofit, Calling All Crows, can you talk to me about that?

CS: Typically, it’s based on women and girls and the rights of women and girls and gender equality. We’ve done all sorts of projects along those lines, but the last couple of years have been all about the sexual harassment that happens in the music industry. We’ve done a bunch of active bystander training. We’ve trained thousands of people on some tools or coping mechanisms for if you’re affected or if you see something happening in the live music world.

303: I saw that you talked about that specifically pretty recently, can you talk to me a little bit about why this is a topic that was important for you to address?

CS: A couple of years ago we had an incident with a volunteer at a show. And we weren’t really sure what to do or where to go or how to kind of process it – or what protocol we had in place. So, we did some research and then created our program so that we can create our own protocol but also so that we could lend to others those same ideas. It’s really cool how it’s been picked up by big promotion companies, festivals and other bands. It’s nice to see it spread a little bit.

303: You do a lot of work with nonprofits and causes that are important to you. So, it makes sense that your latest self-titled album touches on similar themes. Can you talk to me about how those two things overlap?

CS: Well, they’ve always conveniently overlapped or intentionally overlapped, I suppose. I really feel like – I’ve always liked protest music and always leaned on it. So, I think Calling All Crows is a little bit like the chicken or the egg. We started Calling All Crows so that we could be effective out on the road and galvanize that fan experience as far as it going beyond just going to the show. Just trying to do service and activism along the way. I think – you know, when I work on writing, often the songs reflect some of the different causes that we’ve adopted as Calling All Crows.

303: As a general theme throughout the album, it seems like each song finds a balance between the struggle of some of those causes and hope for the future, does that feel true to you?

CS: I really believe – because of the work we do with Calling All Crows, I see so many young folks who are driven to make a change in the world and to fight for what they believe is right, against depression and also remove stigmas. I think that because of the swath of people that comes through the Calling All Crows volunteer world, I see so many cool people and it really gives me optimism for the future. So, I think that theme – while we touch on things that are dire, whether it be PTSD with a returning veteran or the way Native Americans have been treated in this country historically, I tend to be pretty optimistic as to where we are going.

303: One of my favorite songs on the album is “Let Me Down Easy,” can you talk to me about the inspiration for that song?

CS: It’s a pretty old song, but it’s kind of based on – I can remember, especially in my single days, talking to someone who has called randomly to ask a survey or to pay a telephone bill. And sometimes the encounters on the telephone were longer or shorter, but sometimes there was such a nice connection. Almost like falling in love with that person, I guess is the fantasy that that song plays on. But then it goes even deeper as to be a real defeatist – the protagonist in the story is so defeatist that even though he goes on this fantasy of what their life could be like together, eventually she cheats on him and he’s left alone again. So, he kinda goes – while she is being very professional and just talking to him about an unlimited telephone plan, he is way off in his daydream. It’s built up with all these details and everything, and then they hang up and he’s left with this interaction that was kind of bittersweet.

303: I think that as a concept that’s a really interesting way to look at those encounters. I think that those kinds of daydreams probably happen more often than people realize in their everyday life since we all romanticize things to be more meaningful than they maybe really are.

CS: It’s neat to have the fantasy but the reality within the fantasy is not good. It’s interesting to have a fantasy that’s defeatist in nature because usually, fantasies aren’t – you know, they’re fantasies for a reason. But he’s such a basket case that even the fantasy doesn’t work out. 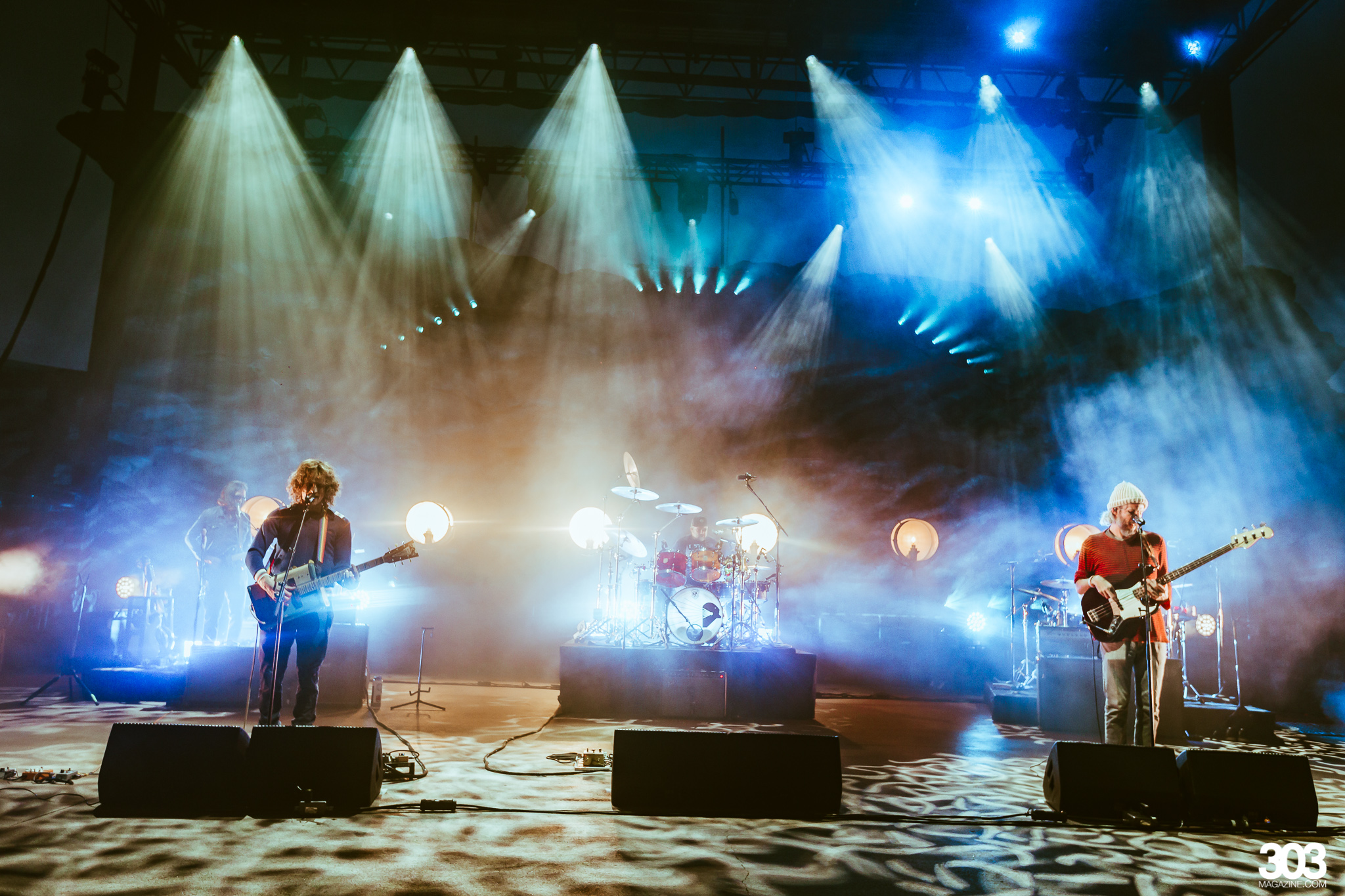 303: One of the more commonly discussed songs on the album is “Blanket On The Moon.” Can you talk to me about that song?

CS: I think for me, that’s the centerpiece of the record. It kind of started like my tribute to David Bowie. He passed away during the time when I was working on that song. It’s about an alien family that leaves their child on the moon hoping that the earthlings will adopt their child. It’s a thinly veiled concept that has to do with our own immigration system, but also the truths of these parents having to put their six-year-olds on trains or in the hands of a smuggler coming from El Salvador or Honduras. And making these incredibly perilous journeys as kids, but it’s better than what they’re leaving. That concept is just so wild to me.

303: That sounds like a theme for a very modern protest song, which you mentioned you’ve always loved. I know that you also draw inspiration from Bob Dylan and The Band, which are very prolific protest songwriters. Do you feel like those kinds of songs have a bit of extra weight when viewed in light of the current political climate?

CS: I would say, in my lifetime – I thought the Bush years were full of plenty of shit to cry out against. These years with Trump are even worse. For me, there’s been no other time in my life that’s been so acute in terms of people need to speak up, need to vote, need to believe in one another. This system of the super, super-rich and super-powerful against everyone else trying hard to make ends meet is really unsustainable and unjust. I think it’s a great time. I hope that it inspires artists everywhere in all different mediums to make art that inspires the movement for justice. 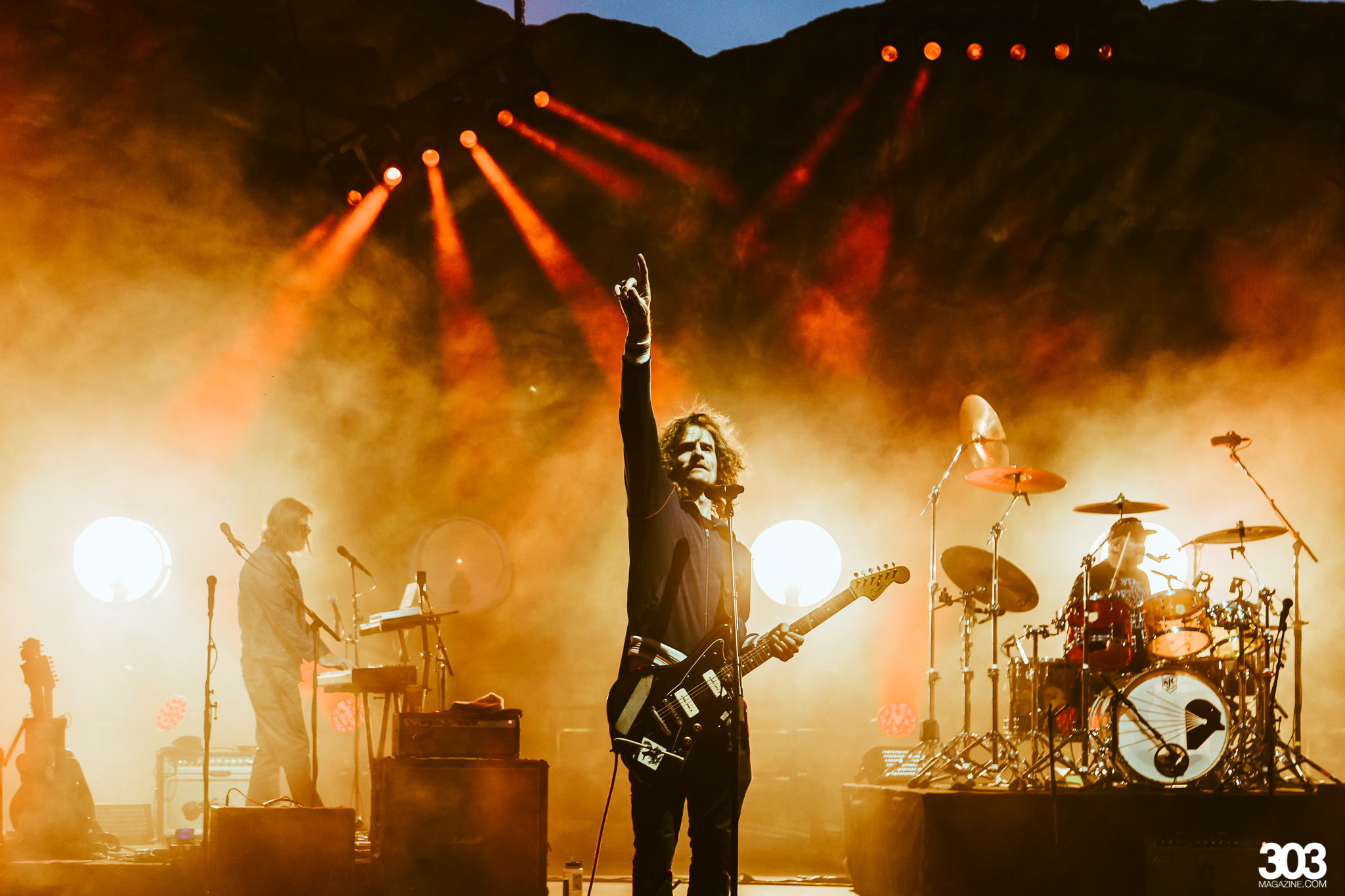 303: You’re preparing to wrap up this tour, and it’s a particularly interesting time to be touring with an album like this with the impeachment proceedings that are currently happening. Does it feel like the attitude surrounding these shows have a different energy than some of the other shows that you’ve played?

CS: I don’t know. I feel like it’s a really interesting time to be playing and talking about the messages and politics within the songs. I feel like I’ve been part – you know, like when I was in State Radio, those shows had an anger to them that I feel like we don’t quite touch on with me and the Pintos. But we’re close. We go near to it, especially with a few songs. It is an interesting time. Some people want to talk – all they want to do is talk about it. And other people, all they want to do is escape it. So we come up against both ethos out there.

303: The last two shows of the tour will be here in Colorado, the first at the Fox Theater in Boulder, and the latter at the Bluebird Theater here in Denver. Is there anything you’re looking forward to about your final shows here in Colorado?

CS: I’ve always loved being in the Denver area and Boulder. We have a lot of friends out there. Brad from Dispatch lives there, he’ll probably come up for a few songs. We’ll continue to do our bystander trainings. It’s always a thrill to play there. We’ll be coming through the Rocky Mountains to get there, and that’s always exciting. It’s a fun time of year to be out there and just to be around the mountains and some old friends.

Chadwick Stokes and The Pintos will perform at the Fox Theater in Boulder on January 24. Tickets are available here.

Chadwick Stokes and The Pintos will perform at the Bluebird Theater in Denver on January 25. Tickets are available here.

All photography by Brandon Johnson unless noted otherwise.