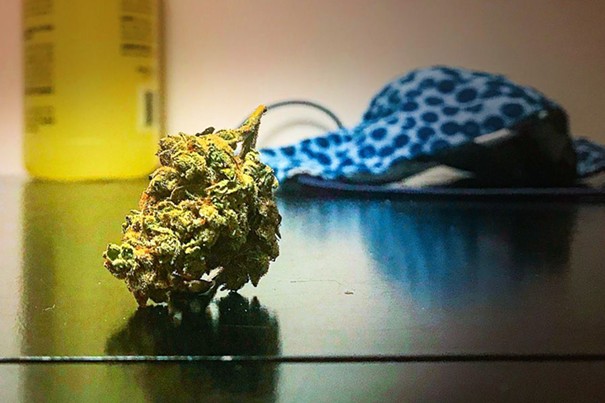 No doubt due to COVID-19, the name “Qleaner” had me thinking of the suddenly terrible-seeming, psychedelic pandemic world we’re moving through right now.

One that looks like it has always looked and yet is, if you stop and think about it for more than a second, possibly (likely?) teeming with that virus underneath the familiar. It is mind-blowing in the worst way. Each doorknob or park bench or person or carton of eggs at the grocery store is a threat. And the hand sanitizer or bottle of cleaner you’re carrying around because it’s the responsible thing to do and helps — or at least, can’t hurt — is your only line of defense.

But the effect of Qleaner, a combination of Querkle (a cross of Purple Urkle and Space Queen that gives off “a sustained feeling of contentment that didn’t drift into lethargy,” as my fellow reviewer Baynard Woods said last year) and Jack’s Cleaner (which is The Cleaner and Jack Herer, which I described as “very strong and rather subtle, reasonable yet rueful,” a while back), it turns out, is cleansing.

You feel like you’re molting on this stuff or even at its worst (like if you smoke a tiny bit and just get the low-THC edible jitters) purging something. And it happens very fast: Qleaner promulgates itself within seconds and the Sativa-dominant makes your mind go all around in different directions while the physical effects toil inside you, like something unwanted — I want

to say “like a sickness or virus” but that has lost any of its metaphorical use during a pandemic — has posted up with no intention of budging.

Pressure, especially around the legs and feet, weighs you down and makes you numb and then seemingly, weightless and horizontal — like you’re floating in the tub or um, being abducted by aliens. There is no comedown though (like none at all, it’s uncanny), just the sudden release that gets you back to normal and no worse for wear, as if you’ve shed your skin.