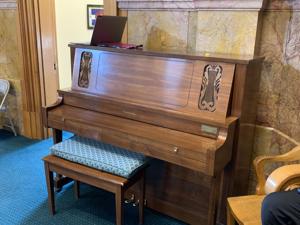 For your listening pleasure: the title of most talented pianist in the state Capitol in all likelihood belongs to Colorado’s own Piano Man, Senate President Leroy Garcia, D-Pueblo.

And the state Senate now has a piano worthy of his talents, and for anyone else now or in the future who likes to tickle the ivories, especially as a stress reliever.

The nonprofit group Armchair Samaritan donated a rare 1984 Baldwin Acrosonic console piano to the state Senate this week. The group fixes up and has donated more than 100 pianos to low-income families so that their children can learn the instrument.

The piano, which when it was in production retailed for around $8,000, came from a Boulder home, according to Douglas Evans of Armchair Samaritans. What makes the piano unique is the slatted cabinetry next to the soundboard as well as its tone, described as a “brilliance of tone that has a bell-like quality.”

Garcia told the Senate Monday that the donation will forever serve as a reminder of the good deeds of Evans and on behalf of the less fortunate in Colorado.

The piano’s inaugural performance came courtesy of “Rocking Jay” Wyshak, a local entertainer and piano tuner who will keep the Baldwin up to snuff. He performed the theme to the 1980s TV show “Taxi.”

Later, Garcia showed off his musical chops. He plays the piano for his church on Sundays, but his talents aren’t only liturgical; he’s also working on a pretty complicated Billy Joel piece at the moment, too.

The Senate piano joins the one that has resided in the House since 1992 — a Baldwin concert upright donated by millionaire businessman Bill Daniels. These days, however, the piano is rarely used; the last person to play it with any regularity was Rep. Alexander “Skinny” Winkler, R-Northglenn, a musician and owner of an audio-visual production company. Winkler, however, only served 43 days in 2018 session, so the piano gets little use.

With a piano in the House and Senate — and hopefully pianos that will get played — Colorado joins a short list of states whose legislatures have pianos.

The piano at the Washington state capitol, for example, is a beaut. It’s an 1893 Blüthner grand piano, made in Leipzig, Germany, and transported to Washington in the 1930s. It was donated to the legislature in 1990 and restored in 2017.

According to the website of the Washington legislature, the piano has a “light rosewood veneer with the black accent moldings,” turned legs, fret-work music desk, and carved acanthus leaf decorations on either side of the ivory keyboard. And according to the website, that restoration was needed because it was used.

Then there are the twin Steinways in the Oregon legislature. The first was gifted to the Oregon House in 2017. It was played in an inaugural dedication concert at the beginning of the 2017 legislative session. The Oregon Senate followed a year later with its own Steinway, with an inaugural concert performed by Thomas Lauderdale, Hunter Noack, Katie Harman and the von Trapp Family Singers.

No word on the possibility of a duet or an inaugural concert on the new Senate keyboard.