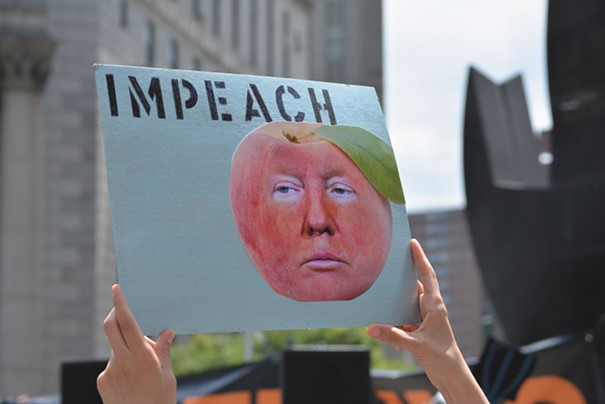 If there’s anything I learned from watching all those hours of House Judiciary Committee impeachment hearings, it’s not that Matt Gaetz is a shameless slime bucket or that any time Jim Jordan speaks, we gain a deeper understanding of all that’s wrong with America or that Texas Republican Louie Gohmert is, well, irredeemably Louie Gohmert (who beats out, by some distance, the fact that Ken Buck is, well, forever and always Ken Buck).

The thing is, since I’m paid to pay attention to the work — if you want to call it that — of Congress, I already knew all that.

No, what I learned, to a degree beyond what I had imagined, is that recovery from the Trumpworld era will not be quick and will definitely not be easy, regardless of whether Donald Trump wins in 2020 — I shudder at that thought, which seems increasingly possible — or whether he’s defeated. It could literally take a generation to undo the damage.

Win or lose, Trump won’t go away. He’ll still spend most of his day watching Fox News and tweeting ugly shots at, say, a 16-year-old who won’t have to frame phony magazine covers declaring she was once Time’s person of the year.

But the victory of Trumpism is not about the staying power of Trump himself. It’s already a cliché to say that the Republican Party is now the party of Trump. But never was that so obvious as it was in these hearings. Although Joe Biden may insist that beating Trump will bring back a new era of governance, a few hours in front of a C-SPAN-tuned TV puts that notion entirely to rest.

The idea of bipartisanship in almost any circumstance has been under threat for a long while, long before Trump arrived on the scene. Now the storm has fully gathered. The idea that Trump will be humiliated by impeachment doesn’t change much. It just means Trump will set new tweeting records once there is a Senate trial. During Dec. 12’s marathon impeachment hearing, Trump tweeted or retweeted — according to the people who actually count these things — 115 times, although one counter had it at 123.

You know, there was a reasonable Republican argument to make: We risk an addiction to impeachment as a political weapon. There is an election in a year. Even if you or I think Trump’s abuse of office meant he had to be impeached, that doesn’t mean there’s not some credibility to a let-the-people-decide argument.

Over the last few months, a few House Republicans have said that, yeah, that phone call to Ukraine President Volodymyr Zelensky was out of line, but it doesn’t rise to the level of impeachment. That’s not what we heard in the hyperpartisan hearings, though. Instead, most Republicans didn’t really bother to defend the infamous July 25 call so much as simply saying — despite all the evidence — that Trump did nothing wrong.

They could have said — as some moderate Democrats were hoping — that a strong, bipartisan censure vote would do the job. That was a bigger pipe dream than believing the Senate will vote to convict Trump. Long ago — like, last week — I thought it was still possible for a few Senate Republicans to vote to convict. Now I’m not so sure.

House Republicans basically took the Trump line that he was right to withhold desperately needed military aid because of worries about Ukraine corruption, and that in his “do-us-a-favor” ask for an investigation of the Bidens, he was asking for a favor for America and not Trump. As if a) there’s any evidence that Trump cares about corruption in Russia or North Korea or Turkey or Saudi Arabia or Egypt or Indonesia or China or anywhere else, including and especially in the Trump White House, and b) a lot of “us” think it’s right for a president to threaten to break Ukrainian knees if they don’t agree to dig up dirt on a Trump political opponent.

That was clearest when Gaetz went out of his way, on several occasions, to slime Hunter Biden, who, let’s agree, made a very bad choice in taking a well-paid seat on the board of Burisma, a corrupt natural gas company. And though the younger Biden was nothing more than a vehicle for Trump to get at Joe Biden, Gaetz delighted in reading one more sad account of his addiction issues. One Democrat, meanwhile, wondered aloud if a certain Republican should go there, given (he didn’t name Gaetz, but he didn’t have to) that the certain Republican had once been arrested on a DUI. Gaetz wasn’t charged for some reason. Neither was Hunter Biden.

But as Democrats repeatedly pointed out, Biden was on the Burisma board in 2017 and 2018 when Trump had no problem sending military aid to Ukraine. It was only when Joe Biden so prominently stepped into the Democratic primary race that this became an issue for Trump and Rudy and the gang.

All that is pretty obvious. The rough transcript of the phone call makes the case look pretty obvious. Those in the Trump administration who risked their careers to defy Trump and testify under oath to Trump’s abuse of power made it all pretty obvious. But half of Americans, according to polls, don’t think it’s obvious, or obvious enough. And Mitch McConnell, meanwhile, has promised, in a conversation with Sean Hannity no less, that he’ll run the Senate impeachment trial any way Trump wants.

I don’t know if you heard Gohmert saying into an open mic that Judiciary Chair Jerry Nadler’s decision to end the hearing late Thursday night before a vote was “Stalinesque” because it interfered with members’ travel plans. OK, open-mic hyperbole is forgivable. Stalin, as you know, was infamous for show trials, in which the defendant’s guilt was pre-ordained. But I think there’s a different point to be made here: What do you call it when the fix is in for the guilty party to walk free?