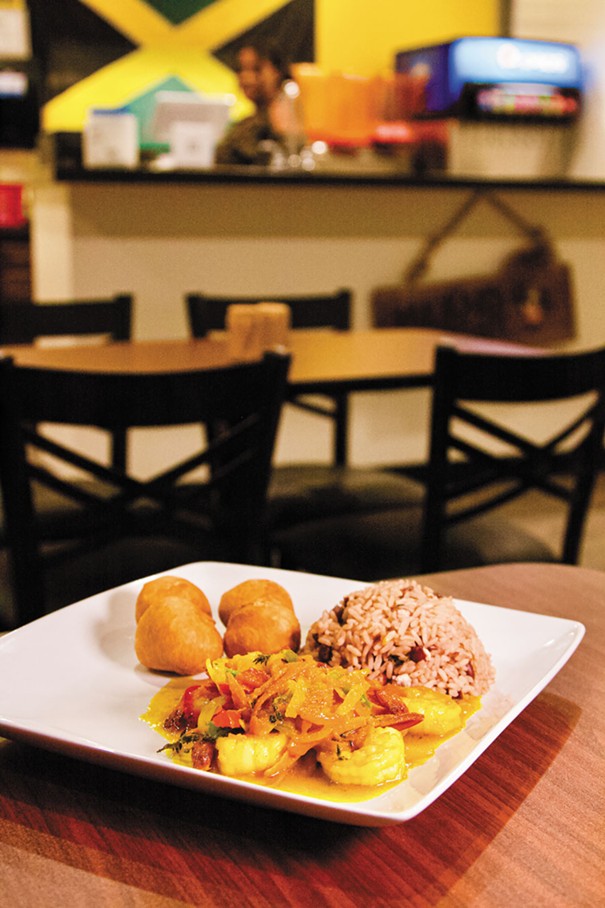 As the northeast area of Colorado Springs around Banning Lewis Ranch continues to build out toward Falcon and add food and drink spots, we take heart in finding yet another independent outfit open — or, in this case, a transition and re-open.

Island Delight dished Jamaican cuisine at 3735 Bloomington St. farther south along the Powers Boulevard corridor, starting in late 2015. But chef/owner Carlene Francis says this newly built space suits her better, next to Korean Garden North and JAKs Taproom Dublin. Originally, Francis had opened Jamaican Flavor on South Academy Boulevard, before selling it a year later to deploy to Iraq. After returning to the U.S., she stayed in the defense contracting industry up until the opening of the first Island Delight, where she changed the menu up to differentiate it, she tells me.

Here, that menu remains in place, as a reflection of Francis’ time growing up in Savanna-la-Mar, the capital of Jamaica’s Westmoreland Parish. She insists it’s authentic to island style, and her front dining area represents reggae culture well, with multiple Bob Marley posters and a proud Jamaican flag accenting red booths and stark yellow walls.

Main plates range around $10 to $15, each feeling appropriately portioned for the price. Though be ready to pay beer prices ($5.30) for the house punches (non-alcoholic). We try a sappy-sweet, bright orange mango-carrot, and Jamaica’s traditional Christmas-drink-turned-year-round-pleaser, Sorrel, made with the eponymous citrusy-sour perennial herb spiked with allspice and ginger and sweetened to balance. (Taken to-go, it sips superbly at home with rum added).

We start with a likable, minced beef-stuffed Jamaican Born Pattie, basically a mildly seasoned empanada with its dough oddly food-colored to a sweet potato hue. And we pick up ample side options, as each entrée comes with two. Savory Johnny Cakes smell almost like donut dough, a sweetness wafting out in the air with the core’s steam released in a bite. Plantains never disappoint, and neither does a simple, crunchy cabbage slaw or crisp sautéed veggies. Fries are from-a-bag boring but fine, and rice and beans rate serviceable too.

Doubling down on curry feels like a good idea because of the cold night outside, and our shrimp curry arrives as a heap of shredded bell peppers and onions atop plump, tail-on prawns. Yellow curry dominates the flavor, which is fine by us and proper, while our curried goat too arrives bearing a thick sauce puddle, mainly brown, but yellowed at its edges to reveal an overall similar finish flavor. The difference being faintly tangy goat meat instead of quiet shrimp, with carrots and potato chunks for a hearty stew makeup. As usual in Jamaican spots, whatever tender and fatty meat hasn’t already fallen from the little bones must be chewed off, making for sticky fingers and napkin slaying. No complaints.

Over the years, we’ve learned never to miss a chance for ackee and salt fish, Jamaica’s challenging-to-some national dish. Island Delight’s rates equal to others’ we’ve tried, accurately salty (hence the name) from preserved white fish and texturally eggy from the brain-matter-looking African fruit bits (appetizing, I know, but it’s what comes to mind, no pun intended). Like our whole meal, it tastes Jamaican-true and expressive of limited ingredients and mild spice, but bright seasoning. Sincere.