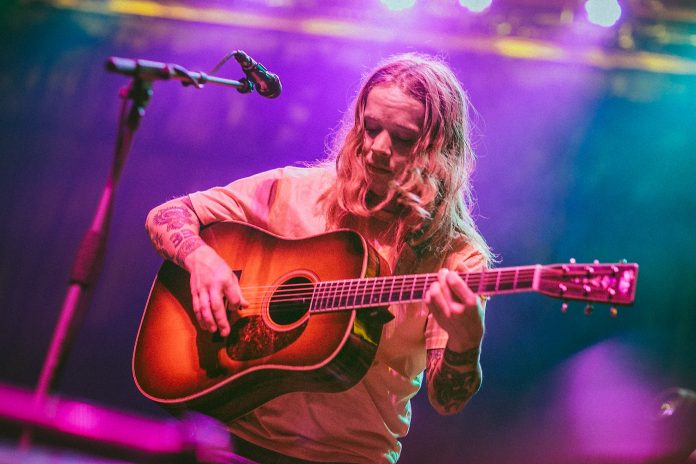 It’s a common sentiment that the bluegrass scene hasn’t seen a come-up like this in a long time. With a wait nearly an hour-long that lasted down three Colfax blocks, bluegrass junkies stood in line and braved the cold to catch the hottest thing that has happened to their music scene in a long while. The love affair between Colorado and the 27-year-old guitar prodigy Billy Strings is mutual, which was made clear on the band’s Facebook page following the first of three nights at the Ogden. “There’s always an amazing, palpable energy in the room whenever we play Colorado. The people here just light it up and it makes us want to play our asses off.” And that’s exactly what they did. 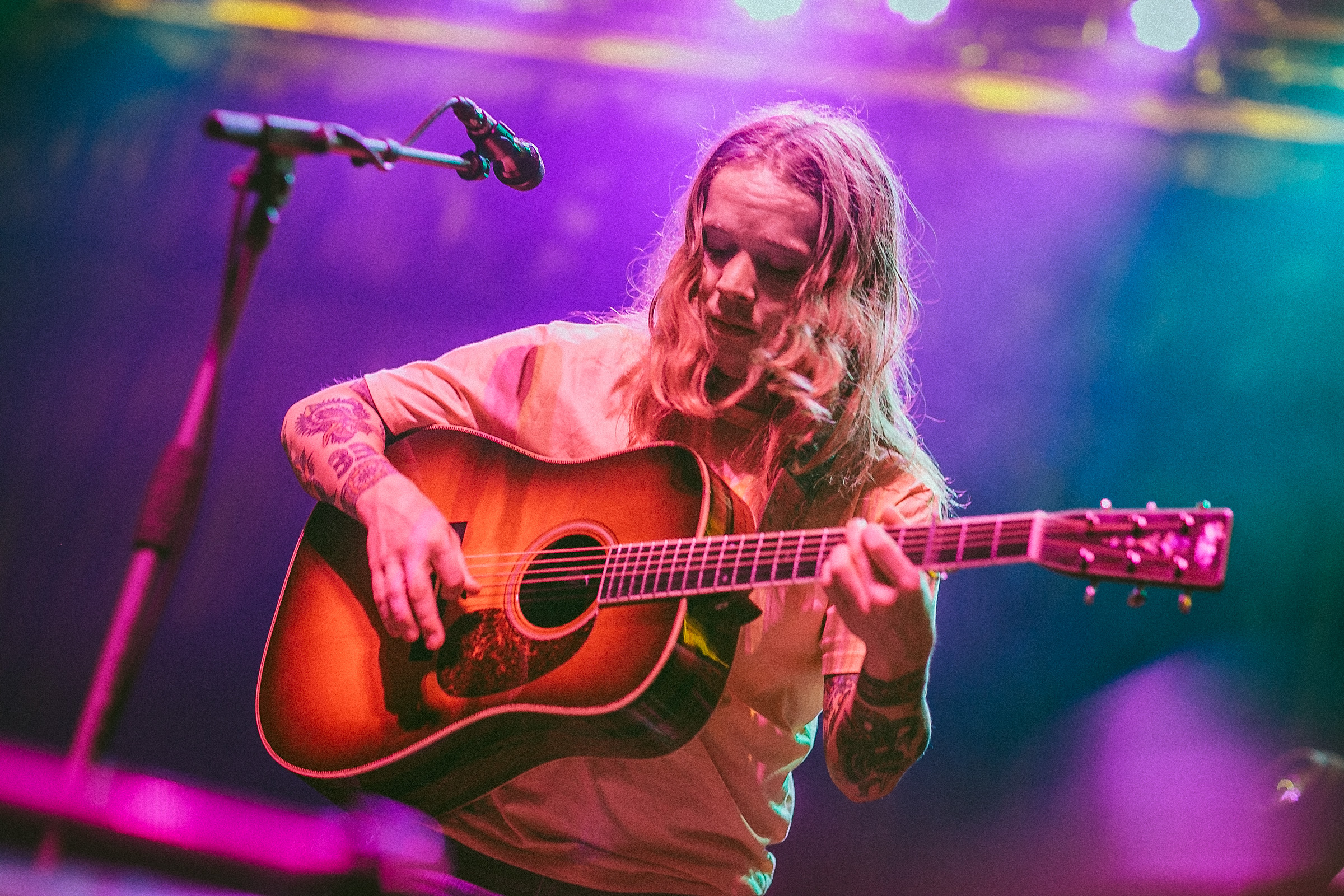 Strings, also known as William Apostol, backed by banjoist Billy Failing, mandolinist Jarrod Walker and upright bassist Royal Masat, blew the roof off of the Ogden and then lit the place on fire and burned it to the ground. The barn-burner of a weekend started strong and grew exponentially tighter and hotter as Friday turned into Saturday turned into Sunday. We were on deck the second and third nights to catch the aggressively anticipated shows, where we witnessed the unprecedented energy and tremendous showmanship of the great Strings and his troop of heavily talented pickers.

Saturday night’s set included exactly half of the Home album, which was released earlier this year and is an absolute masterpiece from start to finish. Of the 14 songs on the album, Saturday’s show saw seven of them — “Taking Water,” “Hollow Heart,” “Enough To Leave,” “Running,” “Away From The Mire,” “Long Forgotten Dream” and “Highway Hypnosis.” More original tunes found their way into the mix, including “Doin’ Things Right” and a real rowdy performance of the song that is arguably what caught the world’s attention and pushed Strings into the spotlight, “Dust In A Baggie.” 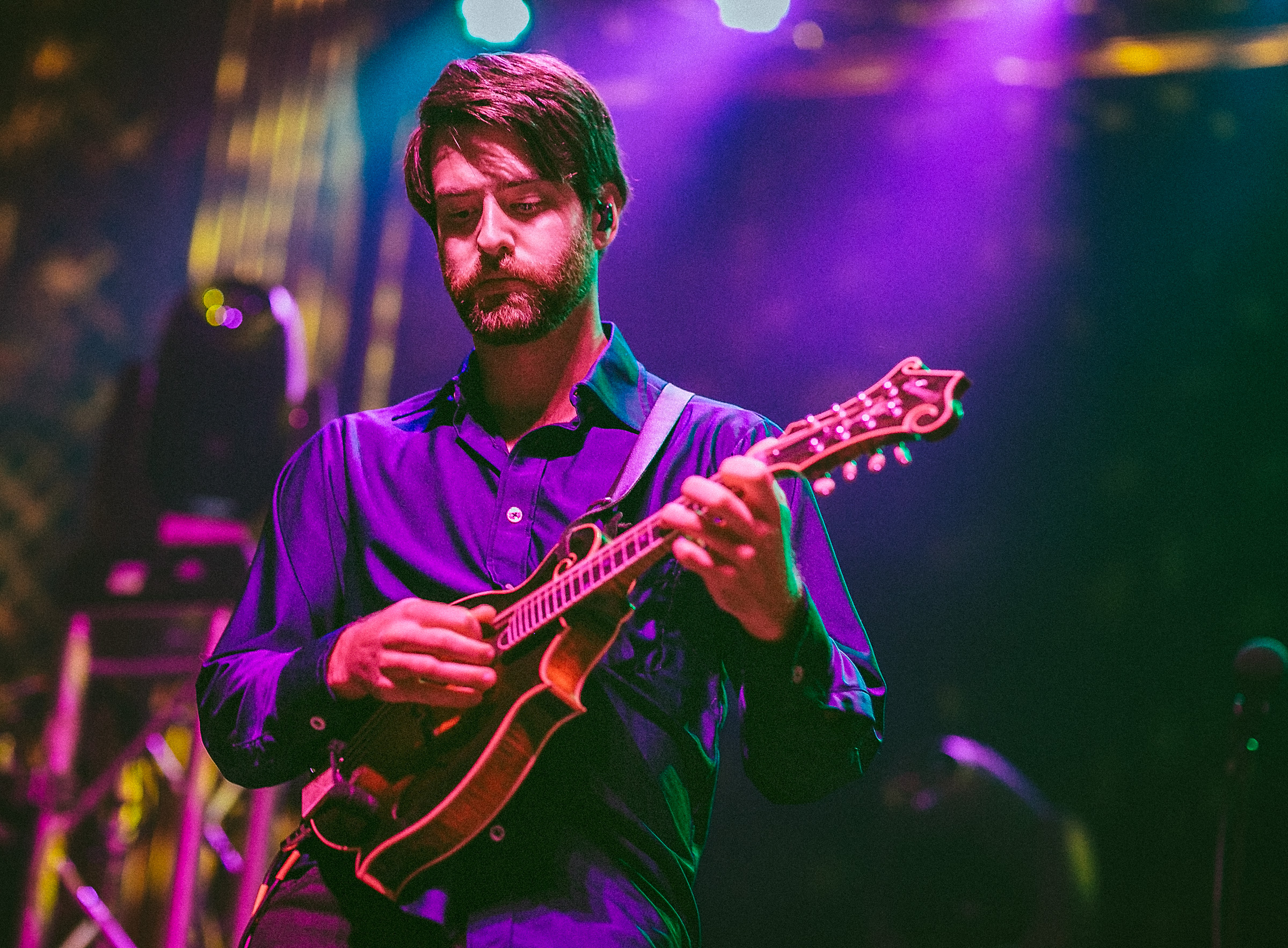 Cover songs were bountiful throughout Saturday’s show, and Strings is a pro at figuring out just exactly what’s going to make his crowd go nuts. Some covers were traditional bluegrass, like “Sweet Blue-Eyed Darlin’” and “Nobody’s Love Is Like Mine.” Others came out of left field entirely, like Jackson Browne’s “Running on Empty,” Jimmy Cliff’s “Sitting in Limbo,” and a hefty tease of The Monkees’ “Last Train to Clarksville.” And what would a bluegrass show be without some Grateful Dead? In this case, it was a rendition of “China Doll” that came before Strings’ own incendiary “Meet Me at the Creek.” To close out the evening, Failing, Walker and Masat followed Strings and his solo guitar through an acoustic version of The Eagles’ “Seven Bridges Road.” 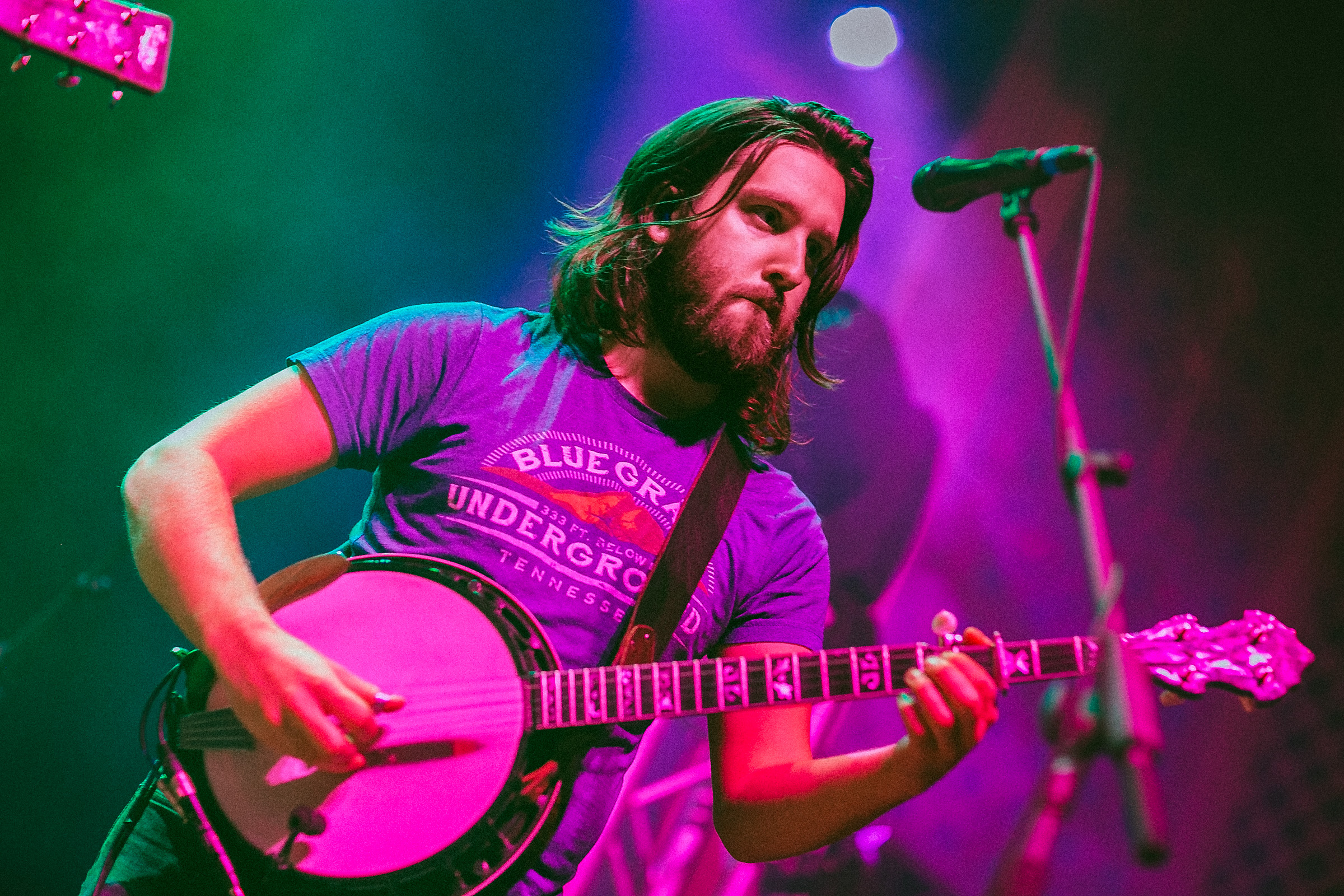 And just when we thought it couldn’t get any better, Sunday happened. The remainder of the Home album came this night, including “Everything’s The Same” and the album’s title track, “Home.” Strings’ choice of cover tunes for the night hit the bullseye, with classics like Little Feat’s “Willin’,”  The Beatles’ “And Your Bird Can Sing,” and Cher’s “Believe.” The best covers, though, are those of his closest musical peers and contemporaries. The version of Yonder Mountain String Band’s “Sorrow is a Highway” left a hushed crowd with goosebumps, and a lengthy and raucous rendition of the String Cheese Incident’s “Black Clouds” brought the first set to a booming close.

Speaking of covers, the highlight of the evening was undoubtedly John Hartford’s “All Fall Down,” the performance which proved that Strings is an all-out rock star. He can sing, he can rap, he can whip his hair back and forth, all the while keeping the steadiest pace with his band members, a foursome so tight and synonymous you’d think they’ve been doing this for decades. The combination of Failing and Walker flanking either side, savagely tossing mandolin and banjo licks back-and-forth, with Masat laying the rhythm down on the upright, creates the perfect space for Strings, the fearless leader. 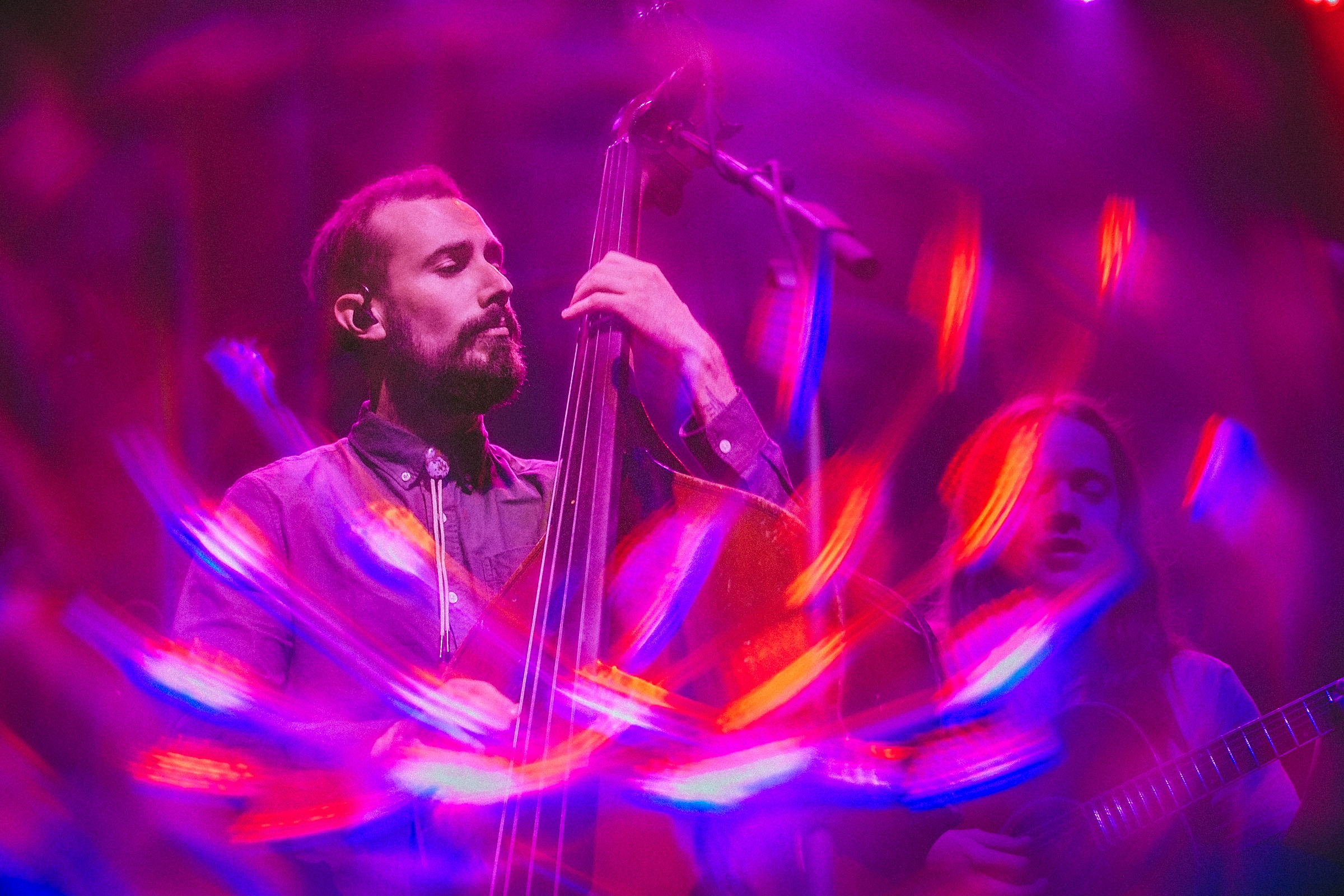 The second set also saw performances of the traditional bluegrass anthem “Red Rocking Chair,” Black Sabbath’s “Planet Caravan, and the Stanley Brothers’ “Little Maggie,” a song that the band has translated to fit impeccably well into their live catalog. Saving some of his best original work for last, Strings blew our minds just one more time with an extensive, jammed-out “Turmoil and Tinfoil” to wrap up the second set. The encore was again acoustic, with the foursome huddled around a single microphone, with only a guitar and a mandolin for accompaniment.

Dedicated to the hippies in the audience, Strings, Failing, Walker and Masat gave us one last taste of greatness with a comically ironic version of “If Your Hair’s Too Long, There’s Sin in Your Heart.”

All photography by Marla Keown. See our full gallery here.