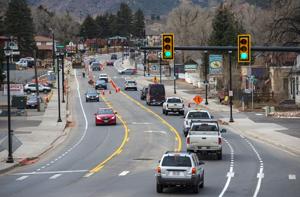 With a crane towering overhead and construction workers directing traffic nearby, local officials from across the Pikes Peak region held a ribbon-cutting Friday — for a project that isn’t done and already over budget.

The reconstruction of a 1.5-mile stretch of West Colorado Avenue was supposed to be finished in late 2018. Now, final work is expected to continue into 2020, according to the project’s manager.

But that didn’t stop nearly a dozen local dignitaries from touting the $43 million effort’s “substantial completion” and the partnerships that made it possible during a nearly hourlong ceremony at Garden of the Gods RV Resort.

A plaque was unveiled to be placed on the nearby Adams Crossing bridge, with raw rebar still jutting from its southern stone walls and red dirt still piled around it.

Orange flags waved in the breeze and Wildcat Construction’s heavy machinery stood by as students of the Colorado Springs Conservatory chorused, “Let’s cut this ribbon — we can hardly wait,” while singing a song they prepared for the special occasion.

“Today, we get to say, ‘We’re close. We are finished, and it’s a wonderful thing to be able to cut the ribbon today,’ ” said Colorado Springs City Councilman David Geislinger, the Pikes Peak Rural Transportation Authority’s board chairman.

The Westside Avenue Action Plan has transformed Colorado Avenue, from 31st Street to U.S. 24, from a four-lane road to a two-lane thoroughfare bisected by a center turn lane. It’s now flanked by bike lanes, streetlights and new sidewalks.

Still, there are gaps in the sidewalk to be filled and light poles to be installed, county project manager Brett Hartzell said. Midland Trail tie-ins need to be completed, as does the last of the work on the new bridge.

Two pedestrian plazas — one at Ridge Road and another near the Manitou Springs arch — also must be finished, Hartzell said.

While most of that work will be completed in the next month or two, landscaping and construction of a water quality pond will continue into next year, he said.

The revitalized span was once known as No Man’s Land, a dilapidated patchwork of local jurisdictions between Old Colorado City and Manitou Springs.

El Paso County took the lead on the project, which was primarily funded by PPRTA sales tax. Colorado Springs Utilities, the Manitou Springs Urban Renewal Authority and the Colorado Department of Transportation also pitched in funds.

The cost has risen from about $30 million when the project broke ground in early 2017. But the scope was expected to expand, as was the price tag, Hartzell said.

County officials said last year the project’s major components would be finished by late 2018, and impacts on traffic this year would be minimal. Since then, officials have twice said that more time would be needed.

The county told The Gazette in June it would all be done this fall.

Officials have blamed the delays on a variety of unexpected obstacles, from torrential rain and underground boulders to raccoons and other critters that absconded with wires and pipes.

“I’d like to thank those companies that have been a part of and a partner to all the work we had to do here. This has been very, very difficult for them because of the interruptions in their businesses,” said county Commissioner Stan VanderWerf, whose district includes the corridor.

“But going forward, we will see so much more economic growth in this area,” VanderWerf told the ceremony’s audience.

Next to the festive display, drivers on the bridge continued to navigate lane shifts and orange traffic cones that have been the bane of the stretch for nearly three years.