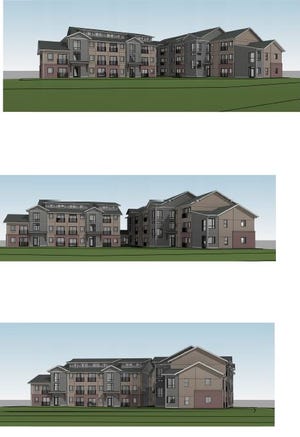 After withdrawing plans for a 54-unit apartment building on Prospect Road following neighbors’ objections, developers are back with a smaller proposal for Haven Apartments near Colorado State University’s Canvas Stadium.

Fort Collins developers Robin and Christian Bachelet have a long-term land lease with the property owner, Colorado State University Research Foundation, or CSURF, to develop the 1.2-acre site at 730 W. Prospect Road, adjacent to their Apex apartments, which opened in 2017.

They withdrew their previous proposal for 54 apartments in an L-shaped building with a 10-foot buffer on the east after neighbors objected and the Fort Collins Planning and Zoning Board showed little support for the project.

The new plan includes a new three-story, 48-unit apartment building, converts two existing single-family homes into two-family units and increases the buffer with its eastern neighbors to 25 feet, as required by city codes, with a row of 8-foot evergreen trees.

“We worked hard to address neighbors’ concerns,” Robin Bachelet said. “Redesigns are never an inexpensive proposition. It creates a hardship, but we are committed to the community and wanted to make the project likeable and something that will work for years to come.”

The smaller of the two existing homes, a designated historic landmark, cannot be demolished. The larger home was built for a town doctor whose mother lived in the smaller home. Together, the dwellings were treated as a set in terms of historic review and preservation efforts.

The previous project had support from CSURF, city planners and the city’s Landmark Preservation Commission. It integrates the site of Apex apartments with the new project creating traffic flow and joint parking throughout the two parcels.

Business:313 Larimer businesses are certified to ‘level up.’ They’re stuck at Level Orange for now

According to plans filed with the city’s planning department, the development will have a smaller-scale residential feel by reusing the existing single-family homes and installing shrub beds and lawns along Prospect Road.

order to emphasize the historic character of the lot,” developers said. The building steps down as it extends closer to the existing historic home.

Because the Bachelets withdrew their project, they had to wait six months before it could be reconsidered.