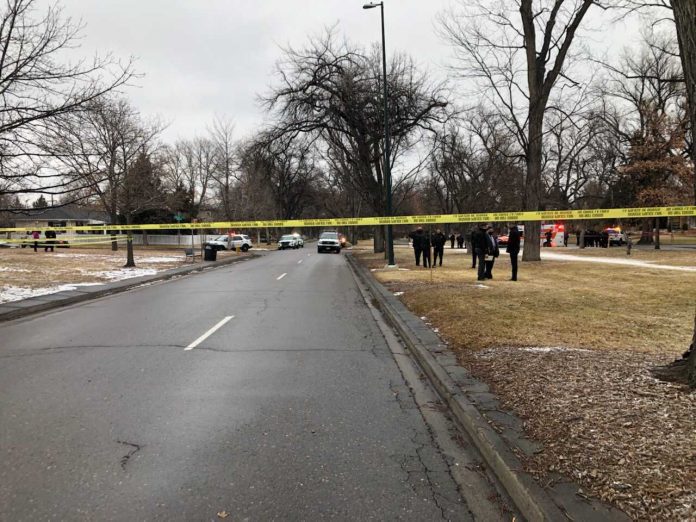 DENVER — A second suspect has been arrested in the killing of a man at a home off Monaco Parkway in Denver earlier this week, police said Friday.

Another suspect, 38-year-old Joshua Hamm, was arrested Monday, as the incident unfolded just after 11:20 a.m.

A third suspect was shot and killed by police during the incident as he attempted to carjack three vehicles, the third of which he successfully got inside.

A homeowner was killed during the incident in the 900 block of North Monaco. A neighbor had reported that the homeowner was being assaulted by three men.

On Tuesday afternoon, the Denver Office of the Medical Examiner identified the homeowner who was killed as 64-year-old Mark Outman. A female relative of Outman was wounded in the shooting and remained in critical condition this week.

When officers arrived, one suspect fled on foot and two others fled in a 2009 black Honda Fit, Clark said. The suspect who fled on foot was arrested nearby with a handgun in his possession, according to Denver police Lt. Matt Clark.

A second suspect who got out of the Honda at some point during the pursuit was spotted by officers as he ran down a nearby street with a handgun, according to Clark, who said the suspect allegedly pointed a gun at a driver on the street, prompting officers to fire upon him.

It is unclear whether the suspect was hit at this time, but he ran across a median and threw away the handgun as he continued to run, according to Clark. He then tried to carjack another vehicle unsuccessfully before continuing on foot in the area.

Another officer started following him, according to Clark, before the suspect stopped two more vehicles on Monaco. He got inside through the passenger-side door of the vehicle, which had a woman inside at the time, Clark said. Moments later, the officer fired several rounds into the passenger-side window, hitting the suspect, who later died at Denver Health Medical Center.

The Denver Office of the Medical Examiner on Tuesday afternoon identified the man shot and killed by police as 47-year-old Larry Hamm and said his cause of death was gunshot wounds.

Clark said that investigators have so far not recovered another weapon from that vehicle, signaling that the suspect shot and killed was not armed at the time. He said there was so far no indication any of the suspects fired at officers.

A bullet from one of the officer’s guns struck a bystander’s vehicle during the exchanges, but the round did not enter the passenger compartment, Clark said.

While the pursuits were ongoing, officers discovered Outman and his family member shot inside the home. Both were taken to the hospital but Outman was pronounced dead.

Clark said that in addition to the two handguns recovered from the two suspects, a rifle was found outside Outman’s home. He added that investigators believe the suspects are connected to residential burglaries that have been occurring recently in the area.

No officers were injured in any of the incidents, and the woman who was carjacked suffered some glass shrapnel injuries, Clark said.

In total, three officers fired seven rounds during the ordeal, none of whom had been involved in prior police shootings, Clark said.