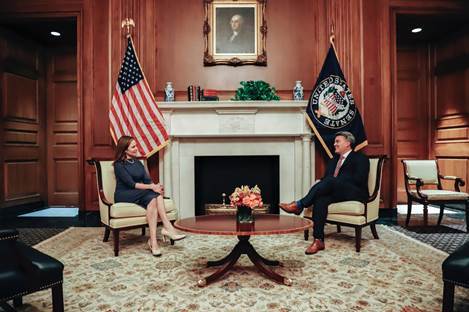 “I am confident that Judge Barrett is a highly qualified jurist who has thought deeply about the Constitution, the role of precedent in judicial interpretation, and the importance of judges following the law as written rather than legislating from the bench,” Gardner said in a statement after the meeting.

In a statement from his office, Gardner said that he and Barrett “discussed the proper role of the Judiciary, her record as a federal appellate judge, and her extensive academic work.”

Gardner said in a statement last week, before Barrett was announced as the pick, that he would vote to confirm a “qualified nominee” at any time – something he called Barrett on Tuesday.

Gardner was among several Republican senators who met with the 7th Circuit Court of Appeals judge on Tuesday. Gardner previously voted to confirm her to the 7th Circuit in 2017.

Gardner and other senators up for re-election this year have faced scrutiny over their flip-flops from their positions in 2016, when Senate Republicans, including Gardner, blocked hearings and a vote for President Obama’s March 2016 nominee, Merrick Garland, saying at the time that voters should decide the pick in an election year. Justice Antonin Scalia had died in February of that year. Gardner faces Democratic former Gov. John Hickenlooper in the General Election.

“That is why the next president of the United States should have the opportunity to fill the vacancy on the Supreme Court. In 1992, even then-Senator Joe Biden stated the Senate should not hold confirmation hearings for a Supreme Court nominee until after that year’s presidential election,” Gardner said in a statement at the time. “Our next election is too soon and the stakes are too high; the American people deserve a role in this process as the next Supreme Court Justice will influence the direction of this country for years to come.”

Democrats in 2016 were incensed by Republicans’ actions and said that if a president nominates a potential justice, it is the Senate’s duty to advise and consent. This year, Democrats, including Sen. Michael Bennet, D-Denver, have said that it is too close to the election and that the vicinity to this year’s election is vastly different from when Garland was nominated in March 2016.

Bennet said in an interview last Thursday that the difference lay in the timing: Antonin Scalia died in February 2016 and Garland was nominated that March, and Trump’s nominee was announced Saturday, 38 days before the election.

He also reiterated what his office said the day Justice Ruth Bader Ginsburg’s death was announced – that he felt that a justice should not be put forth until after Inauguration Day no matter who wins the presidential election.

The Senate did vote unanimously last Thursday to pass a resolution that reaffirms the Senate’s commitment to an “orderly and peaceful transfer of power” the U.S. Constitution already calls for.

Bennet acknowledged in the interview that while Democrats taking back the White House was the top objective for his party this upcoming election, the even more difficult piece for Democrats this November would be taking back the Senate from McConnell and the Republicans in order to affect any change.

“We have to win not just the presidency, but the majority in the Senate. Mitch McConnell has made very clear as the Majority Leader that he doesn’t have the interests of the American people at heart,” Bennet said. “…I think he’s done enough damage, and I think it’s time for him to turn the keys over to somebody else who can actually work for the American people – no matter, by the way, what party they’re in.”

Bennet voted against confirming Barrett to the 7th Circuit, but she was confirmed in a 54-42 vote, with four senators not voting.

Senate Judiciary Committee Chairman Lindsey Graham, R-S.C., said Sunday that Barrett’s confirmation process would start Oct. 12 and work to move her out of the committee on Oct. 22.

The remaining timeline would be up to Senate Majority Leader Mitch McConnell, R-Ky., with the expectation that Barrett would be confirmed prior to Election Day, as enough Republican senators committed to voting for Trump’s nominee to confirm that person before Barrett was announced as the pick on Saturday.