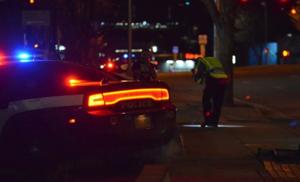 Police were called just before 11 p.m. about a possible drive-by shooting at the Babilonia nightclub off the 2500 block of East Platte Avenue near Pitkin Street, but officers later learned the suspect had been in the club just before opening fire, according to Gazette news partner KKTV.

“For an unknown reason, the suspect, after leaving the club, fired multiple times at the building while driving away on Platte Avenue. Two people sitting inside the business were struck by the gunfire,” police said.

The two victims drove themselves to a nearby hospital. Their injuries were non-life-threatening, police said.

The shooting suspect has not been located as of Sunday morning. Anyone with information is asked to call Colorado Springs police at 719-444-7000 or Crime Stoppers at 719-634-STOP.