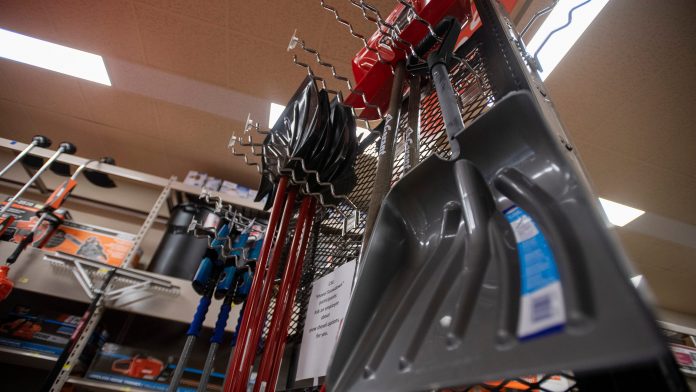 Reading this story without a subscription? Get a year of access to Coloradoan.com for $39 now through March 18 by clicking here to subscribe. We appreciate your support of local journalism.

The Home Depot on Fort Collins’ John F. Kennedy Parkway was down to its last snow blower by 9 a.m. Wednesday.

Josephs’ Hardware store in west Fort Collins stocked up on extra pallets of firewood and was expecting another truckload of snow shovels Thursday morning as city residents prepared to hunker down for what could one of the worst snowstorms in Fort Collins history.

“We’ve had to switch the type of shovel we ordered,” said Josephs’ owner Matt Chavez.

It’s not expected to be a storm where you can push the snow off the sidewalk or driveway. “It’s a shovel-and-lift-and-throw storm,” he said.

“We went with a scoop and bent handle shovel so it’s more ergonomically correct” and a little easier on the back, Chavez said.

Business started picking up midday Tuesday as “people started to get wind that something unusual was coming,” Chavez said. “I expect we’ll be even busier (Thursday) morning. It’s unclear when snow will really start to fall.”

Dean Davis bought a second snow shovel Wednesday afternoon and a bag of turf builder. The shovel, he said, “is for my wife.” He anticipates clearing his driveway and sidewalks could be a two-person, two-shovel job.

The turf builder will go on the lawn now, he said, and when the snow melts it will carry the fertilizer into the soil.

“We can use the moisture,” he said. “It will be a nice winter wonderland out there.”

New to the area?:Check out this guide on how to weather a Colorado spring snowstorm

Davis personified what most Coloradans know is par for the course in March: warm springlike days followed by snow. He was wearing shorts on his trip to Josephs’ but bracing for the winter weather ahead.

How much we get and when it starts depends on which models come to pass.

Most models have snow beginning in Fort Collins Friday evening through Sunday with 1 to 3 feet expected.

Customers aren’t just preparing for heavy, wet snow, they’re bracing for power outages that could result in using their fireplaces for heat.

Chavez stocks firewood in 12-piece bundles. “We’ve been selling five, 10 bundles at a time,” he said. Enough wood to last a couple days.

At Home Depot on JFK Parkway, manager Linda McElmeel said people were stocking up Wednesday and Thursday. “We’re not seeing longer lines, but we can see that people are specifically shopping for the weather,” buying more shovels and snowblowers.

By Wednesday afternoon cars were lined up at the Timnath Costco’s gas station, waiting to fill up before the snow flew.

At King Soopers on North College Avenue, John Gerthe was getting the basics but nothing out of the ordinary. “We just came early,” he said. He lives in rural Fort Collins east of the Budweiser plant and worried he wouldn’t be able to come on his normal shopping day later in the week.

Deb Dinkel and Richie Selway loaded a couple cases of water in their trunk at Safeway at Drake and Taft Hill roads Wednesday afternoon. But it wasn’t because of the impending storm. “We’ve already got everything we need,” Dinkel said. “We don’t live far away so we can always tromp through the snow if we need anything.”