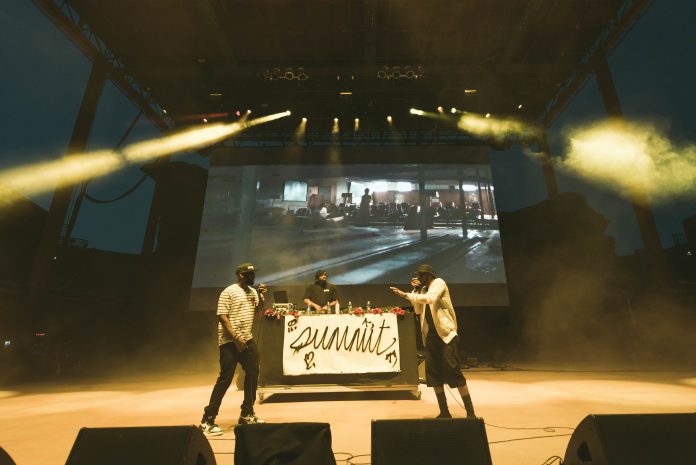 A hip hop event of legendary proportion is about to land in Denver next week. The event, hosted at Denver’s Mission Ballroom, boasts local favorite The Reminders, Rhymesayers Entertainment’s Brother Ali and Evidence, Black Star (Talib Kweli and Yasiin Bey) and DJ Premier. Originally, the line up did not include Brother Ali and Evidence, but the two were greatly welcomed upon attaching to the roster. In addition, a few special guests are set to join, so the night is endless with possibility.

This show comes at a pivotal moment for the acts involved, as nearly all of them have recently dropped fresh projects. The Reminders released their latest, Unstoppable, in August, Brother Ali put out the Evidence produced Secrets and Escapes (which features Kweli) at the beginning of the month and Black Star recently confirmed their massively anticipated (Madlib produced) follow up album to 1998’s Mos Def and Talib Kweli are Black Star. Lastly, after over nine year’s since Guru’s passing, DJ Premier gifted the world with Gang Starr’s One of the Best Yet, featuring his beats under posthumous recordings of Guru on November 1. One of the Best Yet also features Kweli, and Premier has created past beats for Bey, so at least a few rare live performances of beloved tracks are forecasted to make the setlist.

The Reminders are known in the Denver and Colorado Springs community for their dedication to the music scene and contribution to community outreach. In addition to their three albums, the husband/wife duo Big Samir and Aja Black are also engaged with local organizations and regularly speak at schools and workshops, calling on progressive improvement. Fans will be highly rewarded for catching their opening set at the show.

Brother Ali and Evidence are both part of the hip hop empire that is Rhymesayers Entertainment out of Minneapolis, Minnesota. Over the years, the two have carved themselves into the rap scene by their own right, and their latest album together is a perfect way to fuse each of their expertise. The duo was initially slated to headline their own concert on the same night at Cervantes’, but how could fans choose between two rap shows in one night? The addition of Ali and Evidence solidified the event at Mission Ballroom as a necessity for all Denver rap fans.

Few albums have ever stirred up a music scene and influenced entire careers quite like Black Star’s Mos Def & Talib Kweli Are Black Star. The duo pushed the boundaries of rap music at the time, using complex lyricism and simple beats to challenge their listeners to a new level. Both Kweli and Bey (formerly Mos Def) have extensive careers in their own right, but when they hop on stage together, they are unlike any other act today. The set is sure to include surprises as well as the addition of DJ Premier. The show is marketed as “Talib Kweli, Yasiin Bey and DJ Premier are Black Star Gang,” so as to state that DJ Premier will assist in the tables behind the emcees.

DJ Premier is one half of one of the greatest rap duos of all time, Gang Starr. Since their beginning in 1989, Gang Starr was heavily influential in rap music until their break up in 2003. Guru, the emcee, passed away in 2010, preventing the possibility of a reunion. Since then, fans never thought they would hear the two on record ever again. However, on the first of the month, Premier dropped One of the Best Yet, complete with posthumous recordings of Guru. Simply the live performance of Premier and these newly released tracks are monumental for any hip hop head, adding in the others is just further reason to get there early and rage in the front.

The event will take place at Mission Ballroom on November 23, 2019, at 8:30 PM. Get there early to secure a spot to see all of these amazing acts, and buy tickets for the event here.