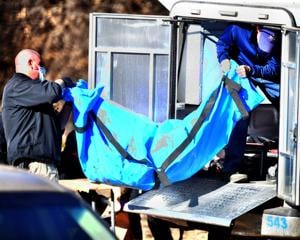 The remains were of a single skeleton, the El Paso County Coroner’s Office said Tuesday night. The bones will be further examined Wednesday before investigators begin attempting to identify the person.

Technicians with the Colorado Bureau of Investigation joined county coroner investigators at the park for excavation that continued most of the day Tuesday. County Coroner Dr. Leon Kelly described the removal as a “delicate process,” that “takes some time, especially if the ground is frozen.”

Investigators could be seen removing buckets of dirt from a heavily wooded area between the parking lot for the park and the Pikes Peak Greenway Trail. They then sifted the dirt for evidence.

Kerr said that with such discoveries, where there’s only “one chance” at taking apart the scene, the police department will utilize as many agencies as needed. She added that police are unsure yet if they even have a crime scene.