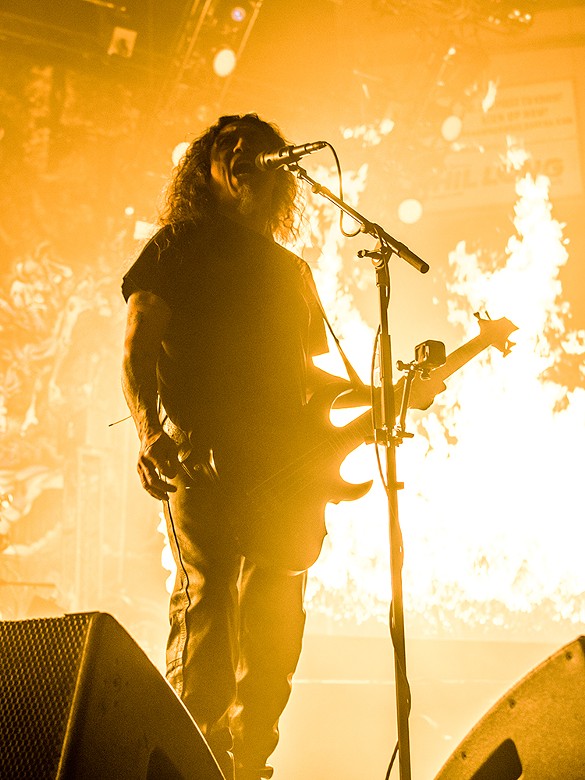 On Wednesday, Nov. 20, 2019, the mind-boggling became real: Slayer headlined the Broadmoor World Arena. No joke, the response when I say I saw Slayer at the World Arena has been largely incredulous, as if the town that hosts Focus on the Family and New Life Church would be hesitant to host the band that wrote tracks like “Disciple,” which has “God hates us all” as part of its hook. I can’t po$$ibly imagine the rea$on behind thi$ deci$ion, but I’m happy as hell about it. But it’s the final leg of Slayer’s farewell tour, dubbed “The Final Campaign,” and the lineup was stacked with headline-grade talent. Check out a slideshow of photos from the event below, and read more about what went down below the jump.
Opening the show, Philip H. Anselmo and the Illegals played a set of Pantera covers — Anselmo was vocalist for Pantera during their ‘90s heyday, and his band includes Flesh Hoarder guitarist Mike DeLeon, Superjoint drummer and guitarist José Manuel Gonzalez and Stephen Taylor on drums and guitars respectively, and former Cattle Decapitation bassist Derek Engemann. Anselmo has lept feet-first into controversy in the past through occasional drug- and drink-fueled racist comments on stage, most recently in 2016, though the jury’s still out on whether he’s a bigot who keeps his mouth shut when sober or just clears the low bar of “not as racist as Morrissey.” Either way, we wish him health in his sobriety.

After, industrial metal innovators Ministry played a set consisting entirely of classics — not a single track released after 1992. Al “Uncle Al” Jourgensen looked as lithe and deranged as ever in his signature dreadlocks-and-round-glasses outfit, belting out the bands ‘80s and early ‘90s hits. The tour marks the 30th anniversary of The Mind Is a Terrible Thing to Taste, but Jourgensen, who grew up in part in Breckenridge, Colorado, opened with some deeper cuts “The Missing” and “Deity.” Jourgensen’s live band included former Tool member Paul D’Amour on bass, former 3 Headed Snake members Sinhue “Sin” Quirin, Cesar Soto and Derek Abrams on guitars and drums, respectively, as well as former Prong member John Bechdel on keyboards. Between the flashing lights, the scrap-metal cross and the psychedelic-meets-Matrix video reels on the projector, they set a great vibe. Ministry finished their set with industrial speed metal classic “Jesus Built My Hotrod,” a wall of gibberish and riffs that plowed through the crowd with all the forbearance of an eighteen-wheeler with dead breaks, proving that this rock thing is true: Jerry Lee Lewis was the devil.

Looking at the bill, Primus were the clear outlier among thrash metal and thrash-influenced acts, sparking many a “seriously?” from myself, peers and colleagues. But after two sets of full metal guitar theatrics, the trio of bassist/vocalist Les Claypool, guitarist Larry Lalonde and drummer Tim Alexander served as the perfect palate cleanser. These iconic weirdos, Gen X’s freak-pride answer to prog legends Rush, mostly stuck to their stranger ‘90s hits as well, spotlighting Claypool’s bass-slappin’ licks and Alexander’s deceptively complex drum fills alongside Lalonde’s slow-burn guitar work. Claypool, now evolved into his true “quirky gnome uncle” form, shared plenty of energy in his wry lyrics, shuffle-stomping around the stage with abandon. The band slipped in a cover of “Cygnus-X” by the band’s heroes in Rush and finished with some heavier cuts from their early albums: “My Name is Mud” from ‘93’s Pork Soda and breakout hit “Jerry was a Race Car Driver” from ‘91’s Sailing the Seas of Cheese.

After Primus’ set, the halls of the World Arena filled with occasional mass-screams of “SLAYER!” as if the band were coming on stage, a reminder that the Bay Area thrash metal co-founders’ 38-year career has spawned loyalty and dedication paralleled by few. In metal, Slayer fans have earned a reputation for dedication and going off like lunatics, which they proved with wide, unceasing mosh pits and fervor in tribute to the band’s final tour.

As for the band themselves, remaining original members Tom Araya (bass/vocals) and Kerry King (guitars) performed in uncanny lock-step with guitarist Gary Holt and drummer Paul Bostaph, both of whom split time between Slayer and their band, fellow Bay Area thrash OGs Exodus. Araya may have wanted to retire since at least 2013 and has talked about selling his soul to Slayer, but he kept a strong performer’s smile on his face as he delivered snarling machine-gun vocals and thunderous bass licks.

The band’s stage setup was one of the simplest of the evening: no screens, no projectors. Just lights, smoke, backdrops celebrating the iconic (grim, bloody, blasphemous, bleak) album art created for the band by the late Larry Carroll, and fire. Lots of fire. Walls of fire, gouts of fire shot into the air, flame jets at front and back of stage, and even more flamethrowers forming an inverted cross during particularly blasphemous passages. It’s good to know that Slayer won’t drag their live career on into pitiful, shambling mockery of what they once were, that they’re going out with shows as laser-precise and mad as ever. If we had to complain, we’d wish the setlist had a few of the band’s slower tracks to break up the full-speed-ahead thrash attack. But this is Slayer doing everything they needed to do: fast, heavy, and always at maximum volume.