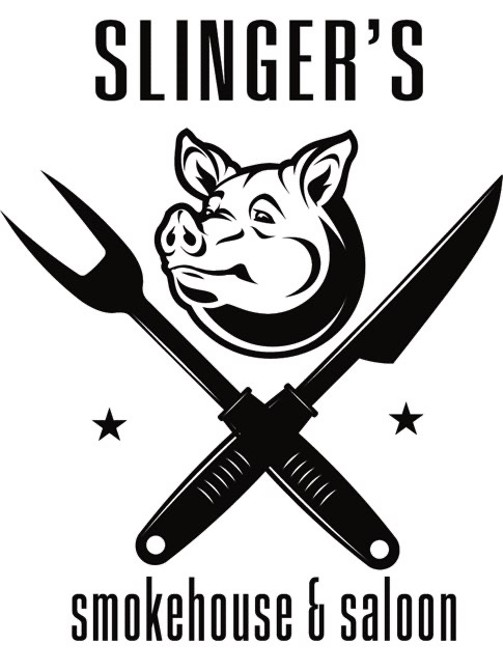 A ghost restaurant is a kitchen that serves delivery and take-out only, thereby keeping low overhead for economic viability. Howard cites recent data which indicates pickup and delivery as the #1 growing restaurant industry trend. “With this model coming out of big cities,” he says, “we looked at it and saw that we may not have the population [in this location] to support one restaurant, but it can support three of four different concepts out of one kitchen.”

So, Slingers is a sit-down bar and barbecue joint — “We’re all hospitality folks, so it’s hard for us to let that go,” he says — but it also sells 1) a vegan/vegetarian menu, 2) a Nashville hot chicken menu and 3) an Italian menu for pickup/takeout only (they’re partnering with third-party providers like Uber Eats, DoorDash and Grubhub).

As for the barbecue, Howard says DesRoches lent his recipe for apple- and oak-smoked meats, and that “smokehouse” is the key word to understand Slingers’ style. The team doesn’t prefer to get caught up in all the regional banter about all the barbecue styles out there, believing that if you say you are one thing, like Kansas City style, for example, then some purists will attack you for not being dead-on style, while other potential diners will perhaps avoid you, saying, ‘Oh, well I prefer Carolina- or Texas-style.’ Here, they’re just going for good barbecue all around.