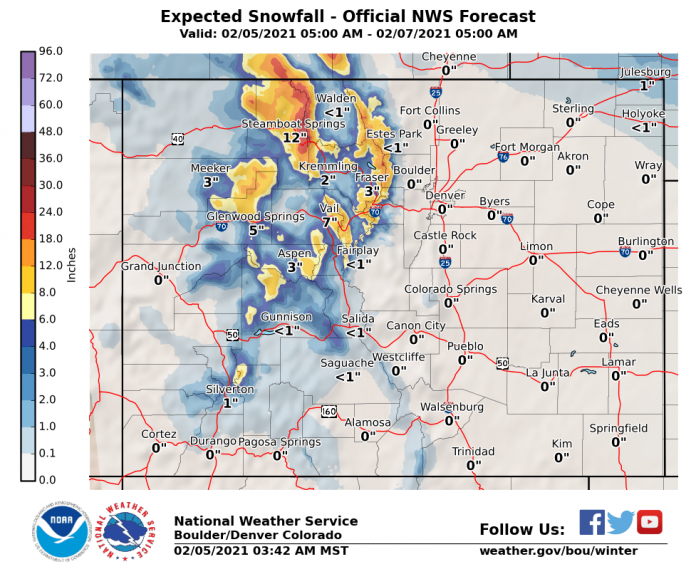 DENVER – Many mountain roads were snowpacked and icy late Friday afternoon as snow continued to fall in Colorado’s High Country.

The highest snow totals are expected in Jackson and Grand counties in northern Colorado, which are expected to see another 10 to 18 inches of new snow between noon Friday and early Saturday morning, along with winds gusting up to 50 miles per hour in the Rabbit Ears Pass area. A winter storm warning has been issued for the area.

Further south, winter weather advisories are in place for most of the central and northern mountains, which are likely to receive 4-10 more inches by Saturday morning than what was on the ground to start the day. Winds are also expected to gust up to 55 miles per hour, creating blizzard-like conditions at times, according to the National Weather Service.

Chain and traction laws were in effect for most mountain highways and I-70 as of late Friday afternoon, and there had been some spotty closures, including an hourlong closure of eastbound I-70 at Vail Pass earlier in the afternoon.

CDOT also reported a safety closure at around 7:40 p.m. for both sides of US 40 between Kemry Lane and Spruce Street and between Kremmling and Rabbit Ears Pass due to adverse conditions.

The National Weather Service said the peak of the snowfall would likely end by early evening, but that light and moderate snow would persist overnight. There is another chance of snow for the mountains on Saturday afternoon.

Several Colorado ski areas have received more than a foot of snow in recent days, and the additional snowfall and high winds continue to exacerbate dangerous avalanche conditions in the backcountry.

There are avalanche warnings in effect until Saturday morning for the moment, though they could be extended, for the Vail & Summit County as well as the Steamboat and Flat Tops zones. The Colorado Avalanche Information Center rated both of those zones, as well as the Gunnison, Aspen and Sawatch Range Zones, as having High (4 out of 5) avalanche danger on Friday, with slides likely and large enough to ill people. Travel is not recommended in the backcountry in those zones.

Four more people were killed in avalanches this week in Colorado – three in a slide Monday near Silverton and another man who died in an avalanche in the East Vail Chutes on Thursday.