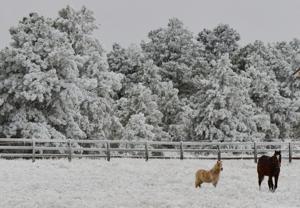 A brief snow storm that brought several inches of powder to northern El Paso County Saturday morning is expected to taper off overnight, meteorologists at the National Weather Service in Pueblo said.

The storm, caused by a system moving from the southwestern edge of the state, brought up to 3 inches near Black Forest, said Makoto Moore with the Weather Service. Areas near Monument and the Palmer Divide saw about 5 inches.

Strong northerly winds that developed from the storm brought gusts of up to 45 mph to northern El Paso County, Moore said. A winter storm warning was issued by the agency until 5 p.m. Saturday for northern parts of the county. It warned of slippery road conditions and patchy blowing snow that could significantly reduce visibility.

Southwestern Colorado saw upward of 15 inches Saturday in areas like Telluride and Rockwood, according to Weather Service data. The heaviest snow was expected near the Sangre de Cristo and Wet mountains and over parts of Teller County and Pikes Peak. By Sunday, snowfall is predicted to ebb over the Continental Divide.

Friday, meteorologists warned that up to 3 inches of snow could fall in Colorado Springs Saturday if the system stayed on course, but only about an inch of powder fell in the city.

Colorado is notoriously difficult to forecast with mountain ranges that create flaky readings. If a storm system moves even 50 miles in any direction, it can make a big difference in where snow ends up falling, Moore said.

Sunday, skies in Colorado Springs should be mostly clear, the Weather Service’s forecast said. Monday and Tuesday are expected to be sunny with temperatures dropping to around 10 degrees. Wednesday night there’s a 30% chance the city will see its next snowfall.