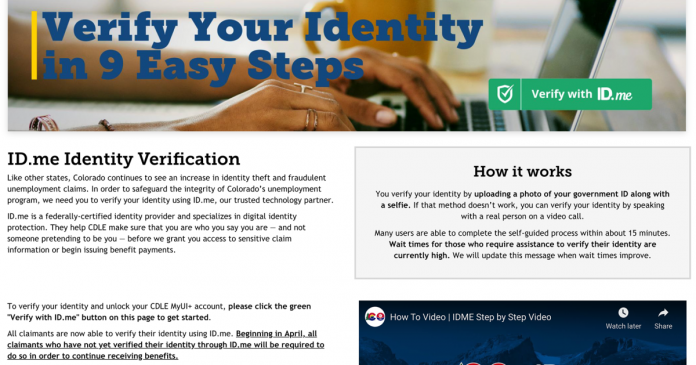 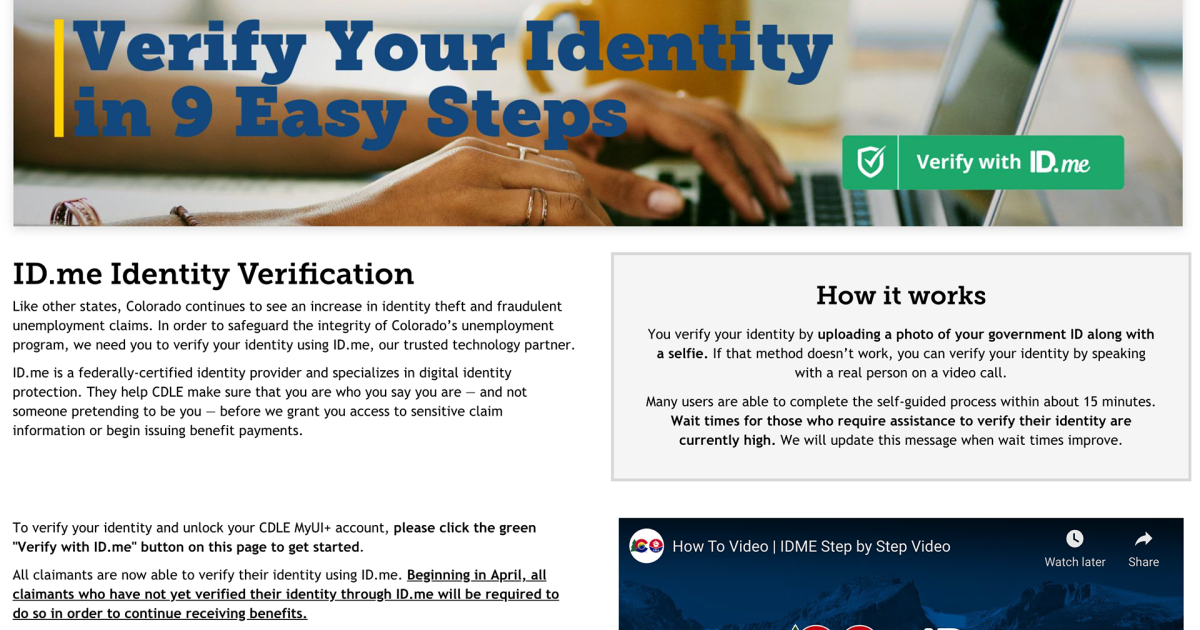 DENVER – Some Coloradans who have to go through the ID.me identity verification process this week in order to continue receiving their unemployment benefits are seeing long wait times with the company’s virtual agent if they do not correctly complete the process the first time.

The Colorado Department of Labor said Thursday it had emailed about 68,000 people this week to notify them they would need to verify their identities through ID.me, as the department is now requiring everyone receiving unemployment benefits to do so.

Pandemic Unemployment Assistance recipients were required to go through the process earlier this year after the state started working with the company to combat massive fraud within unemployment systems across the country and in Colorado. Along with ID.me, the CDLE has now implemented 58 fraud triggers as part of the MyUI+ system.

Normally, the process takes about 15 minutes to complete in order to get verified, according to CDLE. But department officials cautioned Thursday that about 15% of people going through the self-guided process with ID.me had their attempts to verify rejected and needed to go through ID.me’s “trusted referee” video chat process.

The officials said that one of the main things that were leading to rejections was people either not filling out the form correctly or not providing a clear and well-lit selfie required for verification.

CDLE Acting Unemployment Insurance Division Director Phil Spesshardt also said people who will not have to go through the ID.me process include those already verified with the company, or people who have previously reported a fraudulent claim that has been closed.

ID.me CEO and co-founder Blake Hall said Friday the company is working with 22 states, including Colorado, to fight unemployment fraud. He said the recent spike in wait times – which he said averaged about three hours as of Friday afternoon – are due to several states, including Colorado, Nevada, Florida and California, “sending months to a full year’s worth of claimants through ID.me at once to combat fraud within existing claims pools.”

“ID.me is perfectly capable of handling new claims volumes in tens of states; however, when states run hundreds of thousands to millions of claimants through our system all at once to verify accumulated claims, then wait times increase,” Hall said in a statement.

“A majority of claimants will not need to go through the video chat process,” Hall added. “Nearly 90% of applicants pass ID.me via automated means in just a few minutes using a computer, phone, and a few pieces of documentation that most people would carry in their wallet. Those who are unable to use the automated process – or those who have come with the wrong documents or copies of documents rather than originals – are directed to the video chat process.”

Charles Kirmuss and his wife have been unemployed for more than a year and relying on Colorado’s unemployment system to pay their bills until they can find work.

During that time, they’ve dealt with numerous issues, like delayed payments, missing payments, website upgrades and more. Then, this week, his wife was one of the 68,000 Coloradans sent an email saying she needed to verify her identity with ID.me.

She started the process but then was flagged as needing to talk to an employee. So, she joined the queue of people waiting for online assistance.

“A message popped up that the wait time to speak to someone will be in excess of five hours,” Kirimuss said. “They changed that message about 2 1/2 hours into the process where now it’s just a little wheel spinning with no estimated time.”

He also started to go through the ID.me process but experienced issues, so he sent the company an email and received a case number.

“It’s been quite frustrating and there’s no way to talk to anyone,” Kirmuss said.

Going through all of the hurdles in order to receive unemployment has become somewhat of a fulltime job, Kirmuss says.

“You’re someone who’s at home, instead of looking for a job on the various portals, now waiting for a screen to pop up just to get documents verified,” he said.

After about seven hours of waiting on Friday, Kirmuss said his wife was able to get through the process and be verified.

Hall, the ID.me CEO, said that in December and January, Arizona and California sent hundreds of thousands of claimants through the process and that video chat wait times were back down to the company’s target of 30 minutes to 2 hours “within a couple weeks.”

Hall said that the company is seeing about a 50% fraud rate among backlogged claims trying to be verified through ID.me, which is also causing increased wait times. And the company is also combatting attempted hacks from Russia, Uzbekistan and Nigeria, Hall said.

He said the company was hiring video chat staff at a clip of 40-50 employees per week to work through “truly unprecedented” unemployment fraud and identity verifications.

Still, Kirmuss says he’s disappointed because a two-week delay can make all the difference for families who need the money now.

“How can a company that’s being paid, I’m sure, by the state not understand that they are going to be flooded and to be prepared for this?” he asked. “It’s totally unacceptable.”

The CDLE said that people can call 303-536-5615 if they do not have the technology to complete the process online and request help. Click here for ID.me’s user guide for the Colorado unemployment system, and click here for more from the CDLE.