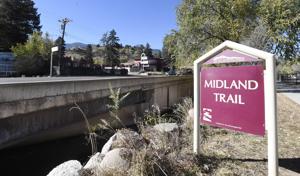 Animal law enforcement warned residents in a Colorado Springs neighborhood Friday that their dogs could be in danger of being poisoned after suspicious meat was found along an Old Colorado City trail last week.

Vicki Feaz with El Paso County Animal Law Enforcement said that the suspicious meat was first found on Dec. 13, when a woman hiking the Midland Trail said she found “balled-up meat” that “appeared to be tainted.” The meat had an odd smell, Feaz said, and had the appearance of uncooked bacon.

Officers later found at least a pound of similar meat spread out across the trail, Feaz said. Authorities believe the meat, which won’t be officially tested until there is a suspect, is beef or pork, and that it could be laced with rat poison.

Animal law enforcement officers handed out about 40 fliers in the nearby neighborhood and veterinary clinics Friday warning residents of the meat. The fliers encouraged pet owners to call a veterinarian immediately if their dog displayed symptoms of poisoning including: lethargy, vomiting, diarrhea and loss of balance.

Meat tainted with rat poison has a blue or white crystallized look, Feaz said. If it’s laced with anti-freeze, the meat will have a sweet smell and won’t harden in the freezer.

Regardless of the chemical the meat could be laced with, Feaz said an offender could face animal cruelty charges, which range from misdemeanors to felonies in Colorado. Even at a misdemeanor level, offenders can see up to 18 months of jail time.

In July, a 73-year-old Colorado Springs woman pleaded guilty to animal cruelty after she unsuccessfully tried to poison her neighbor’s dog. At a hearing, a judge also ordered her to donate $250 to the Humane Society of the Pikes Peak Region.

Anyone with information regarding the meat was encouraged to call El Paso County Animal Law Enforcement at 719-473-1741.