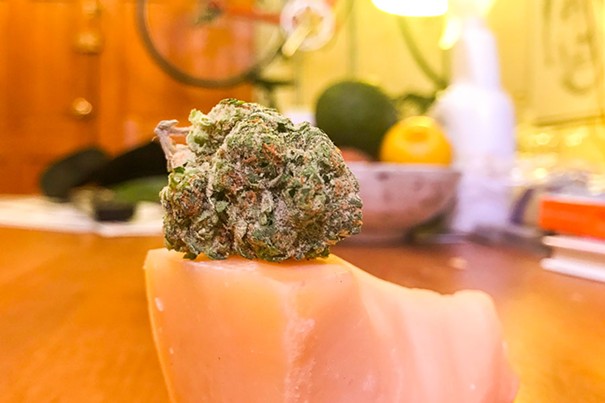 A mix of Cheese and Sour Diesel, Sour Cheese is a 60 percent Sativa, 40 percent Indica hybrid and, well, it feels like that and not much more. Which is to say, you’re in for a break-even sort of high: You’ll get sleepy but won’t be able to go to sleep, and its calming effects will leak through your body, like you’re being poisoned by Zen-like chill, making existing easier, though hardly enhanced.

It’s so much of a social weed that I lost track of what it was doing when I went out after smoking some to see a very intimate noise show. A show like that? Its context can be a bit anxiety-inducing, like, 20 dude-ers who look like me sitting or standing and allowing glacial guitars to build, build, build and never crescendo for 45 minutes all like, yesssssss — it is both nearly spiritual and completely ridiculous.

Smoking Sour Cheese reduced that anxiety and let me enjoy the show and ignore its trappings (and the trappings-within-trappings that get me thinking too much). At the same time, you want weed to enhance music a little — especially formless, cacophonous improvisation — and enable your ears to better peel back the six to 10 sounds screeching, squiggling and squonking, and Sour Cheese did not do that at all.

For such a sensory-averse high, Sour Cheese is visceral in all the ways that only matter when they’re bad. The color is nearly neon — like a light green highlighter — and in your grinder it looks like shredded Brussels sprouts (or “Brussel sprouts” as most of us have been calling them our whole lives), which is a useful way of understanding this strain’s ultimately limited appeal: Like Brussels sprouts, it is an acquired taste, contingent upon a lot of context and how it is prepared. I mean, the smell is bad — burnt, like when you were a kid and you vigorously erased something with one of those big pink erasers and you could inhale the friction.

The other smell here is a touch of Parmesan (the way good cheese smells bad) and then when you’re smoking, like you set an eraser on fire, just a gnarly whiff you don’t want near your nose. It’s all the more confusing because hidden inside Sour Cheese’s smell is Sour Diesel’s incredibly familiar one, so here you get a kind of twisted, contorted — soured! — version of something that veteran smokers know on a nearly Proustian level.

The smell lingers even as its high is long gone. When I got home from the show, Sour Cheese was still there in my apartment, its cacophony of gross holding on. And what was left of its stench about four hours after smoking was, sorry dear readers — diarrhea — like someone really going through it had used my bathroom hours earlier. Acidic, awful, and weirdly intimate. I was grossed out. I smoked more and then I didn’t mind. It’s hard to care much about — or for — this strain.

Freaking out when a crazy person approaches you: 2