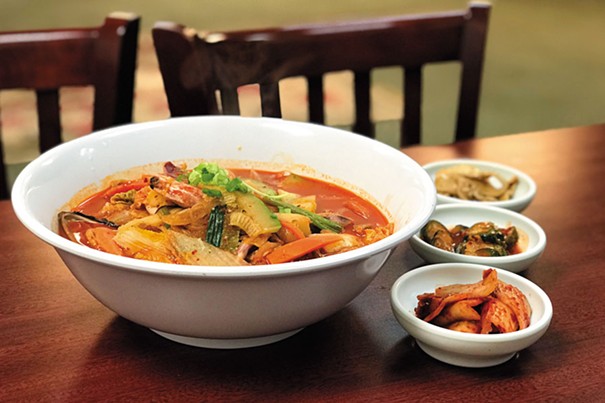 In a location that’s been many Korean eateries over many years, Kang Nam took over eight months ago, says our server, a notably gracious host who gives slight bows between visits. Some charming kids poke their faces out from the kitchen entryway, lending a family vibe to the atmosphere.

Kang Nam’s another phonetic spelling of Gangnam, the district in Seoul made immortal by the horrific song. With Seoul street markets in mind, I introduce my dining mate to a kimchi pancake appetizer, though this isn’t the best ambassador I’ve tasted locally, as it’s unevenly cooked, charred on one edge and a bit too gooey toward another. Still, the flavor’s spot-on, with pork pieces enhancing the tangy richness, and she’s hooked.

We also slurp through an enormous bowl (fair at $15) of champong soup, a spicy Korean seafood noodle soup, deep crimson and packed with head-on prawns, briny green-lip mussels, fairly tough squid hunks, and some cabbage and other veggies. Our server shares history on the soup, influenced by the Chinese, and recommends we return to try an off-menu black bean soup. I’m enticed.