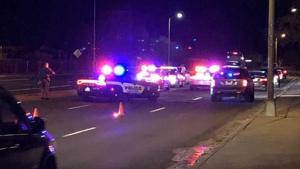 Troopers attempted to initiate a traffic stop at 9:38 p.m. at Austin Bluffs Parkway and North Academy Boulevard when the suspect fled. The one-mile-long chase ended by a trooper that executed a maneuver to make the suspect vehicle crash on North Academy.

A man and woman were detained at the scene, but it isn’t clear what charges they might face.

Officers with Colorado Springs Police Department assisted in directing traffic at the scene of the crash. No injuries were reported.