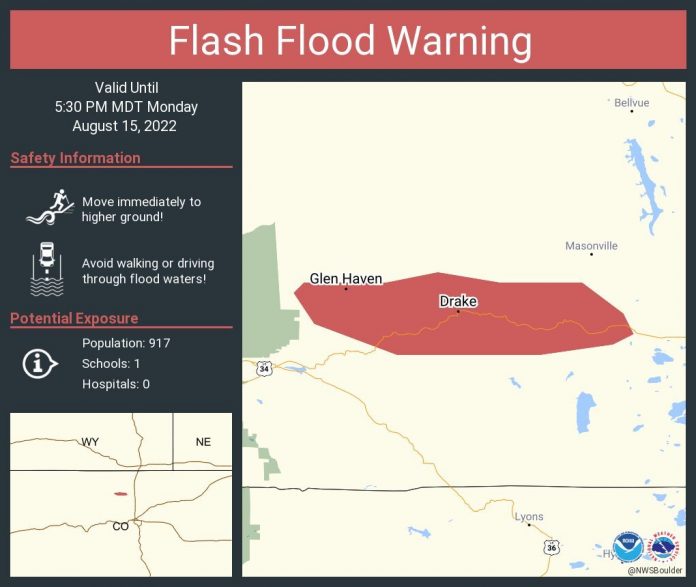 Scattered and slow-moving storms will increase the risk of flash floods for parts of Colorado beginning Monday afternoon through the late-night hours.

The morning’s sunshine and temperatures in the 80s will give way to scattered and slow-moving storms sometime between 1:30 and 3:30 p.m., according to local meteorologists.

Denver7 will update this blog with the latest on this storm’s movements.

4 p.m. | FLASH FLOOD WARNING | A flash flood warning has been issued for part of El Paso County west of Peyton until 7 p.m.

3:52 p.m. | LONE TREE UPDATE | The City of Lone Tree says street flooding is occurring around the city, including Park Meadows Drive between Yosemite and Acres Garden. A severe thunderstorm warning is in effect here until 6:15 p.m. Winds may reach 60 mph with one-inch hail.

3:37 p.m. | IMPACTS IN PARKER | Parker police say 60 mph winds and quarter-sized hail has been reported in the town. Residents may see damage to roofs, cars, house sidings and trees.

3:16 p.m. | FLASH FLOOD WARNING | The NWS has issued a flash flood warning for part of Douglas County, including Castle Pines, Lone Tree, Louviers and Sedalia until 6:15 p.m. This warning impacts about 163,000 people.

The NWS said rainfall rates in Douglas County are 1-2 inches in 15 minutes.

3:12 p.m. | FLASH FLOOD WARNING | A flash flood warning will continue for the area around De Beque on the western slope until 4 p.m., according to the NWS.

The Larimer County Sheriff’s Office said it has not received any reports of injuries or damage as of now. Water is over the road on County Road 43.

2:42 p.m. | ROAD CLOSURE | Highway 34 westbound is now closed at mile point 85 just west of Loveland due to “safety concerns” amid storms. The closure is between County Road 27 and County Road 29. In addition, Highway 34 eastbound is closed between Dy Gulch Road and Forest Service Road 4031.

2:15 p.m. | FLASH FLOOD WARNING | The Larimer County Sheriff’s Office has issued a flash flood warning for the Glen Haven, Drake and Cedar Cove area due to a storm cell that has produced “periodic surges of water” around the community. Residents may need to leave or climb to a higher location if conditions worse, the sheriff’s office said. The NWS said Drake is seeing rainfall rates of about 2.5 inches per hour.

This flash flood warning is in effect until 5:30 p.m. Monday and includes The Retreat, Miller Fork, and Black Creek. It also includes Highway 24 between Estes Park and Loveland.

Watch the hail come down in Black Hawk, Colorado

1:45 p.m. | RED CROSS READY | The American Red Cross of Colorado and Wyoming said it is monitoring the flood threats today and has volunteers ready to help if its government partners request it.

At the maximum, one-hour rain rates may reach 2.5 inches and three-hour rain rates may reach close to 3.5 inches in some spots. Flooding is possible in urban locations, including low-lying areas, roads, gulches and small streams. In higher terrain, mudflows and debris slides are likely, according to the Colorado Water Conservation Board’s Colorado Flood Threat Bulletin released Monday.
Colorado’s burn scars may be impacted by these heavy rains.