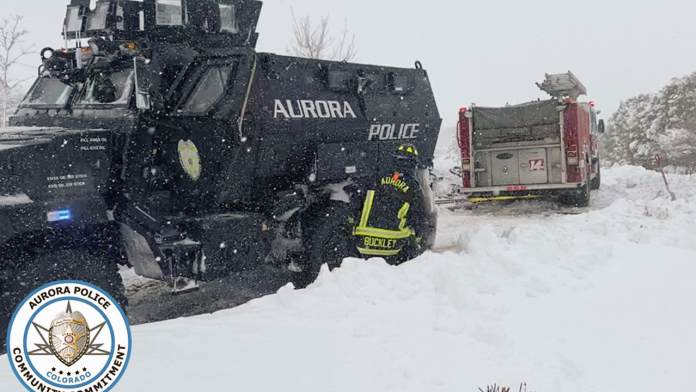 DENVER — It may look like a scene from a movie in some areas of the state come Monday morning. Abandoned vehicles and even snowplows litter highways and streets up and down the Front Range.

The snowstorm that hit Colorado this weekend is dumping more than a foot of snow and causing blizzard conditions in many places, making travel almost impossible. Authorities urged drivers to stay home, but some didn’t heed the warning.

Several drivers in Aurora had to be rescued. Police SWAT members rescued several stranded motorists on city roadways and on E-470, which is littered with at least 25-30 stranded vehicles, police said.

Aurora officers also rescued motorists in the area of Quincy and Gun Club Road. Cars were being left in the roadway.

Police later tweeted that they are responding to high volume of calls from people who are stranded in their vehicles. Police said they will only respond to calls where people are unable to find shelter in their immediate area.

Sunday evening, APD said there were at least 48 stranded or stuck motorist calls pending in the city. The majority of the calls were in northeast and southeast Aurora. Police said road conditions were so poor, that even some first responders were waiting for assistance.

By Sunday evening, the department said they were still responding to numerous calls, and their efforts may go well into the late night.

It was the same story in Douglas County. Authorities tweeted they were “responding to a bunch of stranded people in their cars throughout the county. Please, please stay home. One of our deputies and a CDOT plow driver even had problems.”

In Denver, cars heading to Denver International Airport were left abandoned on Pena Boulevard after the highway became impassable — leaving the A-Line as the only mode of transportation to the airport.

But many people were not in a rush to get to DIA. Overwhelmed with more than 20 inches of snowfall, the storm essentially shut down operations at the airport. Airlines have not made a determination on scheduling for Monday and cancellations are expected.