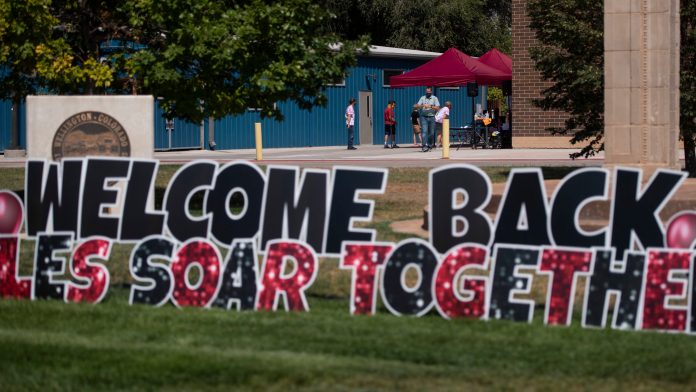 Editor’s note: This story was originally published by Chalkbeat, a nonprofit news organization covering public education. Sign up for their newsletters here: ckbe.at/newsletters

Young students are struggling to learn to read, and teachers are burning out as Colorado schools slog through the ninth month of the pandemic.

Those issues emerged as top concerns in a survey of 140 superintendents conducted by the nonprofit Colorado Education Initiative and the Colorado Department of Education. The needs assessment updates a similar survey conducted in the spring and reflects the challenges of educating students learning both in person and remotely while managing conflicting health and safety guidance and frequent quarantines.

The findings highlight the problems school districts need to solve this year — and the potentially long-lasting consequences of a year or more of disrupted learning. State education officials will use the findings to provide more targeted support to school districts, and legislators could use them to consider policy changes.

In the spring, superintendents rated the mental health of older students as their top student concern and better support for online instruction as their top concern for staff. In this survey, staffing shortages and teacher mental health loomed largest for district leaders.

Teachers this year are charged with enforcing new safety protocols, catching up students who fell behind in the spring, teaching students in their classrooms and students on the other side of a screen at the same time, and then pivoting to remote learning on short notice when a class has to quarantine.

“Our teachers and staff are stretched thin, and we can’t offer them any relief,” one superintendent in northwest Colorado wrote. “We don’t have enough subs, and I fear we will begin to lose teachers and other staff. The emotional stress our teachers and especially our leaders are under is vast, and I don’t know how long we can endure.”

Roughly 6% of Colorado teachers resigned rather than teach this year, and 2.5% took leaves of absence. The state doesn’t have good statistics to compare with previous years, as teacher turnover rates typically include educators who take jobs in other districts. Nonetheless, the loss of more than 2,600 teachers is being felt in a state that already struggled with shortages, especially in small rural districts where a higher percentage of teachers resigned.

In the northwest region, less than a third of districts reported having enough classroom teachers. Across the state, most districts don’t have enough substitute teachers, and many also report shortages of janitorial staff and bus drivers. Many substitutes are retired teachers who have health concerns about returning to the classroom, while others are the mothers of young children who can’t work if their kids aren’t in school.

State education officials have launched a social media campaign to recruit substitute teachers and are working with other state agencies to connect jobless people to positions in schools.

On the student side, superintendents are now most concerned about the loss of reading skills in kindergarten through third grade students, though concern for the mental health of middle and high school students follows close behind.

District leaders across Colorado ranked early elementary reading skills as a top priority, with the highest ratings — 65% — coming from rural districts. Many young students lost ground in reading when schools were entirely remote in the spring. Elementary students are more likely than older students to have had some in-person instruction this fall, but many young students also experienced disruption to their education and struggle the most to learn online.

Landon Mascareñaz, vice president for community partnership with the Colorado Education Initiative, said this is particularly concerning because reading is such a foundational skill, and children who don’t learn to read well by third grade tend to struggle throughout their school careers.

“Unless we really intervene here, there will be some significant long-term challenges,” he said.

Mascareñaz doesn’t want to use the term “retention” or talk about “holding kids back” — this idea comes loaded with stigma — but we need to have difficult conversations about how to make up lost learning, he said.

The level of concern around reading loss “should provoke a state and probably national conversation about kids taking different amounts of time to get back on track,” he said. “We need to remove the stigma around that conversation.”

That could take many forms, he said, from summer school to after-school tutoring to competency-based models in which students only move on to the next topic when they can show they’ve mastered the previous ones.

“What does this mean for the system as a whole if we know those early reading skills are so critical and kids have these gaps?” she said. “How can we catch kids up?”

On a brighter note, the survey found that school districts have made major gains in providing students with devices and internet access — but the barriers for families who still don’t have access are significant, and districts are worried about ongoing costs.

The survey found that just 5% of students in districts surveyed in both the spring and fall, or roughly 22,000 students, still didn’t have a device, down from 14% in the spring. The largest number of students without a device are in the Denver metro area, though rural districts report larger percentages of students without devices. Half of districts said an international backlog on tablets and laptops was the main reason students are going without. More than a quarter said lack of money was the problem.

About 4% of students, or roughly 30,000, still didn’t have internet access, down from 8% in the spring. This survey was taken in mid-October, though. Some districts that had enough hot spots a month ago are scrambling again after switching entirely to remote learning as COVID cases rise.

And hot spots alone won’t solve the problem. Districts report that some students live in areas without cell service or an internet provider. Some families also struggle to afford even the discount options available on the market.

Colorado lawmakers included money for broadband in relief bills just passed in a special session, but the money is not expected to cover every district.

One superintendent in southwest Colorado described students with no devices due to back orders, and other families where multiple students are sharing a single device with “sketchy” internet.

“No relief is in sight, as it is already late October,” the superintendent wrote. “Due to many other financial cuts and continued cutting, the district has exhausted given funds, and has done all it can do.”