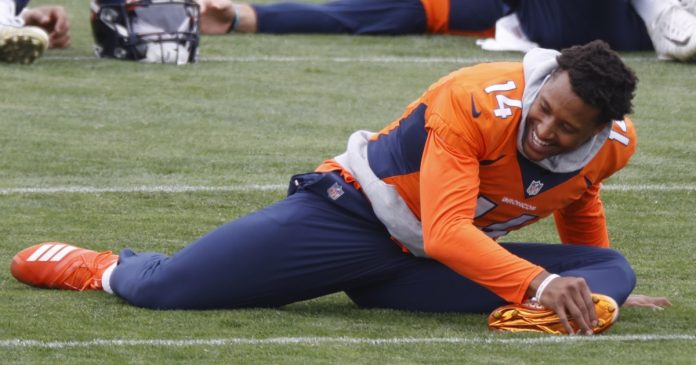 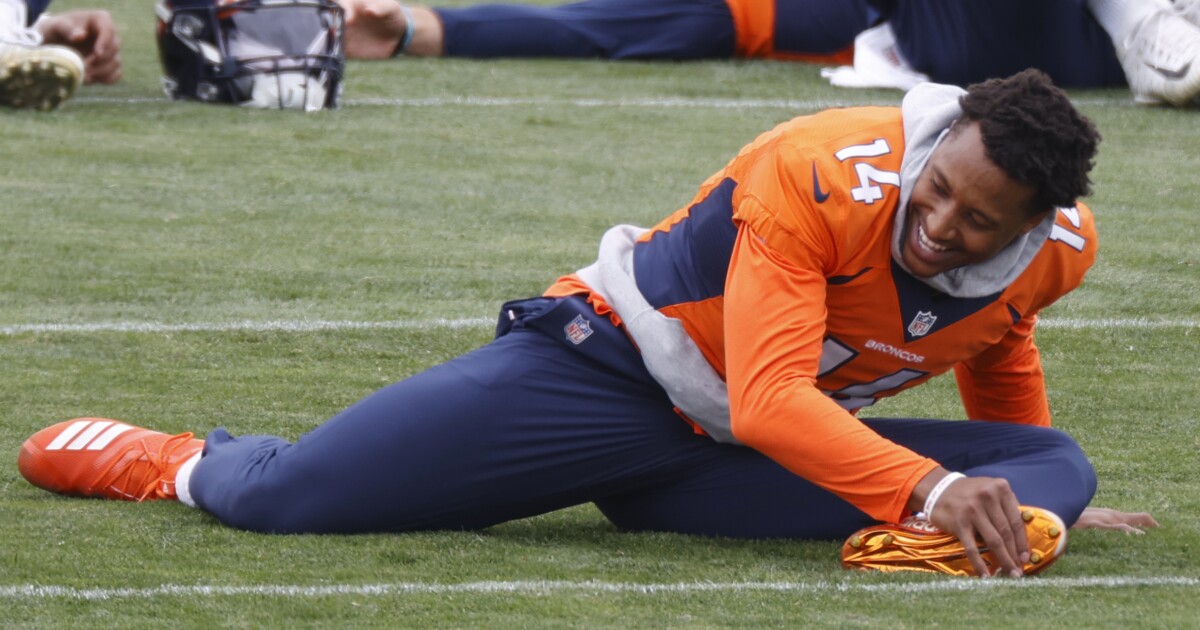 ENGLEWOOD — Courtland Sutton appeared on the practice field Saturday for the first time since spraining the AC joint in his right shoulder. He did not work out, but his presence represented progress in his recovery.

At one point, Sutton stood on the sideline talking with teammate Justin Simmons, and he pointed to his right shoulder and raised it in the air slightly. He remains a likely gametime decision Monday, but his movement is a positive sign.

So what must Sutton do to be cleared?

Sutton, who reached the Pro Bowl last season, hurt his shoulder making a leaping catch attempt Thursday, falling awkwardly on his right side.

“I appreciate everybody checking in on me. It’s all love and I know God got me always!” Sutton tweeted Friday.

The Broncos could use Sutton. They face a physical Titans team while breaking in new offensive coordinator Pat Shurmur with quarterback Drew Lock starting his first season opener.

While Sutton’s status remains uncertain, standout outside linebacker Bradley Chubb removed all doubt that he will play, recovering from a bout with tendinitis. He enjoyed a strong week of practice after resting his left knee for nine days. Chubb’s importance to the defense cannot be overstated after the potential season-ending ankle injury suffered by Von Miller on the last play of Tuesday’s practice.

“It will be challenging because I want to be out there for all the plays. If I am not out there 100 percent, I don’t want to selfish. As long as I am out there, you will get my best,” said Chubb, who has talked with Miller and wants to play well for him. “We didn’t talk about specific numbers (on a play count). It’s going to be how I feel. I am looking forward to it.”

Miller underwent successful surgery to repair a dislocated ankle tendon on Friday, but is out a minimum of three months, and possibly six.

Chubb remains well-versed in the road to recovery. He underwent his second ACL surgery last season, the first coming in high school. Chubb faced no limitations in training camp, but needed rest after experiencing discomfort at the Aug. 28 practice at Empower Field at Mile High.

“He’s in a good spot now. Our trainers have said they haven’t seen many players attack rehab the way he did,” Fangio said. “He had some potholes when he got back to practice (in training camp), but that was expected. He’s in a good place.”

Chubb told Denver7 that the subsequent rest represented the team showing an abundance of caution. His practice this week appeared to affirm this, though the former first-round pick will likely be used carefully in his first game since Sept. 29 of last season.

“I know there’s going to be a lot of adrenaline,” Chubb said. “I have to be able to control my emotions.”

Broncos search for OLB depth
A few days after making an offer to veteran Clay Matthews, the Broncos expressed interest in Cameron Wake this week. It amounted to an exploratory call, per a source. The Broncos will continue to look to add a veteran, but nothing is going on right now with Matthews. Other free agents available include Ziggy Ansah and Terrell Suggs.

Reminder, a veteran’s contract guarantees for the season is if he is on the opening day roster. As such, teams often wait until week two to add them, leaving it easier to move on if it doesn’t work out.

The Broncos brought in outside linebacker Isaiah Irving this week — he played two years for Fangio in Chicago — with designs on putting him on the practice squad. However, he has not been added to the roster as of Saturday afternoon’s practice.

Footnotes
Linebacker Mark Barron was ruled out with a hamstring injury, and it’s unlikely that rookie receiver K.J. Hamler (hamstring) will play. Tight end Albert Okwuegbunam (hip) has improved, but he might not be active on gameday. …

Kicker Brandon McManus on his four-year contract extension with $9.5 million guaranteed, “I am grateful. I told (general manager) John (Elway) that I want to help this team win and get back to another Super Bowl. … I would have felt comfortable going into the season without a contract. I was fine going into the season with that mindset. The last contract extension I signed the morning of the game. Obviously, things worked out for both sides.”