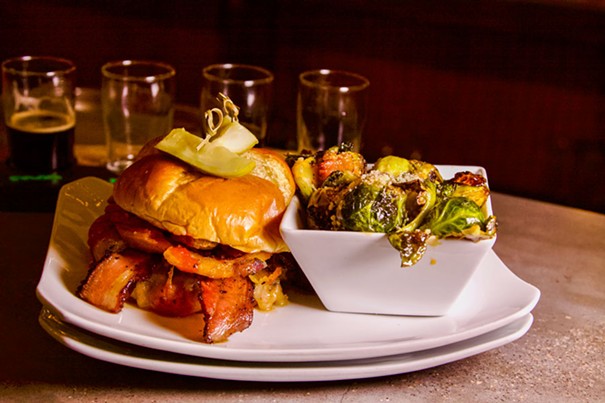 In the little over two years since its opening, Tap Traders has shifted focus a few times, such that today’s food menu (several kitchen managers later) has nothing to do with the original German fare. We’re told the Callicrate Beef burgers are bully though, and we don’t disagree after taking down the hulking whiskey BBQ burger, a fair $10 in today’s marketplace.

Whiskey barbecue sauce, onion rings, grilled mushrooms and bacon: all check. Pepper Jack cheese: check. … But, hang on a sec… make that ghost chile Pepper Jack, not printed on the menu but quickly detected by the smolder over my tongue. No complaints since I love heat, but some guests are in for a serious surprise. (You burned me, girl, but I still like you.) Side Brussels sprouts delight with big bacon flavor, nice char and not-too sweet sauce.