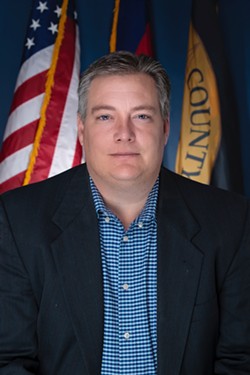 Teller County Sheriff Jason Mikesell told the Indy several times there’s no connection between his taxpayer funded office and his stable of side businesses, a topic explored in this week’s cover story you can find here.

But there is one thread of commonality that’s worth noting.

iXero LLC — Mikesell’s company that billed $3.5 million to a California school district for a security project — lists several companies on its website as “trusted partners.”

Two of those are MainNerve and Blue Light, both of which appear to be run by Bruce Parkman. Bruce Parkman made a $500 donation in March 2018 to Mikesell’s sheriff’s campaign.

Then, he benefitted from Mikesell’s contract with the Beverly Hills Unified School District. One invoice, dated June 5, 2019, and submitted to the district by Mikesell, showed a bill for $79,600 for “Blue Light Special Bundle Packaging-Enterprise Insight Analysis (EIA) – Commercial Pricing – (BL-BF-ELA-CMRCL).”

We attempted to reach Parkman through the Blue Light website but haven’t heard back. We also went to the address shown on Secretary of State business records for the company, but it’s accessible by keypad only and we didn’t spot a buzzer to ask to be admitted.

The history of Main Nerve is worth noting as well. It used to be called NEK Cyber Operations Group LLC and was run from 110 W. Sierra Madre Street.

NEK, if you recall, paid a state fine for setting off explosives without a permit in Teller County in 2012, which we reported on here. (This was at a time When Mikesell served as a Teller County deputy. He became sheriff in 2017 by appointment and was elected to his first term in November 2018.)

More recently, it gives an address of 2005 Aeroplaza. On his LinkedIn page, Parkman describes himself as CEO/founder of NEK Advanced Securities Group, Inc., from 2010 to 2012. He also notes he served in the Army Special Forces from 1980 to 2001.

We offered Mikesell an opportunity to comment about the intersection of his private business with his sheriff job by way of Parkman’s campaign contribution and subsequent contract with iXero but haven’t heard back.

We initially sent an email to Mikesell’s commander and public information officer Greg Couch asking him to pass on our question to Mikesell. Couch also works for Mikesell’s private companies. Here’s what Couch said in response: “This should go to either Jason Mikesell personally or his company website. It isn’t appropriate for the Sheriff’s PIO to respond to questions about personal business matters.”

He didn’t explain why Mikesell wouldn’t think it appropriate to comment on a donation to his sheriff’s campaign during a time he served as sheriff, accepted the donation and was elected sheriff.

In any event, when we hear something from Mikesell, we’ll update.

(The owner of the NEK entity when the explosions were set off was Tony Porterfield of Woodland Park. He doesn’t appear to be associated with the company today. He and his wife contributed a total of $800 to Mikesell’s 2018 campaign.)