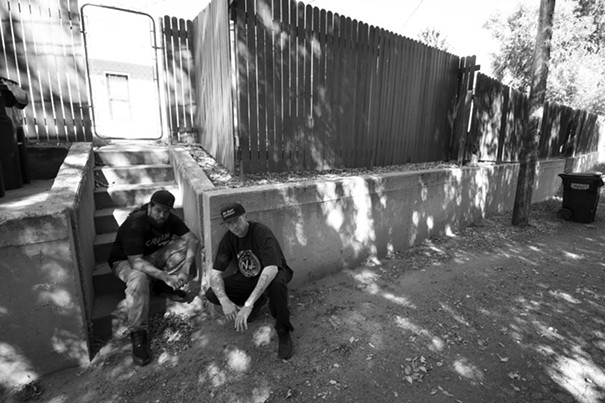 If you’re even casually acquainted with local hip-hop, TEQNiK G, aka Joe Davis, is a name with which you should be familiar. The emcee, hailing from Widefield, has been a fixture of Colorado Springs’ musical landscape for years, a driven and prolific artist who has been putting out consistently strong material since his 2014 EP The Beginning. After just five short years, Davis is set to unveil his sixth release, the full-length LP Embedded, which the emcee considers his best work yet.

Much as the last TEQNiK G record, 2018’s Apparation in the Shadows, was born out of Davis’ collaborations with Michigan-based producer AATMA, his latest effort benefits from the distinct aural stamp of its producer, the award-winning DJ Prominent. Davis had been keen to work with Prominent for several years, and the two artists’ schedules finally converged.

“The album is entirely produced by DJ Prominent, who is considered legendary in the DJ and turntablism world, as well as the production game,” says Davis. “Since I was a young kid growing up in Widefield, I’d heard about DJ Prominent.”

Taking care to keep the project as organic as possible — “in true hip-hop style,” as Davis says — the pair met in person to collaborate on the album’s music, with Prominent often crafting beats live in Davis’ studio. Davis approached the writing process on Embedded with that “timeless” feeling in mind, attempting to craft an album that would both stand the test of time and appeal to listeners regardless of their musical backgrounds.

“I designed the album to have a cinematic feel to it, in the sense that it really feels like a type of soundtrack that takes you through different emotions and stages during the album,” explains Davis.

The soundtrack comparison is an apt one. DJ Prominent’s production — often evoking classic ‘70s soul in a bold, panoramic presentation — is a wildly effective foil for Davis’ fiery vocal delivery and often inspired wordplay. Each song is filled with colorful, sonically rich details to reward repeated listens, from the funky stabs of vibraphones and keys on “Unfamiliar Tunes” to the dreamy, woozy strings on “Destined for Greatness” and “Strugglin Artists.” The timpani accents on the moody “Click Clack,” meanwhile, suggest a particularly cinematic take on G-Funk.

The album also benefits from appearances by some other familiar faces, with Ibe Hustles, Che Bong, eLiMenCe, and Black Pegasus contributing features. The final LP was mixed and mastered by Texas-based engineer Fezzy Harper, who has earned acclaim for his work on releases by Evolve, Three Headed Dragon and Bishop Bagwell, among others.

Especially in a world dominated by streaming media, it’s not a guarantee that artists approach the LP as a cohesive, contained artistic statement. (For that matter, I’ve heard of artists tailoring their running orders to whatever tracks accumulate the most attention as singles.) Davis’ approach to the craft, however, is refreshingly old-school. All of his LPs to this point have benefited from a strong sense of thematic unity, composed with the ebbs and flows of a full album clearly in mind. Embedded, unsurprisingly, is no exception:

“There’s a lot of feeling on this album,” says Davis, as he describes how seriously he took his lyrics and the meticulous process of sequencing the LP. “I think about the songs and how I want them to affect people and teach people. I want them to go through an experience while listening to my music, especially when listening to [a full-length album].”

Of course, TEQNiK G is known for both his albums and his live shows, so it’s natural that equal effort was put into planning the upcoming release show for Embedded, which takes place at the Black Sheep on Saturday, Nov. 16. Joining Davis and DJ Prominent are Stoney Bertz, Bishop Bagwell, eLiMenCe, Che Bong, TMC, Ibe Hustles and Evolve. A full house, and sure to be a good time. After all, as Davis himself says, he doesn’t just throw album release shows, he throws release parties.