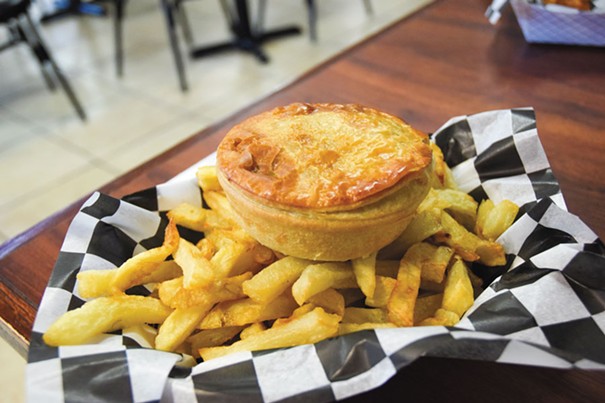 There’s always a measure of adjustment for taste when we’re talking about culinary authenticity. Wider British cuisine tends to feature milder flavors, as does the English pantry in particular. The English tend to consider American food too sweet or too salty, for example. That’s what London transplant Neil Alexander confirms when we talk. He’s one of six partners who own The Chippy, a traditional British fish and chips shop, opened in early October 2019. Managing partner Steve Jones, who’s originally from Macclesfield near Manchester in England, leads the team. Both he and Alexander have lived in the U.S. for 20 years.

“A group of us got together one evening over a year ago and were talking about what we felt Colorado Springs really needed in terms of a British influence,” says Alexander. “The one thing that we felt was missing was fish and chips, and we made the decision to get together and see if we could make it happen.”

The Chippy gets its fresh-caught fish flown in from Iceland every day but Sunday, so it’s some of the freshest seafood one can find in the Springs. We enjoy tender, moist cod and haddock both. The breading’s simple but effective: a thin coat of batter that fries up golden brown and crisp, clinging tight to the fish. Our cod falls apart on bite one, but that’s no problem. If we do have a problem, it’s the understated seasoning, which tracks for an American palate and British food. Consider adding salt at the table. Try also the fish cakes, which mix off-cuts of haddock and cod with potato, green onions and spices, a pretty nice construct indeed.

Chips come portioned generously, bearing a sturdy exterior that’s neither stodgy nor overly crisp, with a tender interior. They’re near-perfect fries, though our server slips up about asking if we want them with salt and vinegar, so on both visits, they arrive unseasoned. Ask for a cup of curry sauce, a mildly seasoned gravy-thick sauce from go-to chip-sauce makers Bisto.

The Chippy doesn’t only offer fish and fried foods, to be clear. They also display a small rack of British snack goods, including biscuits like Ginger Nuts and Jaffa Cakes, as well as Tayto-brand crisps (chips, to us Yanks). We, though, get a sausage butty, a sandwich consisting of sausage on buttered white bread, and we dig the crisp exterior and creamy-smooth interior of the sliced-up meat, though it presents very much a what-you-see-is-what-you-get situation.

We find greater gustatory satisfaction in pies and pasties, made by local Mountain Pie Co. to spec. Our traditional Cornish pasty’s a sturdy, fatty, flaky pastry crust around a mix of steak, potatoes, rutabaga and onions, savory-salty with a subtle root veg sweetness that adds depth. We’re no less delighted by the hand pies, snagging a steak and ale pie in a thick crust that’s sturdy and bready enough to hold in hand, but buttery and moist enough to function. Inside, tender beef sings with black pepper and ale, a simple and fine treat. It’s prepared with care, and like everything else at The Chippy, proves filling and delicious, if not particularly good for the waistline. Cheers.