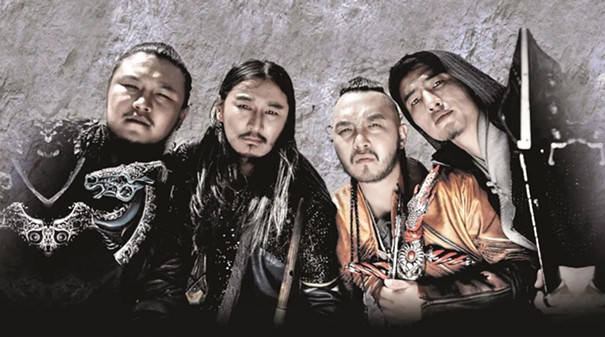 The many subgenres encompassed by the sprawling reaches of “metal” can be so microminiature and hyper-specific that it’s often a bit of a joke, even among its most hardcore acolytes. Naturally, these varied approaches within the genre tend to lead to wildly different sounds, and one that still remains a bit of a wild card is folk metal. And why wouldn’t it? Folk traditions vary greatly throughout the world, so it stands to reason that their metallic counterparts would be equally mutable.

Given the origins of heavy metal, it’s probably no great surprise that a good deal of the music under the folk metal banner draws from European traditions. But on Wednesday, Nov. 27, the Black Sheep offers a chance to catch a quite singular folk metal act that draws from traditional music forms that are still pretty far outside the norm for western listeners.

The HU is a Mongolian quartet of classically trained musicians who infuse their metal sound with spellbinding, overtone-manipulating Mongolian throat singing and traditional Mongolian instrumentation: the morin khuur, or horsehead fiddle, the lute-like tovshuur, the jaw harp, and the tsuur flute. Put all that over some heavy drums and bass guitar, and frankly, you’ve got a pretty incredible sound… certainly not something that’s been overplayed. And while it may sound like a band that would be filed under one of those aforementioned sub-sub-genres and enjoy the appreciation of just a dedicated few, The HU’s self-described “hunnu rock,” it turns out, is a sound with considerable crowd appeal.

The band’s first two videos, Yuve Yuve Yu and Wolf Totem, were viral hits, amassing over 30 million views, waves of positive feedback, and notice from NPR and a bevy of international media outlets. In fact, the response was sufficiently striking that the band soon found themselves appointed official Mongolian cultural ambassadors by the foreign ministry in Ulaanbaatar. The Hu’s highly anticipated debut LP, The Gereg, was released in September 2019 through Eleven Seven Music and followed by their first headlining North American tour, which included an appearance at Chicago’s Riot Fest.

Meanwhile, if you’d never heard of The HU, everyone involved even tangentially with local music should know the brothers Bryan and Sean Ostrow by now, given their massive contributions to the Springs music scene as artists, promoters, venue masterminds, booking agents… the list goes on and on. This week marks the 60th birthday for the Ostrows’ dad (Popstrow, if you will), and the brothers are celebrating in the way they know best — with a show. Everyone is invited to share in the birthday fun at Bar-K on Saturday, Nov. 30, which is marked by a free show headlined by Denver legends Dressy Bessy and featuring, of course, Night of the Living Shred.

Finally, with Thanksgiving arriving this week, I felt compelled to share a musical happening that I was thankful to be able to witness. Guitarist Gerry O’Beirne is a paragon of Irish music, owing to his songwriting, production skills and phenomenal guitar prowess. O’Beirne served as a member of, among others, the acclaimed supergroup Patrick Street, performed with Marianne Faithfull, The Waterboys and The Grateful Dead, and has had many of his songs recorded by some of the most internationally successful Celtic artists, including Mary Black and Maura O’Connell.

I had the privilege of catching O’Beirne live at a house show in Ridgway, Colorado, and it was well worth the journey — O’Beirne’s guitar playing is on the level of a Robert Fripp. It’s quite something to witness from just a few feet away. His already formidable songwriting finds new life through his gifts for humor and storytelling. O’Beirne’s 2000 LP Half Moon Bay is beloved for good reason, and I’d highly recommend giving a listen to his latest effort, Swimming the Horses, which was self-released in May 2019. Even for listeners largely uninterested in Irish folk music, “The Last King of Feothanach” and the alluring title track are beautifully haunting ballads, and O’Beirne has managed to write perhaps the canonical musical setting of James Joyce in “Golden Hair.”