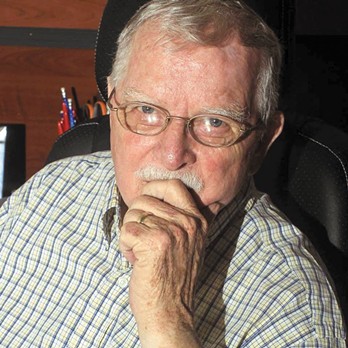 It’s easy, natural even, to read too deeply into the disappearance of former Brush Banner publisher Dane Edwards. His passion and empathy for the ranchers of Brush is evident throughout his coverage. From July of 1975 until his disappearance in December that same year, the man was a firebrand, pushing for more investigations, more resources, more attention to a disturbing problem affecting farmers throughout middle America. He was a journalist who became consumed by the story of regional cattle mutilations, and who claimed — two months before his disappearance — to have solved the mystery.

Those of us who grew up on The X-Files can practically picture the stony-faced men in suits dragging Edwards out of his car and off to an unmarked grave in some remote stretch of Colorado’s eastern prairie. It’s a story that practically writes itself, and may prove that Edwards was onto something big. The truth was out there, and Edwards paid for it with his life.

Colorado’s cattle mutilation history and the journalist who wouldn’t let it go: The Mutilators

It’s a romantic story, but like many romantic stories, it is at odds with objective reality. Dane Edwards, despite his journalistic zeal and fervent desire to get to the bottom of this bizarre phenomenon, came no closer to cracking the mystery of the cattle mutilations than the Colorado Bureau of Investigation, FBI, or the dozens of true believers like investigator Chuck Zukowski.

When Dane Edwards arrived in Brush in May 1975, he was already on his second alias, and his second family. Tobin Edwards of Granbury, Texas, is the middle son of Dane Edwards. “I was born in ’71, so I was pretty young [when he disappeared],” Tobin says. “My dad is a cult figure in my family; this guy is something else.”

Though the residents of Brush believed that Edwards had disappeared in 1975, the Edwards family had actually packed up and moved to Texas. Dane Edwards himself remained behind to finish up some business in Brush and allegedly meet with a book publisher in Denver, as his family settled down South. “He left and instructed her [Mrs. Edwards] to file the [missing person] reports as a smokescreen,” Tobin recalls.

Tobin can corroborate Dane Edwards’ claims of threats against his life. “People were calling the house. My mother received a few of them. They told her, ‘Your husband’s going to get it,’ and then we up and took off.”

However, eventually Dane Edwards disappeared for good after all.

“We moved to California [from Texas],” says Tobin, who was 5 years old at the time. “We were in California for a couple years; we moved back to Texas in ’77. He went to work one day a couple days before Christmas and never came home. I was 7 years old the last time I saw him. I never spoke to him again.”

Edwards relocated to Tyler, Texas, where he started a new family with the name David Ellsworth (we will refer to him by “Ellsworth” from here on). He worked briefly at Tyler Junior College as an instructor, but was fired for failing to provide his education transcripts in 1980.

Ellsworth then returned to writing. He harnessed his zeal for taking on injustice through an innate distrust of police (he compared the Brush police to the Gestapo for enforcing pet ordinances in July 1975), and in 1985 he published a book: Smith County Justice. It was a searing exposé of the Smith County Sheriff’s Office, and its misuse of undercover officers to secure narcotics arrests. The 1991 film Rush is loosely based on incidents Ellsworth describes in Smith County Justice. The book caused a massive scandal, and Ellsworth was once again on the receiving end of death threats.

In the mid-’90s he re-emerged in Mexico, this time as Dr. David Ellsworth, citing an honorary doctorate from the Universidad del Valle de México, which the university was unable to confirm. He founded the International Academic Assistance Program (IAAP), an English-as-asecond- language program that was adopted by 17 federal universities in Mexico. In February 2003, he signed a partnership between IAAP and the University of Louisiana at Lafayette.

IAAP’s website mentions that “[translated from Spanish] IAAP maintains an academic relationship with the University of Louisiana at Lafayette guaranteed by an agreement that provides for the recognition of our programs as courses of preparation for study at the university,” and that “IAAP, SC is a branch of the IAAP, Inc. in Wilmington, Delaware and its courses and programs are recognized by US universities as valid for continued study on foreign campuses.” The Delaware Department of Revenue has no records or licenses for an IAAP, Inc.

Moreover, the University of Louisiana at Lafayette couldn’t provide any information or records about the agreement, other than that it was signed by former president, Ray Authement.

Ellsworth has written a number of other books, including As They See It, which examines historic relations between the U.S. and Mexico, a number of Spanish-language romance novels, and Black: The Ruination of a Race, which is something that will appeal to modern-day adherents of phrenology. No book about the cattle mutilations was ever published.

Ellsworth is a uniquely American figure. A rogue in the style of Don Draper or Jay Gatsby, a man who fought the system when he could, and took advantage of it when he couldn’t. He has certainly lived an interesting life, reinventing himself whenever the need arose. The man is that unique mixture of audacity, courage, intelligence and hubris that we attribute to many of our folk heroes, but he has left behind his own trail of damage, unpaid debts and estranged children, a number of them with the name “Dane.” That name was the unifying thread throughout Ellsworth’s multiple identities, and it was how I was able to track him down.

When a father names a child after himself, it is an attempt at some kind of immortality, some kind of lasting legacy that stretches beyond his meager time on Earth and into the future. Writers, too, share that desire and drive for recognition and renown beyond their years. Ellsworth’s body of work, whether as Dane Edwards in Brush, or David Ellsworth in Tyler, Texas, or Dr. David Ellsworth in Mexico, is a pursuit of timeless themes: truth, justice, some kind of meaning or purpose to things in a world that is generally bizarre, terrifying and unexplainable. Such questing for truth and justice in his written work might seem ironic when you take into consideration the realities of the man’s life, but the details in this article are simply the bullet points.

In a limited email correspondence with Ellsworth, he admitted to a long and interesting life, and compared himself to the figure of Don Quixote. His life is full of weird details and improbable accidents of both his own planning and the machinations of fate. He is one of the last of a rare breed; for better or for worse.