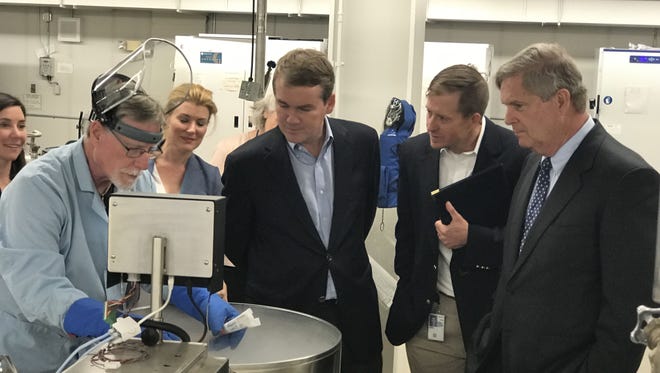 Colorado State University may soon have a member of President-elect Joe Biden’s  Cabinet on speed dial.

Biden is expected to nominate Tom Vilsack, who served as Secretary of Agriculture in the Obama White House before joining CSU as a special adviser, to once again lead the U.S. Department of Agriculture.

If confirmed, Vilsack will carry his deep ties at CSU to Washington, D.C.

Vilsack served eight years in the Obama administration — the longest tenured Cabinet secretary in the administration. He joined CSU part time in 2017 as a strategic adviser of food and water initiatives at the National Western Center and as global chair for the international Board of Counselors on Food and Water Initiatives.

He had an immediate impact on CSU, bringing his deep Rolodex and broad experience with agriculture and water issues important to Colorado and the Rocky Mountain West.

He is believed to be the only former cabinet secretary to ever work for CSU.

Vilsack, who has not been formally nominated yet, declined an interview request from the Coloradoan.

Vilsack was selected in part because of the heightened hunger crisis facing the nation and the need to ensure someone was ready to run the department on day one, according to one of the people familiar with Biden’s decision.

Biden’s relationship with Vilsack goes back decades. Vilsack was an early supporter of Biden’s first campaign for president in 1988 while Vilsack was the mayor of Mount Pleasant, Iowa.

He endorsed Biden a year before the 2020 election and campaigned tirelessly for him in Iowa, the nation’s first caucus state. Biden adopted aspects of Vilsack’s rural policy agenda as Democrats look to make up ground they’ve lost to Republicans in rural areas over the past decade.

When Vilsack joined CSU, he said he wanted to work with young people and farmers in rural America to help bridge the urban-rural divide and foster another generation interested in where their food comes from.

He followed through on that at CSU, helping form Together We Grow, a consortium of businesses and academia — including land-grant universities, historically black colleges, and universities with large concentrations of Hispanic and Native American students.

The program is housed at CSU, putting the university at the epicenter of national efforts to bring diversity to agriculture, from the family farm to board rooms in the country’s largest agribusinesses and every place in between.

Together We Grow expanded in November with the creation of the Center for an Enhanced Workforce in Agriculture, which will be headquartered at CSU’s campus at the redeveloped National Western Center in Denver. While the NWC is under construction, the programs are housed within the CSU System’s office in downtown Denver.

CSU is a key partner in redeveloping the National Western Stock Show campus into a $1.1 billion, 250-acre year-round tourism, educational and agricultural center near interstates 70 and 25.

With the partnership that includes Denver Water and the city of Denver, Vilsack said, “We need to make sure we do something meaningful.”

Vilsack’s wife, Christie, also joined CSU as an adviser working with underserved communities and populations. She is no stranger to Colorado.

Her parents met in Boulder when her father was attending summer law classes and her mother was tutoring his best friend.

They married after Pearl Harbor and often took their three children on road trips to Colorado, including Estes Park and driving the Million Dollar Highway between Silverton and Ouray before it was paved.

USA Today contributed to this report.