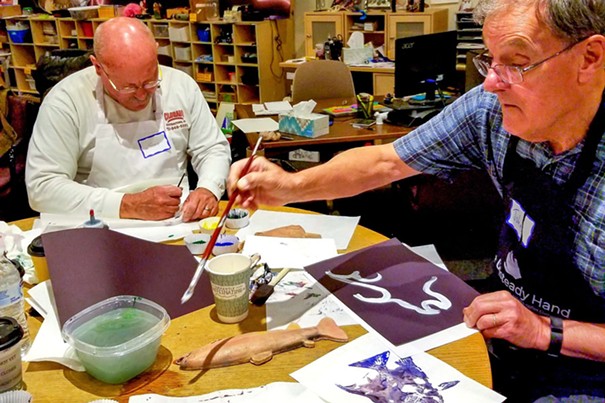 Mo Onstad makes three things very clear: He is not an artist, his work facilitating art programming for individuals with Parkinson’s disease is not about him, and he is not, under any circumstances, defined by a diagnosis.

“I’m one of those weirdos who thinks that Parkinson’s is a blessing,” he says. “To me Parkinson’s has made my life so much better.

“Don’t get me wrong, Parkinson’s sucks, but I’ve lost a relationship that wasn’t so much fun and now I have an amazing relationship. I have Unsteady Hand and I have friends, and I never had friends before.”

Onstad, a lively 51-year-old, founded The Unsteady Hand just about two years ago (he doesn’t recall the exact date but remembers it was a Friday the 13th) after he was diagnosed with the degenerative neurological condition. His nonprofit hosts monthly creative labs for people with Parkinson’s that go way beyond traditional art therapy.

“We work on fine motor skills and community and neuroplasticity and mobility and battling apathy,” he says. “Art is the action — the medium.”

Parkinson’s disease is a progressive nervous system disorder that affects movement, according to the Mayo Clinic. The condition develops after cells creating the neurotransmitter dopamine stop working correctly. Dopamine plays a critical role in sending messages between nerve cells and in how we sense pleasure. As Parkinson’s progresses, patients can become apathetic.

The condition is perhaps best known for causing tremors in the hands and upper extremities, but it is also characterized by slowed or lost movement, muscle stiffness, impaired posture and balance, and changes in speech and writing.

And while exercise has been shown to slow the progression of Parkinson’s, Onstad wanted to offer programming that could help patients stay emotionally well while creating community.

The Unsteady Hand hosts art labs — Onstad insists these are not classes — on the first Saturday of each month at the Imagination Celebration’s iSpace in The Citadel mall. Sessions are taught by professional creatives from throughout the area, and have included everything from book-binding and wire sculpture to painting and sketching.

About 30 people with Parkinson’s regularly attend, and sessions are expected to launch in January in Denver and in February in Pueblo. The program also involves care partners, family members and other supporters.