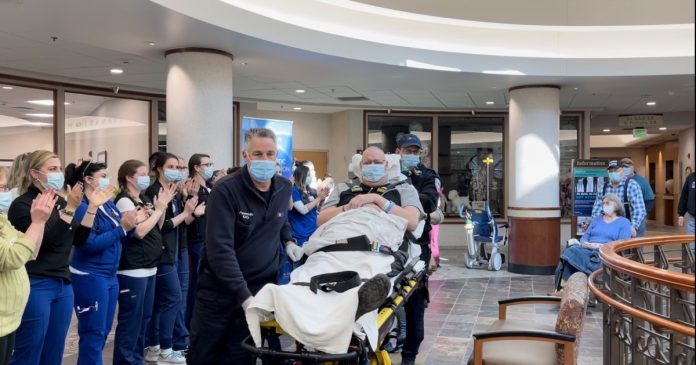 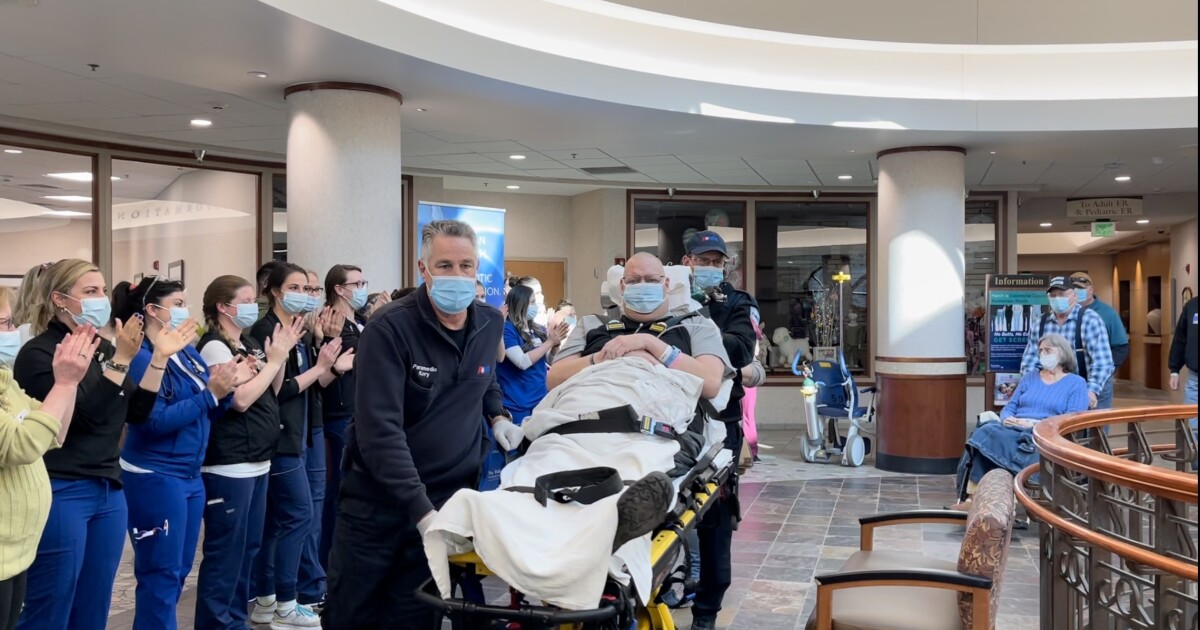 LONE TREE, Colo. — Dozens of medical staff and officers lined the halls at Sky Ridge Medical Center to show their support for an Arapahoe County Sheriff’s Deputy who spent a month on advanced life support fighting against COVID-19.

Sgt. Nate Kyelberg was rushed to Sky Ridge Medical Center on February 1. He spent six weeks fighting for a second chance at life.

On Wednesday, the day of his hospital release, officers from several agencies and South Metro Fire Rescue turned out to surprise Kyelberg with their love and support.

“He is doing really well,. He has made pretty much a miraculous recovery,” said Andrea Kyelberg, his wife.

Andrea saw her husband for the first time on Monday. Strict hospital guidelines prevented her and their children from visiting. She said it’s the longest she’s been apart from him in 27 years.

“It was the best feeling to know that he was finally recovering enough, that we could talk with him and hold him and hug him and just be able to be together,” Andrea said.

James Allbee, Nate’s childhood friend, recounted one of the last conversations Nate had with the doctor before he went on life support.

“I’m not going to make it off a ventilator. Please tell my family that I’m going to fight like hell and that I love them,” Allbee recalled.

He said Nate was struggling to breath and didn’t think he was going to survive.

Allbee said the hardest part was when he sat down with Nate’s parents to discuss funeral arrangements just a couple weeks earlier. It’s why the moment he got the news he could visit his friend on Monday, he took the day off and hit the road.

Kyelberg waved to medical staff and his fellow officers as he was wheeled out of the hospital on a stretcher.

His mother, Stephanie Kyelberg, got emotional. She said her prayers were answered. The last time she saw her son was on Christmas.

“It’s been difficult. I am just so thankful of all the support he’s gotten, all the great care,” Stephanie said.

Arapahoe County Sheriff’s Office Capt. Laurie Halaba said she can’t wait for Nate to return to the force. She said they miss his sense of humor and bright light.

“He has such a positive energy about him and he is missed a lot,” Halaba said.

Nate is now at The Center at Lincoln for rehabilitation.