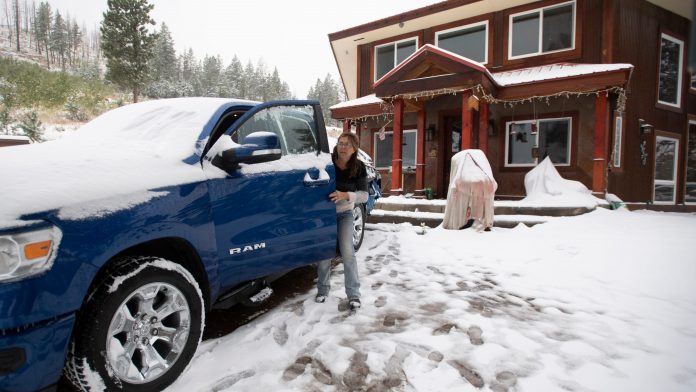 Monday, Louise Creager and her husband were ready to bail from their Rist Canyon home as the Cameron Peak Fire raced closer toward their mountain hideaway.

Tuesday, they were shoveling more than 6 inches of wet, heavy snow from their deck.

Life can change in a hurry when you live in the mountains west of Fort Collins.

In her more than 20 years as a Rist Canyon resident, Creager has experienced three wildfires — including two in the past month with Cameron Peak and Lewstone fires — as well as a flood.

And don’t forget the pine beetles that have left behind swaths of dead trees, providing ample fuel for fires like Cameron Peak.

“So when people say to us, ‘Well now the locusts are going to come’, I tell them we already had that,” said Creager from her deck, as chilly hummingbirds gorged at feeders and snow fell on the High Park Fire burn scar just outside her door. “Been there, done that. Despite all of that, we’re happy here.”

Hundreds of people displaced by the blaze showed up Monday and Tuesday at an American Red Cross evacuation center in Laporte, seeking assistance with housing and meals.

And while Tuesday’s snow allowed some to head back up the canyon, Moore said experience has proven conditions can change in a hurry and encouraged residents to be ready to leave quickly.

These are stories from those affected by the Cameron Peak Fire — including two couples who rebuilt after losing homes in the 2012 High Park Fire — and why some believe the risk of living in Northern Colorado’s fire-prone mountains is worth the reward.

‘Packed up and ready to go’

Creager threw on a winter coat, the day after sporting summer attire, and headed outside to a snow-covered bright blue Ram Dodge pickup fully loaded with belongings.

It’s her and her husband’s getaway vehicle backed up to the front door along with a car in which Creager, a Realtor, can throw in clothes lying on a chair near the front door in case the Cameron Peak Fire behaves like the High Park Fire.

By Monday, the Cameron Peak Fire had grown to more than 102,000 acres, and it was racing Creager’s way. The sky was an eerie orange from the voluminous amount of smoke from the fire burning just 14 miles to the west.

That may sound like a long way, but Creager’s anxiety level was rising like the flames because she knows fire. The couple evacuated for the 2012 High Park Fire as well as for the Lewstone Fire.

“The High Park Fire went 7 miles in four hours,” Creager said. “It flared up so quickly and it wrapped around our house. We know a fire with the right winds can come and take whatever it wants.”

Despite their house being built of insulated concrete-formed construction with metal siding, a metal roof and a good defensible space, it — along with 258 others — was destroyed in 2012.

It took them two years, thanks in part to the 2013 flood that struck a large swath of Colorado, but they decided to rebuild the same insulated concrete-formed constructed house with metal siding and roof as before.

“We could have moved anywhere in the world, because our kids were in college,’’ Creager said. “But my husband said he had one more house he could build before he was done. We talked about retiring and moving someplace else. But we love this community. Though, I think if this happens again we would not rebuild, as building a home yourself takes a lot out of you.”

So does yet another fire.

“The anxiety is much bigger this time around because it’s been three weeks with evacuations on and off with the Cameron Peak and Lewstone fires,” Creager said. “With the High Park Fire, you were gone right away for three weeks. This time we are waiting it out but packed up and ready to go.”

Michael McCarron and his wife, Lizz Grenard, literally picked up the pieces of the home they lost during the High Park Fire in 2012 and put it back together, only to be forced out again Monday by another wildfire.

Their new home, just west of Stove Prairie Road near its intersection with Old Flowers Road, was rebuilt with charred timbers they were able to salvage and run through a neighbor’s mill, McCarron said Tuesday at an American Red Cross evacuation center at Cache la Poudre middle and elementary schools in Laporte.

He was at his home until about 4 p.m. Monday, he said, when he learned from a neighbor of a mandatory evacuation issued for the area because the rapidly growing Cameron Peak Fire had jumped a fire line along Pingree Park Road a few miles to the west.

“Here we go again,” McCarron said. “I gathered some of my art supplies — I have a studio set up there — gathered all that up and headed down the hill.”

With the Cameron Peak fire burning to the west, and the Lewstone Fire burning to the east, he and Grenard had moved their two horses, six goats, several chickens, five dogs and numerous cats to a friend’s property in Loveland about two weeks ago.

“You could tell it was going to get pretty big,” McCarron said of the Cameron Peak Fire, “just because of the density of the fuel in the area. It was so dry this summer it was inevitable to happen somewhere.”

So, McCarron said he watered down the deck of the new home, moved some fuel away to make it more defensible, packed up and left, not knowing what would be left when he returned.

He and Grenard had spent three to four years working through the process for approval of a grant from the Loveland Housing Authority and various permits from Larimer County to rebuild on the site of the primitive solar-powered cabin they lost eight years ago in the High Park Fire.

They gathered salvageable charred timber from the property that has been in Grenard’s family for more than 35 years, ran it through a neighbor’s mill, and with help from Charlie Golden and some other neighbors completed a 32-foot-by-24 foot home, with a deck and the potential to later add a loft, in October 2017. The new home has a cistern and septic system and a metal roof.

“It’s twice as big and built way better,” he said.

But like the primitive cabin it replaced, it’s in the path of a wildfire.

Like many others who had rebuilt homes after the High Park Fire, McCarron said he and Grenard would probably do it all over again if they were to lose this one to the Cameron Peak Fire.

“It’d be a tough call. It’d be heartbreaking, for sure” he said. “But I’m sure we’d rebuild. The neighbor still has a lumber mill.”

“Once you’re there, it’s hard to move back to town,” McCarron added. “We have a wonderful view, even though all the landscape has been burned to the east and the south and north and now to the west — pretty much every direction. The shape of the hills and whatnot, the lay of the land, is the same. We look down into the Poudre Canyon. We’ve got a great view of the summit of Grey Rock. We look out into Wyoming and can see Cheyenne. It’s pretty nice up there.”

Another story from residents:Cameron Peak Fire evacuees who lost home in High Park Fire: ‘We were ready this time’

‘This one is bad’

Jerry Beard and Betty Aab started working at the Glen Echo Resort in Poudre Canyon a few months before the High Park Fire.

That fire “wasn’t as bad” as the Cameron Peak Fire, he said Tuesday.

Beard and Aab had left the resort for two weeks shortly after the Cameron Peak Fire began Aug. 13 because of Aab’s asthma. They spent one week living in a rented cabin at the KOA Kampground in Laramie, Wyoming, and another week at a friend’s home in Greeley.

They returned to the resort in Rustic on Sept. 1 before leaving again Saturday as the fire started racing east along the ridgelines above the canyon.

“It was right over the ridge, on both sides of the canyon,” Aab said.

Within a matter of hours, Mishawaka Amphitheatre went from serving burgers to being enveloped by smoke from the nearby Cameron Peak Fire Monday afternoon.

The fire’s smoke was “practically choking” Grant and Mishawaka’s staff roughly an hour later as they evacuated the canyon coated in swirling ash, she added.

Grant’s first thoughts? “Oh my god, here we go again,” she said, referencing fires — most notably High Park — that have encroached on the beloved Poudre Canyon venue in recent years.

About six to eight inches of snow had fallen around Mishawaka as of noon Tuesday, Grant said, sighing in relief as the icy weather tamped down threats to Mishawaka and evacuation orders lifted along its stretch of Poudre Canyon Road in Bellvue.

Effects of the Cameron Peak Fire come at a time when Grant says Mishawaka is trying to find a footing amid COVID-19 regulations for restaurants and music venues.

Prior to reopening Wednesday, Grant said she doesn’t expect much business — mainly just firefighters swinging through for a free meal — but it’s a way to give Mishawaka employees some hours, especially after some had been displaced by the fire themselves.

In the meantime, Grant said she’s looking toward the winter and brainstorming out-of-the-box ideas to keep outdoor seating open and find ways to bring people back up the Poudre Canyon once it’s safe again.