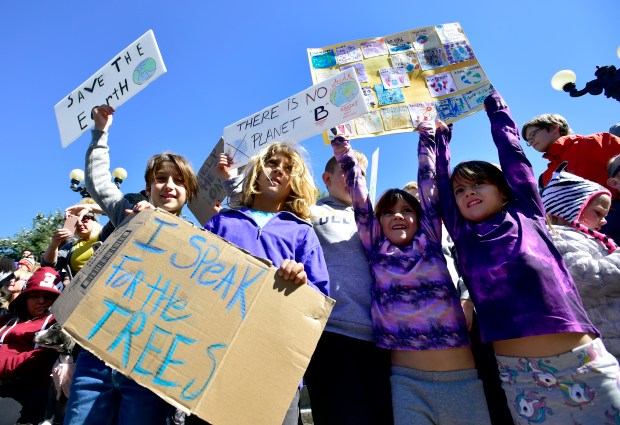 As Greta Thunberg walked on stage to cap Friday’s climate strike in downtown Denver, the kids and adults in the crowd buzzed with excitement, craning their necks to see the 16-year-old Swede who battles the American president on Twitter and is inspiring a generation of young climate activists.

Thunberg took the microphone, prompting screams of “We love you, Greta!” from the far reaches of Civic Center’s Greek Amphitheatre. She looked out at the eager activists and inspired teens, many holding signs emblazoned with her face.

“This is real hope, what we’re seeing right now,” Thunberg told the crowd of children and parents, teachers and indigenous leaders. “This is the hope — the people.”

Indigenous communities of CO helped organize today’s strike. “Stand and protect all things Mother Earth” Ken Frost said. “We have been the caretakers of the land since the beginning of time” pic.twitter.com/ICpyc3j9e7

Thunberg’s fiery remarks last month during a United Nations climate change conference made her an international hero and a lightning rod for critics. On Friday, she headlined the Denver climate strike that brought together youth activists — including many from Colorado’s indigenous and marginalized communities — to add urgency to the fight against climate change and to put pressure on political leaders to take the issue more seriously.

The strike stems from Thunberg’s “Fridays for Future” protests, which began in August 2018 after she sat outside the Swedish parliament to protest the lack of action on climate change. Thunberg’s strikes prompted youths from more than 100 countries to take up the pledge to protest outside the halls of power in their respective cities and towns.

“This is a movement with millions upon millions of people telling world leaders to act on the science, and we are demanding a safe future for everyone,” Thunberg said. “And that is not something you can continue to ignore.”

World leaders, she said, are failing their constituents.

“It’s important for us to be here,” she said, shortly before the day’s events were underway.

“We have 11 years to act on climate change and as a youth organization,” she said. “Our adults, they have done a little but, but it’s not enough and we may not have a future. The youth are showing up and are saying enough is enough and we must take action now… This is a crisis. This is a human rights crisis, and we need to face it.”

“It should not be up to us to take the responsibility,” she said. “But since the leaders are behaving like children, we have no other choice.”

As for Greta Thunberg’s involvement, Baines said, “Greta is here to amplify that we are one of the front-line communities for oil and gas extraction, which has poisoned our air and affected our communities’ health and wellbeing.

“Our front-line communities need to be highlighted for the fact that we are saying enough is enough to oil and gas, and this expansion agenda cannot continue to move forward.”

After her climate protests captured the attention of millions around the world, Thunberg was nominated — and considered a favorite — to win the Nobel Peace Prize. On Friday, the Nobel committee awarded the prestigious prize to Ethiopian Prime Minister Abiy Ahmed.

Her emotional speech at the U.N. excoriating world leaders for their inaction on climate issues went viral, and President Donald Trump’s mocking of Thunberg on Twitter helped turn the Swedish teen into a household name.

Julia Witteman, a junior at the University of Colorado Boulder, said she came to strike Friday because political leaders have not viewed climate issues as urgent. And she came away inspired by the 16-year-old who has become the mouthpiece for a generation.

“I like that she just gets to the point,” Witteman said. “She’s the leader we needed.”

Other Boulder residents attended Friday’s rally. Among them was Alev Erkan and her son Beren Erkan, 8. The Erkans joined roughly a dozen people from their Novel Park neighborhood in traveling to Denver to participate. Erkan said she knew others from her son’s school, High Peaks Elementary, also joined.

“It was amazing. The energy was very high,” Erkan said.  “There was a lot of hope. You could really see that people want to make a difference, but they have been abandoned in many ways.”

Erkan said her family has taken part in a number of climate marches, but this one was special, given Thunberg was there. While Erkan said she didn’t get the chance to see or talk to her, the climate activist’s influence on the younger generation was apparent.

She added that some children from the Novel Park neighborhood were starting their own action plan to take steps to help the environment.

Erkan said she hoped the rally sent a message about the power of speaking up for the environment.

“We are not small,” Erkan said. “We are many and we will make a difference for the future generation.”

Mina Doeble was another student who left her classroom behind for the day to join the protest. Mina, who attends Merrill Middle School in Denver, brought a sign that read, “I’ll stop skipping school when you stop skipping the climate pact.”

“Our generation is being affected by climate change, so we’re the ones that have to live with it,” the seventh-grader said, adding, “Greta Thunberg is awesome.”

Friday’s event also featured traditional Ute songs and incense burnings, along with chants and pleadings, as tribal members young and old reminded those in attendance that their communities are often on the front lines of a changing climate.

Many of the presenters had red and black hands painted on their faces, an ode to the missing and murdered indigenous, black and migrant women and children.

A panel of youth activists spoke about the need to support political leaders who back the Green New Deal; the need to pressure state lawmakers to ban single-use plastic bottles; the need to bring the indigenous community to the table when their issues are at stake.

The crowd featured an array of signs, including several that said “How dare you!” with Thunberg’s face — an ode to one of her go-to phrases that she repeated Friday to thunderous cheers.

As she paused, chants of “How dare they!” emanated throughout the amphitheater.

“We will do this every Friday for as long as it takes,” Thunberg said. “We are rising. We will not back down.”

Editor’s note: This story has been updated with new information and to correct the spelling of Mina Doeble’s name.