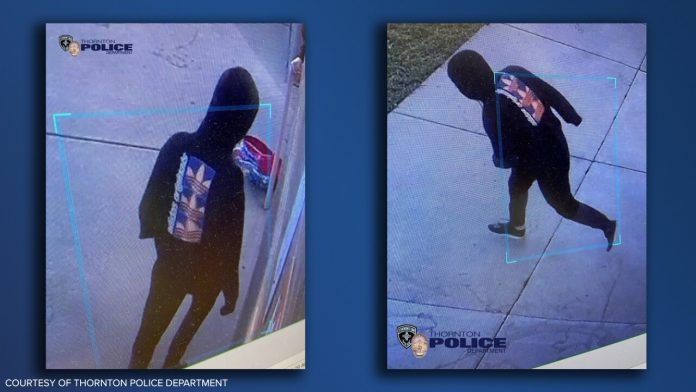 THORNTON, Colo. — Thornton police are working to identify a suspect who allegedly grabbed a 10-year-old student — who was able to escape — on Friday morning.

The Thornton Police Department said the attempted child abduction happened Friday around 7:30 a.m. outside of STEM Launch, located at 9450 Pecos St. The suspect grabbed and tried to remove a 10-year-old female student from the area, but she was able to fight off the person, according to Adams 12 Five Star School. The suspect then ran away, police said.

The child told nearby adults. She is safe and with her family, the school district said.

Police released two photos of the person of interest. No other photos were available.

The person is described as a male standing about 5 feet, 8 inches tall with a thin build. He has blonde hair and was wearing a black Adidas hooded sweatshirt, black jeans, black shoes with white soles, a mask and black gloves. He may be associated with a dark-colored sedan-SUV crossover, police said.

Thornton police are increasing their patrols in the nearby neighborhoods. The school district has asked parents and guardians to reinforce safety skills with their children.

Police said this case is in the early stages of the investigation. No other details were available.