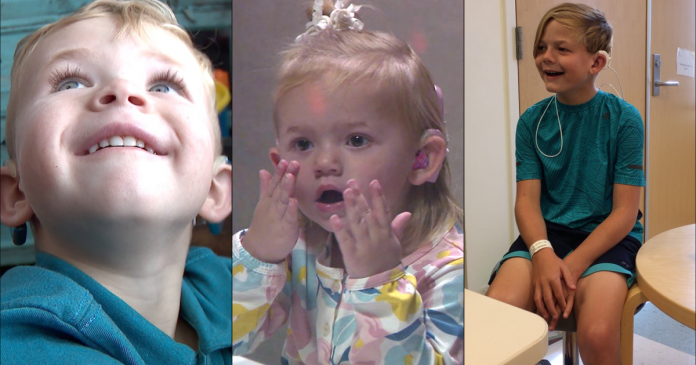 AURORA, Colo. – The sound of children playing could be considered music to the ears of most parents – but what happens when the children can’t hear their parents or each other?

That had been the case for Jackie and Chris Isenberger, of Cheyenne, Wyo., and three of their five children. But life-changing surgeries have allowed the three to once again play, giggle, yell and listen to their heart’s extent.

Adam, 14, is the oldest of the bunch. Following him down the family line are 11-year-old Jackson, 10-year-old Kendall, 3-year-old Cooper and 2-year-old Nora.

“Jackson was a day old when we found out he was having hearing issues,” Jackie said in an interview at their home in Wyoming.

It was Jan. 30, 2008 when Jackie and Chris got the news most parents fear. Something was wrong with Jackson, their second born. He had failed his newborn hearing tests, and Jackie felt helpless.

She said she felt sad and at a loss of what to do.

“I cried a lot, but that’s just from a mom’s standpoint,” she said.

As time went on, hearing aids and speech therapy became a normal part of Jackson’s daily life, and the family moved on.

Their third-born, Kendall, did not have hearing problems like her brother. Chris and Jackie said they believed that Jackson’s condition was simply an anomaly.

But a few years later, along came Cooper.

“We knew right away that he was not passing his hearing screening,” Jackie said.

And then came Nora, who was diagnosed with auditory neuropathy.

“Nora was kind of like a, you know, nail in the coffin. It was like, ‘Yep, this is happening,’” Jackie said. “I kind of looked up to the sky and I was like, ‘What is the deal here?’ … That’s what God intended, so that’s what we’re going to deal with.”

Over the coming years, Jackson’s hearing started to get dramatically worse, and Chris and Jackie were faced with tough decisions as his speech started to trail off and his hearing declined.

Meanwhile, Cooper and Nora were in a race against time.

“Nora, I felt the sense of urgency because she just wasn’t talking,” Jackie said.

“Nora and Cooper, when you’re really young, you have a lot of learning in the first 5 years of your life, so [we were] just trying to get that sound so that they’re not behind,” Chris said.

After some initial reluctance, the two decided cochlear implant surgery was the best option for all three of them.

Starting in late July at Children’s Hospital Colorado in Aurora, all three children had the implant surgery. Cooper went first, followed by Jackson a week later, and then by little Nora.

“It’s a little unusual to encounter a family with so many children with hearing loss and then to do cochlear implants on all of them in such a short period of time,” said Children’s Hospital Colorado Otolaryngologist Patricia Yoon, MD, who performed the surgery on the kids.

The Isenbergers said they felt it was the right time to do all the surgeries at once, but that the recovery period that followed was testing.

“It’s a nine-hour surgery, an overnight stay and then it’s two weeks of recovery,” Jackie said. She and Chris described how the kids could hear next to nothing in the weeks afterward and had a few fits.

Cooper gave little reaction at first, making his parents fear that the surgery hadn’t worked. But it turned out he was just unphased by the new sounds.

“I guess we sounded like little babies talking to each other, and he could not quit laughing,” Jackie said. “Every time we would talk to each other, he would just giggle.”

And finally, with her hearing and speech lagging since birth, it was Nora’s turn. Her parents said they think it took her a little while to figure out what was going on with all the new sounds.

Weeks later, the family was back at Children’s Hospital for some fine tuning.

“They give them a hearing with their current settings, and then they see where they need adjustments at, and they adjust or re-map the processor from there,” Chris said.

“If we were to give patients the full sound that we want them to have on Day 1, it could be very overwhelming to them,” explained Jacqueline Rowley, a clinical audiologist at Children’s that worked with the Isenbergers. “Every patient’s program through the software looks completely different and there’s no easy way to predict what one patient is going to need versus a different patient.”

Jackson is mostly ready for the tests and tuning to be over with, but the audiologists said Nora has been fun to watch as she hears sounds she likely never heard before. Both doctors and her parents say they’re already starting to see results.

“She’s actually interacting more and more with people, “Chris said. She is starting to talk slowly.”

Jackie says that they feel relief that the procedures are done. The audiologists at Children’s Hospital say that there is still a chance that children who receive cochlear implants may have to receive another surgery down the road, but likely not until adulthood. Smaller outer components will be tweaked as the children get older.

Jackie and Chris say they do worry about bullying – but not necessarily for their own children, just for all kids who might be a little different.

“We wanted to share our story to let other families know: Don’t shelter your kids, let them be them, let them adapt, let them figure it out and they’ll be stronger people for it,” Jackie said.

“They can lead a normal life, event with their – I don’t want to call it a disability, but, just a difference,” Chris said.