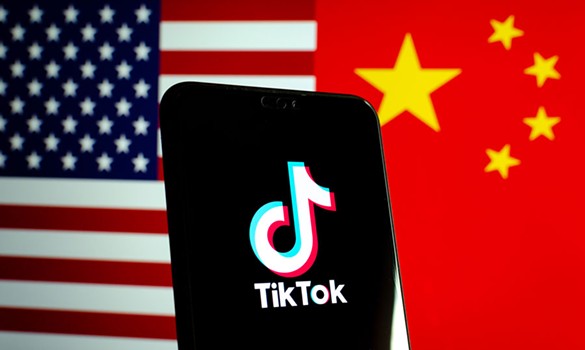 We can always blame it on Ke$ha.

Ten years ago, the dance-pop diva released her debut single “TiK ToK,” a 120 beats-per-minute ode to party-girl debauchery that went 18-times platinum and launched countless parody videos, some of which have themselves racked up more than a million views. As internet music memes go, it all seemed so harmless at the time.

Who would have guessed back then the dire consequences of Ke$ha’s actions? Like those butterflies in the Amazonian rainforest who keep flapping their wings and causing deadly hurricanes half a world away — or that anonymous whistleblower responsible for the greatest witch hunt in the history of the United States — Ke$ha set in motion a chain of untraceable events that has resulted in a far more menacing, but no less oddly spelled, viral phenomenon, one that’s now being identified by the U.S. government as a potential threat to national security.

In the two years since TikTok was unleashed by the Beijing-based tech developer ByteDance, the music video sharing app has recruited more than a billion active users. Together, this unwitting community of comrades has produced an endless stream of homemade short-form videos, in which they dance, lip-sync and perform comic stunts in hopes of achieving 15 seconds of fame in today’s increasingly competitive economy of affirmation. Is it a coincidence that a cover of Ke$sha’s original “TiK ToK,” performed by the J-Pop band Perfume, was among the app’s first videos to go viral?

“If you don’t know what TikTok is, you should,” warned Josh Hawley, R-Missouri, chair of the Senate Judiciary Subcommittee on Crime and Terrorism, earlier this month. “A company compromised by the Chinese Communist Party knows where your children are, knows what they look like, what their voices sound like, what they’re watching, and what they share with each other.”

While Hawley’s statement makes no mention of their souls, it goes without saying that the Chinese Communist Party will stop at nothing.

TikTok, which was initially marketed as Music.ly, is also being taken on by the record industry’s three biggest labels; Universal, Warner and Sony Music are all demanding that the company increase its payments for those catchy 15-second samples.

ByteDance’s counter-argument is that TikTok should not be required to pay as much as Spotify and other dedicated music-streaming services. In an interview with Bloomberg, Head of Global Music Business Development Todd Schefflin also played up the platform’s ability to help recording artists go viral: “A short video on TikTok,” he maintained, “can become a valuable promotional tool for artists to grow their fan bases and build awareness for new work.”

An oft-cited example is “Old Town Road,” the genuinely annoying collaboration between Lil Nas X and Billy Ray Cyrus that, in just a matter of weeks, went from TikTok meme to a record-breaking 19-week run at the No. 1 spot on the Billboard singles chart.

Would the world really be that much better a place without it? Undoubtedly. But the same could be said for Nickelback’s “Next Contestant,” Mia Khalifa’s “iLOVEFRIDAY” and numerous other songs that TikTok users have rescued from the dustbins of history.

Meanwhile, numerous pop stars are creating their own TikTok channels, including Miley Cyrus, Ed Sheeran, Cardi B, Nick Jonas, Nicki Minaj, Post Malone and, of course, Britney Spears. Needless to say, Ke$ha is also among them.

Epitaph Records’ Brett Gurewitz, a longtime member of the band Bad Religion, is characteristically gloomy about TikTok’s use-value. “It’s what we saw with Chuck Berry getting a Cadillac instead of royalties,” the indie label owner recently told Pitchfork. “It doesn’t really matter if it’s vinyl or an app, every time there’s a new way of doing music, the creators always get screwed.”

Meanwhile, back in our nation’s capital, The Washington Post has created its own TikTok account, which is intended to “showcase the action inside the newsroom,” but mostly demonstrates how slowly 15 seconds can pass. Daily posts have included a reporter trying to leave her desk at 5, another staffer walking down the hall wearing a jacket with a colorful tiger embroidered on the back, and the news team discussing The Bachelorette. Also, a hamster.

As for the national security investigation itself, things aren’t going too well. Last week, TikTok took a page from the Trump playbook by declining a request to appear before Hawley’s subcommittee. Unlike our commander-in-chief, they did so politely, claiming to need more than a week to provide “a witness who would be able to contribute to a substantive discussion.”

Hawley and his colleagues retaliated by holding a hearing without them, leaving an empty chair at the witness table to underscore the company’s flagrant disregard for the rule of law.
“They should have been here today,” declared the no-nonsense chairman, demanding that TikTok must appear before his committee, under oath, “to tell the truth about their company, about its ambitions, and what they’re doing with our data.”

After all, there’s no shortage of other data-mining services right here in the U.S., all of them dedicated to fostering better decision-making, increased productivity, reduced costs and improved customer service.

Likewise, there are plenty of TikTok alternatives, from Instagram to YouTube, where dogs can wear scrunchies, Britney Spears can contemplate global warming, and Chipotle can strive to make singing tortilla chips go viral. At a time when America is doing everything it can to halt the spread of communism, it’s the right thing to do.