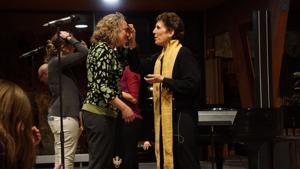 The holiday season really can be the best time of year, a time of families and fellowship, carols and gift-giving, bells on bobtails making spirits bright and all. But for many of us, especially those of us prone to anxiety or depression or other mental health challenges, it can be the hardest time of year.

Why does Christmas bring out these angst-like feelings for so many of us? Partly because expectations of joy are higher — ‘tis the season to be jolly after all.

“It a time when we’re expected to party,” Cubbage said. “We’re expected to give gifts and be friendly and sing songs and people start saying to people who are sad, you need to just get over it. It’s been a year, it’s been two years or whatever it is. And I think that at Christmas time, there’s a lot more of that. And it causes these folks to feel like there’s something wrong with them, which is, you know, self-fulfilling prophecy.”

Cubbage thinks the faith community has a special ability and responsibility to help people through their psychological issues at Christmas time, and other times.

“I really think we do because we have a message of hope that we continue to hold out. Most of us are not licensed social workers or psychologists or psychiatrists. So, what we can do is walk beside them, offer them resources when we have knowledge of those and provide a safe space. Too many people who have mental health issues are maligned not only by the religious community but by many. Most people can’t ‘just get over it’ on their own. They need somebody to walk beside them, or to offer them a space.”

Most of the people who come to Cubbage’s Blue Christmas ceremony are not from her congregation, and many of them aren’t particularly religious.

“A number of the people have passed it along and say, you know, you lost your husband this year or your dog just died. … Why don’t you come with me?”

Mental Health: A Crisis in Colorado | A yearlong series

Dr. Lisa Miller, whose life work is building bridges between spirituality and psychology, seconds that notion that spiritual tools are essential in dealing with depression, alienation, and misery, whether you’re religious. And especially for the young among us.

“No matter which way you point the scientific lens, spirituality is the cornerstone of mental health,” said Miller, director of Clinical Psychology at Teachers College, Columbia University, and author of “The Spiritual Child: The New Science on Parenting for Health and Lifelong Thriving.”

“We have 20 years of science, it is not an opinion, it is a fact that deepening a spiritual life and spiritual development through puberty and adolescence and young adulthood is the most important work a young person can do. There’s nothing in the clinical or social sciences that can profoundly protect us against recurrent mental illness, against addiction, and that is as profoundly curative as a personal spirituality.”

What does Miller mean by personal spirituality? She’s talking about the verbs of religion more than the nouns, which none of us are going to agree on in the long run. But the verbs we can agree on: the cultivation of deep relationships, of connection to something greater than yourself, of empathy, immersion in nature and altruism.

“You need relationships based on spiritual values, you need a deep personal practice of connection to God or a higher power, and we need a place in nature, a spiritually engaged brain has a lot in common with nature. We’re part of nature, we’re one with nature, and when we’re in nature, we realign. Also essential to spiritual formation is altruism.”

When we have those four things, study after study now shows that a child is 80% more likely to avoid major depression, she said, and they are happier, more optimistic, more thriving, more flexible, and better equipped to deal with life’s ordinary traumas than those who are not.

As a parent of two teenagers, that’s a reassuring message to hear during this season.

It’s funny, but I’ve always thought there was a nostalgia and wistfulness built into a lot of Christmas carols, a sense of a purer feeling of Christmas in childhood. And this Christmas, I’m feeling not just nostalgia for the wonder of Christmas during childhood, but for when our country’s backdrop was more spiritual, when the spiritual was more integrated into our daily lives. It’s a nostalgia I think for the carol singing on street corners, for hosannas and hymns and menorah lightings, but also for a time of deeper meanings and shared values. For values in general as the heart of our enterprise. I’m feeling an acute nostalgia for goodwill toward men this Christmas.

“In an effort to be more inclusive, we made a mistake,” says Miller. “We threw the baby out with the bathwater. We’re naturally spiritual beings.” Our necessary quest to better embrace diversity has gotten us away from a focus on commonality and oneness and essential spiritual practices, perhaps.

So how do we cultivate that “personal spirituality” that might bring back some of that shared sense of purpose and meaning in this divided time, and might even better protect us and our children from the psychological traumas the season throws at us?

At Cubbage’s Blue Christmas service this Wednesday, there will be a lot of singing and candle-lighting, some silence and reflection, and a simple, clear message of hope and loving oneness, kind of like a communal Christmas Anonymous therapy session, she admits. And Cubbage will have lots of secular music, a nod to the spiritual at work in the every day.

“So, for example, this year we’re doing “Angel” by Sarah McLachlan and “Madworld” by Gary, Jules and Michael Andrews, and “Keep Holding On” by Avril Lavigne.

“And we have a lot of poems that are not necessarily tied to Christianity, but there’s definitely a hope in something larger.