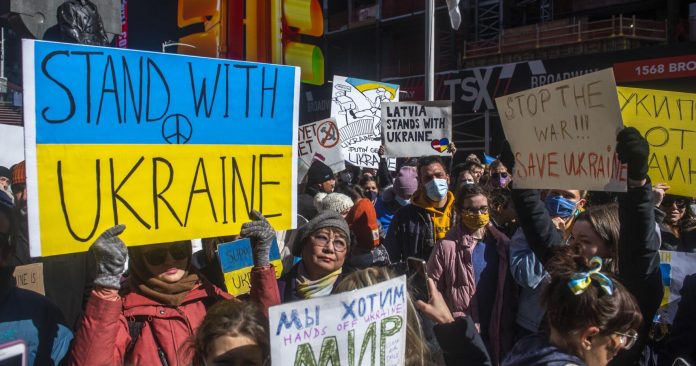 Why should we Coloradans, 5,000 miles away, care about Vladimir Putin’s invasion of Ukraine?

The answer is simple. This is the Berlin of our generation.

This is the absolute front lines of democracy against the dark forces of dictatorship.

This is the new flashpoint in the long struggle to create a more democratic world.

And if we lose Ukraine, a country the size of France, it will be the biggest setback for democracy in a long time.

With its 44 million people, Ukraine is the biggest democratic experiment in the last 30 years. If it disappears from the free world, it’s the end of this whole post-Cold War era of globalization and democratization and the beginning of something much darker, I fear. A second Cold War even.

And make no mistake, Putin is targeting democracies everywhere, not just Ukraine. In his rambling speech before launching his invasion, he said this: “Therefore, one can say with good reason and confidence that the whole so-called Western bloc formed by the United States in its own image and likeness is, in its entirety, the very same ’empire of lies.'”

Freedom House just came out with a report that shows we’re in year 16 of a “democracy recession.” Political rights and civil liberties have declined worldwide over the past 16 years, according to “Freedom in the World 2022: The Global Expansion of Authoritarian Rule.”

“Authoritarians in every region are working together to consolidate power and accelerate their attacks on democracy and human rights,” the report said, “raising the prospect that autocracy could overtake democracy as the governance model guiding international standards of behavior.”

The loss of Ukraine would tip the balance of the world further toward authoritarianism as the dominant political model. As of today, some 38% of the world’s people live in countries rated “Not Free,” the highest proportion since 1997, Freedom House reports. Only two in 10 people live in “free” countries.

“Democracy is in real danger all over the globe,” said a former colleague, Michael Abramowitz, now president of Freedom House, in a press release. “Authoritarians are becoming bolder, while democracies are back on their heels. Democratic governments must rally to counter authoritarian abuses and support the brave human rights defenders fighting for freedom around the world. At the same time, democracies should also be looking inward to strengthen their own institutions and prevent homegrown efforts to undermine the separation of powers and the integrity of elections, which are both indispensable to democracy.”

No question Ukraine wanted to be part of the free world. Ukrainians already have a cooperation agreement with the European Union. And Europe and America have tried to help Ukraine grow a democracy in many ways. The problem is Ukrainians live next to a bully.

A close watcher of Russia I know said Putin’s methods resembled a bully trying to despoil his neighbor’s yard. What Putin wants to do is make it so messy that you can’t actually have any guests over. “Putin is like some urban hood who controls 10 blocks, and he just told the cops I’m taking two more,” the Russia expert told me.

Much of our foreign policy after the Cold War and the Soviet collapse was aimed at trying to help countries in the Soviet space become capitalistic and democratic.

The Soviet Union split apart into 15 republics by 1991, and only five became real democracies: the Baltic states of Estonia, Latvia and Lithuania, and Ukraine and Georgia. Ukraine is the biggest.

Many once-promising candidates for democracy are now lost, including Russia itself. Don’t forget: In the Boris Yeltsin and Mikhail Gorbachev era, Russia experimented boldly with becoming capitalistic and democratic.

But under Putin, Russia is turning into a kind of “Frankenstein of fratricide,” as the Russia expert observed, killing small brothers who did become democratic.

Democracy in Turkmenistan is gone.

But my guess and hope, after talking to former colleagues who have studied Russia closely, is that Putin has misjudged the West’s resolve, underestimated how fiercely Ukrainians will fight, and overestimated his support among the Russian people for this misadventure. We’ve already seen protests within Russia, and Russia’s people are highly integrated into the internet. They will see when casualties start to mount.

David Hoffman, who authored the book “The Oligarchs: Wealth and Power in the New Russia,” has written that it is really the rich clans, formed by the country’s wealthiest tycoons, that are the real power, “the men who owned and ruled the new Russia.”

If the clans attached to the current batch of oligarchs now loyal to Putin come to believe the economic costs of sanctions are too high, you may see them force Putin out of office. This may actually turn out to be Putin’s last hurrah.

We Americans stood by Berlin those many years ago. We airlifted supplies to the encircled West Berliners. We stood steadfast against Communism during the Cold War for 40 years until the Berlin Wall came down in 1989.

Colorado’s governor agrees that we Coloradans need to stand by Ukraine at this pivotal moment.

“Colorado will not stand for this attack on freedom and democracy,” Gov. Jared Polis said. “Our country must make Putin pay and continue to use our economic power to push back on Russia’s aggressive invasion of Ukraine.” Polis outlined how Colorado “will welcome Ukrainian refugees, divest from any potential Russian state-owned assets, urge higher education institutions to review and reconsider any grants or projects they have with Russia and divest endowments from Russian-owned assets while evaluating and terminating any state contracts with Kremlin owned entities.”

When President John Kennedy visited Berlin as the Berlin Wall was going up, he said: “Freedom is indivisible, and when one man is enslaved, all are not free.”

Today, it looks like we are called upon to carry the fight forward at a new flashpoint and once again declare our solidarity with the free.

Today, as Kennedy might have put it, we are all Ukrainians.