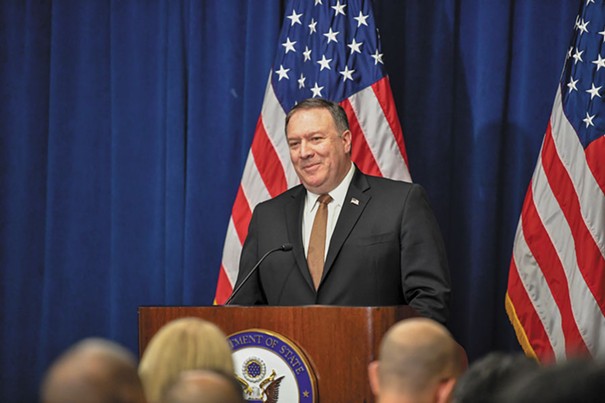 If you watched Donald Trump’s victory-lap speech last Wednesday morning, you know why so many Americans will never rally around him, even in a time of crisis.

It’s not just that most Americans don’t trust him. It’s that he won’t allow it. It seems as if he doesn’t even want it. And as if to prove the point, even a few Trump-enabling Senate Republicans, Rand Paul and Mike Lee, came out with their own anti-Trump ballistics, bashing the administration for telling senators in a classified briefing that they shouldn’t even debate Trump’s policy — if you can call it a policy — on Iran.

Paul and Lee are, of course, from the isolationist wing of the party. And the centerpiece of Trump’s Middle East strategy is supposedly no more forever wars. But here we are.

In Trump’s eight-minute speech to the nation, he wasted no time in blaming Barack Obama for the whole Iranian mess and accusing Obama of funding the bullets that kill Americans in the Middle East. On Obama, it seems as if Trump can’t help himself. You can make your own off-the-couch psychological explanation for that. But politically speaking, it was an unnecessary dig that cheapened the entire exercise for at least half the audience. Oh, and it’s also entirely wrong.

In the simplest terms possible, that’s not how you unite a country when we’re at risk of war. And, yes, the risk is still very much alive. And it’s not just Trump. Former UN ambassador Nikki Haley, trying to sound as Trump-like as possible, has said the only people mourning Suleimani were Democratic leaders and Democratic presidential candidates. She tried, unsuccessfully, to walk that back, but she should know — that’s not what Trump would do.

And yet, we should give Trump credit. After a nervous night — in which he apparently came very close to escalating the shooting war with Iran — he got one thing right, one really important thing. With an apparent major assist from Iran — which fired more than a dozen ballistic missiles at two air bases in Iraq, but killed no one (except those aboard Ukrainian Airlines Flight 752, which got mixed up in it all) and then followed that attack with an announced willingness to call it a day — Trump stepped off the escalation escalator. So, no hot war with Iran in retaliation for Trump’s needlessly provocative killing of Iranian Gen. Qassim Suleimani. At least for now. Iran had promised revenge, and hitting bases in Iraq where American troops are housed was apparently enough.

Remember the rationale of an “imminent” threat? That’s just so much history now, and we’ll leave it to Congress (or, more likely, The New York Times or The Washington Post) to figure out what really happened. No one would be surprised if the Trump administration might have fudged the truth/lied. Meanwhile, Michael Bennet accused Trump of lying about the nuclear deal that Trump walked away from. And Lee, the Republican senator from Utah, said that the Trump administration briefing on Iran was “maybe the worst” he’d experienced in nine years as a senator and said it was an “insulting and demeaning” message to the 100 members of the Senate.

It’s also insulting and demeaning to all of us. And since we’ve learned that Mike Pompeo was pushing for Suleimani’s assassination for months, it seems unlikely that unnamed imminent threats — which the Trump administration couldn’t name even when asked by senators — were the cause. Lying your way into war, of course, is an old story. Want to replay Gulf of Tonkin or weapons of mass destruction?

In any case, the more important question now is this: Did Iran intentionally choose not to kill anyone — as some are suggesting — or was it just a lucky break? I don’t know. We do know that Iran warned Iraq of the attack, which was as good as warning the United States. And that American intelligence had spotted Iranians getting the missiles ready.

Sadly, that was the only thing that Trump got right. Let’s be honest. Leaving the nuclear deal that had apparently stopped Iran’s development of a nuclear bomb is at the root of this crisis. Iran and its proxies have long been the worst actors in the region, but Iran with a nuclear weapon is a whole other ball game. As we know, Trump went his own way, leaving Germany, France, Great Britain, Russia and China behind to go with “maximum pressure” sanctions against Iran. Now he has promised more sanctions. You don’t have to be a foreign policy expert to understand that if sanctions had been working, there would have been no need to kill Suleimani and risk provoking an all-out war.

This seemed like a moment to step back and see if some kind of new deal was possible. In fact, Trump did have some words of encouragement in that direction, but only after promising even greater sanctions. So now we’re waiting for the next disaster. Iran may have promised no more ballistic missile attacks, but does anyone believe that Iran won’t still be running its proxy wars? Whom would you trust in this matchup? It was just a few days ago that Trump promised that any Iranian attack on a military base would be answered with our “beautiful” new weapons.

And Iran, meantime, will be in a new race to develop a bomb, which Trump promised, at the start of his speech, will not happen. You have to ask yourself how exactly he would stop Iran without massive bombing and without Iran retaliating with real consequences.

And should that day come, Trump will stand, flanked by generals, look straight into the cameras and blame somebody else.