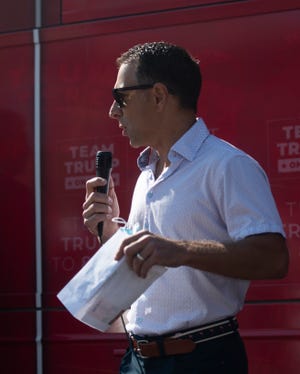 With just over a month left in his administration, President Donald Trump has nominated developer and former Fort Collins City Council member Gino Campana to a federal post.

Pending Senate confirmation, Campana will become chairman of the Public Buildings Reform Board, an independent, nonpartisan board that looks at reducing the federal government’s real estate holdings as a cost-saving measure.

Campana, chair of the Larimer County Republican Party and a longtime Trump supporter, said he was “super humbled” by the president’s appointment. “The president even considering me and believing in my ability to help out this board is a huge honor.”

The six-year term pays roughly $3,550 per week. But Campana’s salary will be pro-rated to days actually worked. “The plan is to limit it to about 60 days a year,” Campana said.

Campana said he applied to have some role in the Trump administration.

“Not unlike in the Obama administration where I tried to pitch in where I could, working with them on sexual assault and domestic violence, I have been reaching out to the Trump administration since the beginning asking how I could help,” he said.

The Presidential Personnel Office interviewed him, “assessed where my passions were and my skillsets and knowledge, and came up with this board position,” Campana said.

“I thought it sounded great,” he said. “I wanted to help out in a meaningful way … this board has the potential to make a huge difference in the deficit and how government is functioning today.”

Legislation authorizing the Public Buildings Reform Board occurred during the late stages of the Obama administration and has taken several years to become fully operational.

The board has a full-time staff that handles the day-to-day operations and recommends properties to be sold or consolidated. The board will evaluate the recommendations, meet with stakeholders and ultimately decide whether properties should be sold, Campana said.

The sites can include everything from high-end office buildings to drainage ditches to underutilized property. “We will do deep dives in evaluating properties that have been short-listed (for sale) by the Government Services Agency and the Office of Management and Budget,” he said. “Then we will do the same thing a developer would do: Evaluate the market, talk to stakeholders, utilize private sector marketing to bring the highest value possible.”

The federal government spends about $15 billion a year on occupancy costs for federal buildings, he said. Money from the first round of sales will be used to renovate and upgrade other federal building in need of renovations.

In two subsequent rounds over five years, the board is responsible for making recommendations for other sales, consolidations, property disposals or redevelopment of up to $7.25 billion.

The first round of potential sales includes land next to the Anschutz Medical Center that “is sitting there idle,” he said. The property has several buildings on it but is “totally underutilized … there is a much higher and better use in redevelopment by the private sector.”

The board will not look at land managed by the Interior Department, such as national monuments and national parks.

Before selling the properties, consideration will be given to philanthropic efforts such as use as affordable housing or for those experiencing homelessness, he said.